Small dogs are very popular today. And among them, one of the leading positions is occupied by Yorkshire Terriers. They are very cute, attractive, and intelligent pets that are owner-oriented and easy to train. There are several subtypes of the breed, depending on the color of the pet. 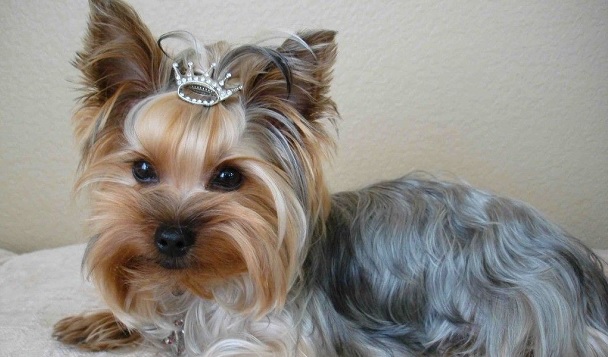 The breed standard clearly states that dogs should have a golden brown tint on the face, paws, and chest. The body of the animal can be covered with gray-steel wool from the neck to the base of the tail.

Important! There should be no silver hairs in the coat. The completely silver color is also considered a defect.

Dogs with gray hair cannot participate in exhibitions, but this does not detract from their exceptional qualities as a pet and an excellent companion. Therefore, such dogs are also involved in breeding, since they have a lot of admirers.

Terriers were bred in England, their history goes back several centuries. Documentary records confirm their existence already in the 18th century. Although this information has not been officially confirmed, experts say that Yorkies descended from medieval rat catchers. That is why in the blood of small pets there is so much hatred for rats and other various rodents. According to some reports, they were used by miners to search for the natural gas underground.

According to other information, Yorkshire Terriers have been known since the first centuries of our era. At the time, they lived in what is now northern England. In the writings of several scientists of that time, there are descriptions of animals that are very reminiscent of today’s Yorkies.

According to the existing standard, Yorkshire Terrier dogs should be friendly, easy-going, easy to train, and also brave. At the same time, the disposition of Yorkies is quite steep, they can start a fight even with dogs that are significantly larger than them.

The exterior of the dogs by the standard:

the ears are small and erect (hanging ears in the breed are considered a defect);

the coat on the dog’s body can be silvery-gray, but the head is obligatory golden brown (the coat should not curl or fluff);

the paws are abundantly covered with hair, and the ears, on the contrary, usually have only short pubescence;

the tail is overgrown with an abundant layer of hair of the same bluish or silvery shade, but of a darker color.

The animal has no undercoat, it gets cold in winter, so the owners try to buy clothes for the pet. In addition, pet hair is hypoallergenic. Such dogs are indicated for people prone to allergic reactions to animal hair.

According to the breed standard, Yorkies should have golden brown hair on the head, chest, and legs, and the body is covered with silver-gray, on the tail, turning into a dark coat. There are other shades of pets, but they are subspecies and are not officially certified, therefore they cannot participate in exhibitions. The completely silver color belongs to these subgroups.

Dogs of non-standard colors do not differ in any way from their relatives participating in exhibitions. They also have excellent health, a strong musculoskeletal system, and are comfortable living in an apartment. Non-standard Yorkie colors are usually chosen by people who want to have a representative of this breed at home.