The Somali cat, or just the Somali, looks almost like an Abyssinian but has a semi-long coat. Activity, indefatigability, and grace – all this went to the Somali cats from the Abyssinian. Somalia is playful, obsessive, does not tolerate loneliness, closed doors, and narrow spaces. However, compared to their closest relatives, they are “taciturn” and rarely vote. 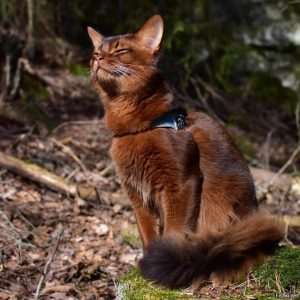 The Somali is larger than the Abyssinian cat. From her ancestor, she received a muscular and plastic body. The head of the Somali cat is like a wedge. The limbs are long enough. Somali cats have a very fluffy tail, thick at the base and tapering towards the end.

The Somali cat breed is one of the most popular in the world. But in Russia, unfortunately, it has not yet gained such popularity.

Somali cats are often compared to small foxes due to their long fluffy tail and apricot-red fur coat. Ethiopia is considered the birthplace of the animal. Although the name of the breed was given by the neighboring country of Ethiopia – Somalia.

This cat breed is characterized by medium size.

A distinctive feature is the eyes. The eyes of this cat are large, almond-shaped, shiny, their color is green or amber with dark edging.

Initially, the color of the animal was brown and copper-red. However, over time, breeders bred cats with matte gray and silver colors.

The coat of the Somali cat is thick, soft, of medium length; the coat is longer on the belly than on the back. The color is very different, but more often you can find dark red, dark brown, and blue.

The character of the Somali cat is very friendly – she is cheerful, playful, understanding, and calm, on average, lives 10-16 years. 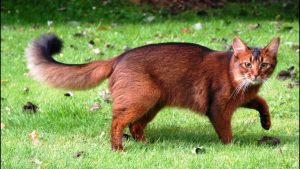 The ancestors of the Somali cat are the Abyssinian cat. It was bred after long-term selection in the USA and Canada. It is divorced in many countries of the world.

When breeding short-haired Abyssinian cats, kittens sometimes show the gene for long-haired hair. For some time, such offspring were considered marriage. However, everything is changing. So, in 1963, the first long-haired representative appeared at an exhibition in Canada. Fluffy Abyssinian cats fascinated everyone, and already in 1965 a new breed was registered, called the Somali. 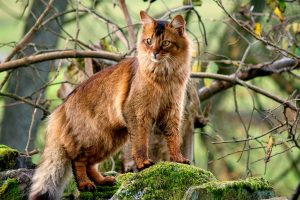 Somalia sheds little, so they hardly need bathing. You should regularly trim your pet’s nails, provide a balanced diet and protect from drafts. The semi-long coat of Somalia, oddly enough, does not need daily maintenance. It is very dense and practically does not tangle, but you still have to comb your pet once a week.

If the cat is pregnant, then she needs to be given as much companionship and affection as possible. The owners should not plan long trips for this time and in general, it is better not to leave the house for a long time.

The health of the representatives of this breed is excellent, sometimes teeth and gums disturb. Therefore, regular prophylaxis is required.

The colors are the same as those of the Abyssinian cats. Breed defects – white spots all over the body, except for the “necklace”, chin and nose, as well as any deformation of the tail. Extra or missing fingers will also be disqualified. 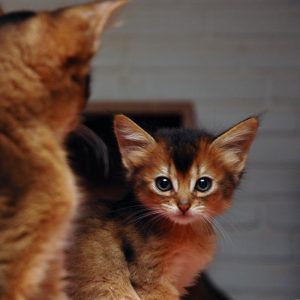 The gene for long hair is recessive. Accordingly, in order to get long-haired kittens, both parents must have it.

Somalia gets along well with young children. They do not release their claws during games and endure unconscious rudeness on their part for a long time. Also, these cats get along well with other pets.