Some aquarium fish have one interesting feature – the color of young individuals is radically different from adults. Looking at such fish, it is easy to mistake and mistake them for completely different species. A good example of this is the starfish cichlid from Lake Tanganyika, Africa. How young and adult cichlids of this species differ, you will learn from our article.

Star trophy (Tropheus duboisi) is a freshwater ray-finned fish from the Tsichlov family. It is endemic to Lake Tanganyika. It is one of the first trophies to enter hobbyist aquariums. In the 70s of the XX century, they made a splash when they were presented to the general public at the next exhibition. The fish owes its name to the attractive coloration of juvenile individuals – white dots are scattered over the black body, exactly like stars in the night sky. Unfortunately, with age, the color of the fish changes dramatically, but the trophy still remains quite attractive. 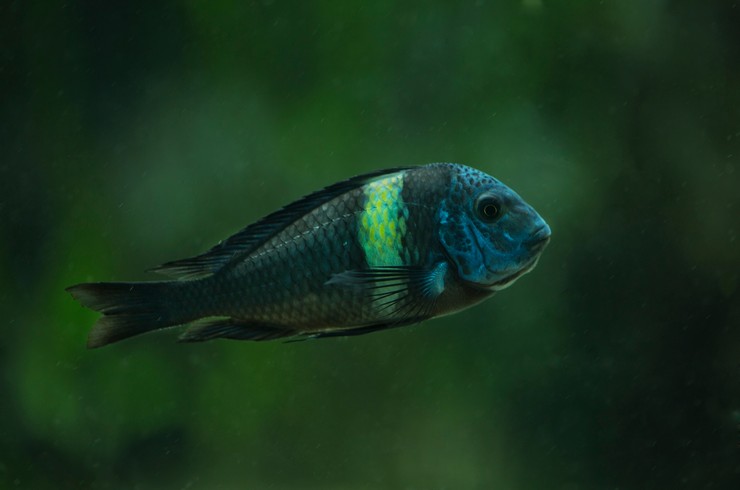 Natural populations of the fish are endangered, the species is included in the International Red Book with the status of “Vulnerable”.

Trophy starfish is one of the most expensive cichlids you can find on sale. Considered a difficult species to maintain and not recommended for beginner hobbyists.

The average body size of a stellate tropheus is 12 cm. The fish has an elongated body and a sloping forehead. The body tapers towards the tail. The head is large with large eyes and a terminal mouth.

The low dorsal fin extends from head to tail, its end is pointed. The caudal fin is single, trapezoidal. The color of young and adult individuals of the stellate trophy is radically different:

Sexual dimorphism in fish is not pronounced.

The homeland of the stellate trophy is the African lake Tanganyika. It has a tectonic origin, and due to relative isolation, just like Lake Malawi, it has become a powerful center of speciation.

The tropheus’s habitat is not continuous, but episodic. The fish is found mainly in the northern part of the lake at depths of 5 to 15 m. The main food for it is algae growing on underwater rocks, so the fish gravitate towards coastal rocks. They live in small groups, due to limited food resources, they are forced to constantly move in search of food.

You will need a spacious aquarium to keep star trophies. Since the fish is distinguished by territoriality and aggressiveness towards representatives of its own species, it is desirable that 80-100 liters of a waterfall on one individual. They contain trophies in harems from a male and 3-6 females or in groups of 10-12 individuals, while females should also prevail. Maximum compatibility is observed when the fish grow together from a young age; they usually do not accept “beginners”.

There are two main approaches to designing an aquarium:

Lake Tanganyika is famous for its stable water parameters. It is very important to provide quality filtration and aeration in the aquarium. A powerful external filter and compressor are recommended. You will also need a thermostat because stellate trophies are lovers of warm water. The lighting can be anything, but usually, it is made bright enough to ensure the growth of algae on the rocks, which trophies happily eat. 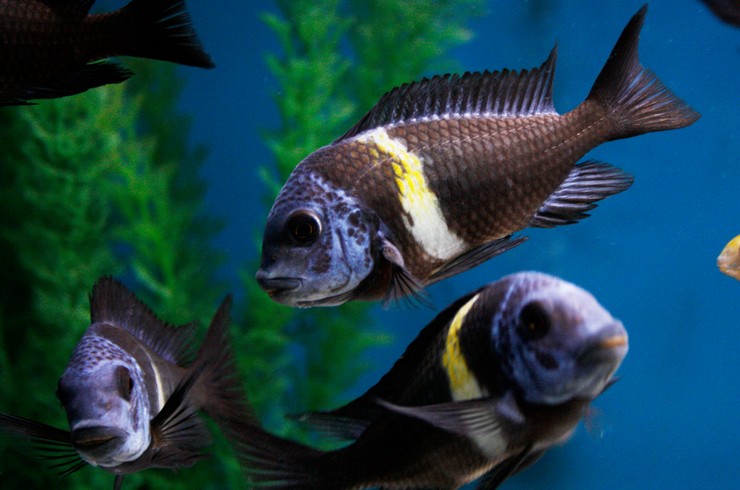 Once a week, 20% of the water is changed in the fish tank. It is highly not recommended to use tap water for substitutions, because it may contain a number of compounds dangerous for fish. The popular method of settling water is not a way out of this situation, because it does not remove all substances harmful to fish, and labor costs are quite high, given the large volumes of aquariums that contain star trophies. The fastest and most optimal way to prepare tap water is to use the Tetra AquaSafe conditioner, which instantly removes chlorine and heavy metals from the water, and also enriches it with useful vitamins and microelements.

It should not be forgotten that the waters of Lake Tanganyika are rich in minerals, which is why trophies prefer hard and alkaline water in the aquarium.

Trophy starfish has a reputation as an aggressive fish, but, as practice shows, not entirely deserved. It is worth noting that cichlids usually treat other fish species calmly, problems arise, as a rule, among their own relatives.

A rigid hierarchy is established in trophy groups, therefore it is recommended to keep them in large communities. In this case, the aggression of the dominant male is significantly dissipated. Also, we must not forget about the need for the correct selection of the aquarium and the organization of a large number of shelters. In such conditions, the skirmishes between individuals do not lead to serious consequences. At the same time, it is important not to allow new fish into the established group, their fate will certainly be deplorable. 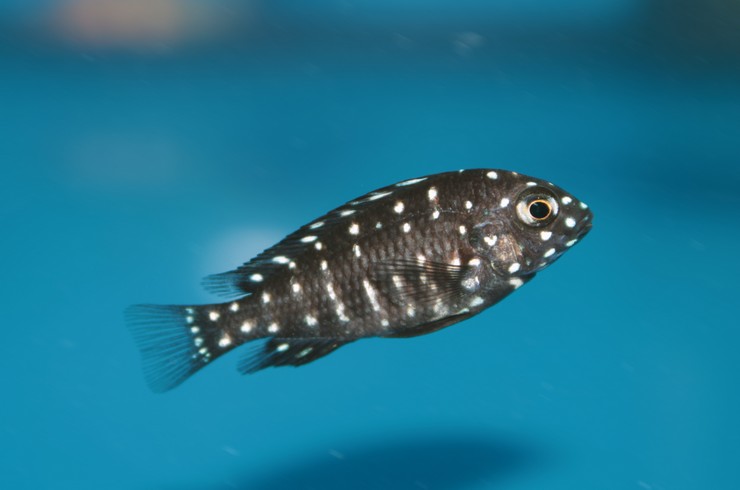 Best of all for joint keeping with stellate trophies are yulidochromis, erythmodus, tanganicodus, synodontis catfish, as well as large irises.

The natural diet of starfish consists almost entirely of plant foods. Fish have long intestines that are used to digest fiber. Any easily digestible food of animal origin (live or frozen) will sooner or later lead to disruption of the gastrointestinal tract and bloating. This can lead to the death of the fish.

Therefore, the most reliable and safe way will be to feed with high-quality dry food with a high proportion of plant components. For example, Tetra Malawi food, specially designed for all types of herbivorous cichlids, is 40% algae, which fully meets the needs of fish for proper nutrition. It is best to use a cereal feed.