Aquarium fish differ significantly in temperament: some prefer to swim slowly and imposingly, while others never stop the active movement. It is to the latter that the Sumatran barb belongs – a fussy fish with a beautiful striped color.

The Sumatran Barbus (Puntigrus tetrazole) is an aquarium fish from the carp family. It has been known to aquarists for over 100 years and remains very popular. Its distribution is due to the beautiful color of the fish, entertaining behavior, and unpretentious content.

The ending “tigers” in the name of the genus is very consonant with the Latin words “Tigris”, which means “tiger” and indicates the striped color characteristic of the representatives of the genus, and the specific name reflects the number of these stripes – four (Greek “tetra”).

Currently, no one catches Sumatran barbs from natural reservoirs. It is not difficult to breed them, therefore, representatives of the species are sold for sale from fish farms from Southeast Asia or from local breeders. It is worth noting that natural individuals have a faded color, and aquarium fish, as a result of long-term selection, can boast of a bright outfit. An albino form was also obtained (golden barb), deep green with a metallic sheen (mutant barb, or mossy), as well as veiled. 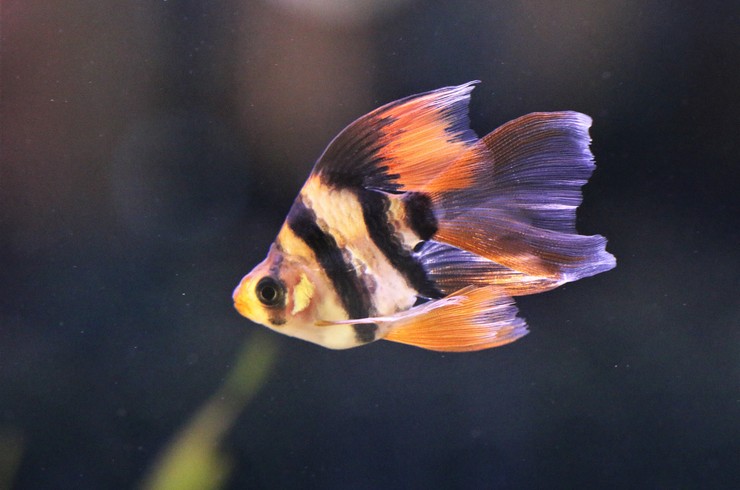 Sumatran barbs never stand still, they constantly scurry about the aquarium, chasing their relatives and other fish. One of the interesting features is the periodic fade upside down at an angle of 45 °. However, if the fish twitch and stand almost upright, then this is an alarming signal, indicating an early stage of poisoning with nitrogenous compounds.

You can often hear that Sumatran barbs are “real predators” and slaughter other fish. In most cases, this is due to violations of the conditions for keeping fish, namely, the absence of a school. Barbs – fish are not predatory, but cocky, and in conditions of solitary or keeping in a small group they can attack other fish. If the number of individuals exceeds 6, then this is extremely rare, because the fish are busy with “showdowns” only with their relatives.

Sumatran barbs are very hardy, they can be recommended as the first fish for novice aquarists.

Sumatran barbs have a tall, rounded body with a pointed head, the outlines of the body reflect the speed of movement. The size of the fish is 5-6 cm. The antennae on the head are absent.

The main body color varies from silvery to yellowish red. Four wide black stripes run across the body. The first is through the eye, the second is behind the pectoral fin, the third is behind the dorsal, and the last is at the base of the tail. For this feature, the fish is often called the tiger barb. 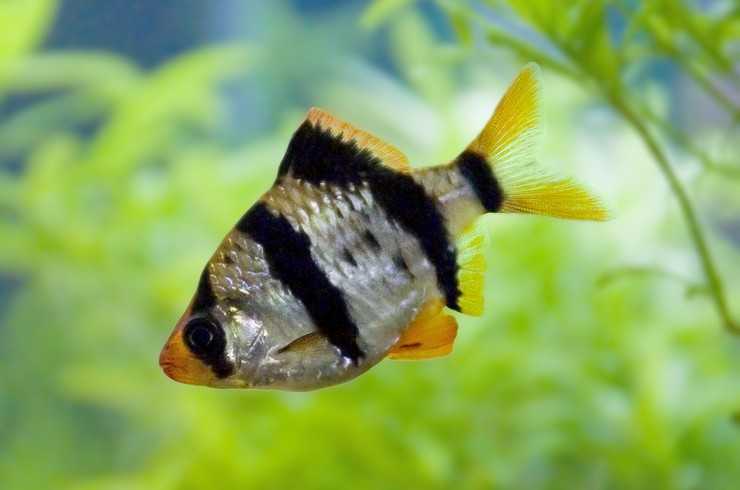 The fin is high on the back, painted black. The rest of the fins are pinkish or red. Males are especially bright during the spawning period. At this time, not only the fins become deeply scarlet, but also the muzzle.

Several varieties of the Sumatran Barbus have been obtained by breeders:

As the species name suggests, the fish originates from the island territories of Southeast Asia: Sumatra, Borneo. Initially, the species was endemic to these islands, but over a long history of development, it spread to the water bodies of nearby countries: Thailand, Cambodia, Singapore. Local populations can be found even in the USA, Australia, and Colombia. 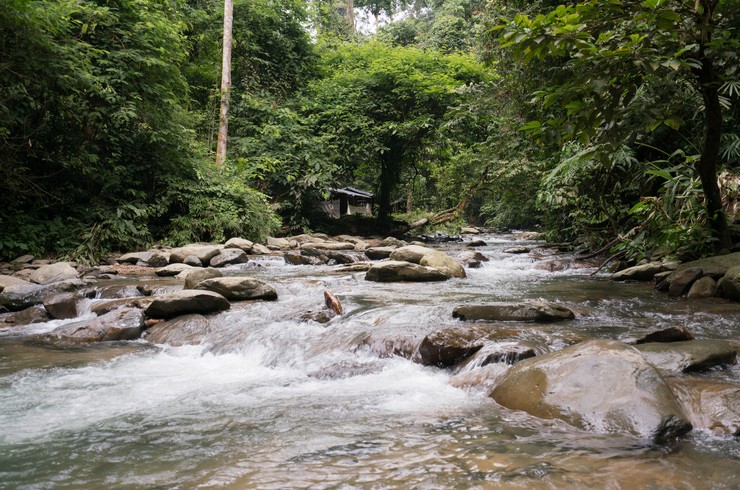 In their natural environment, Sumatran barbs prefer forest streams and tributaries with clear water and a sandy bottom, flowing through the jungle. In such reservoirs, many aquatic plants grow, which serve as a shelter and a place for obtaining food, the water is rich in oxygen.

Keeping Sumatran barbs in an aquarium does not require any special conditions. It is very important that the number of individuals in the flock is at least six, in which case the fish will not bully other inhabitants of the aquarium. For such a number of fish, an aquarium of 60 liters or more, equipped with a lid, is ideal, because barbs that are playing can easily jump out of the water. 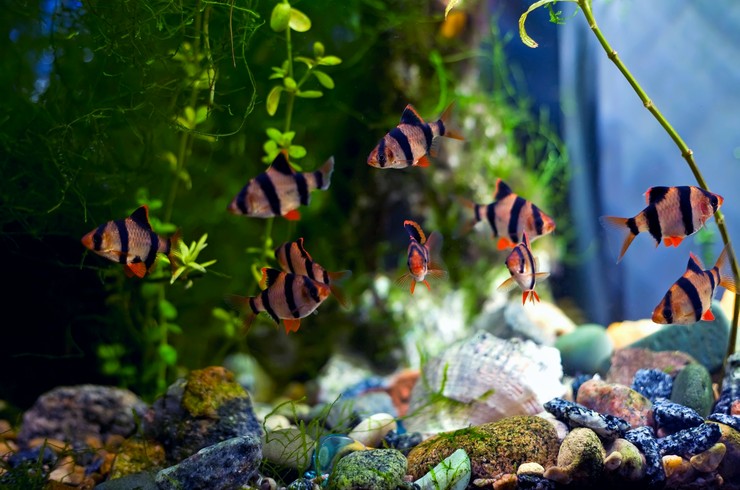 The type of soil does not play a special role. Striped fish look good on sand or medium-sized dark pebbles. Natural driftwood and stones are suitable as decorations.

It is very important to create islands along the walls of the aquarium, densely planted with plants – the fish will hide in them if they are frightened or decide to take a break from too active relatives. Any popular plants will do Kabomba, Echinodorus, Cryptocoryne, Anubias, Vallisneria, etc. It is better to leave the center free so that the barbs can frolic. 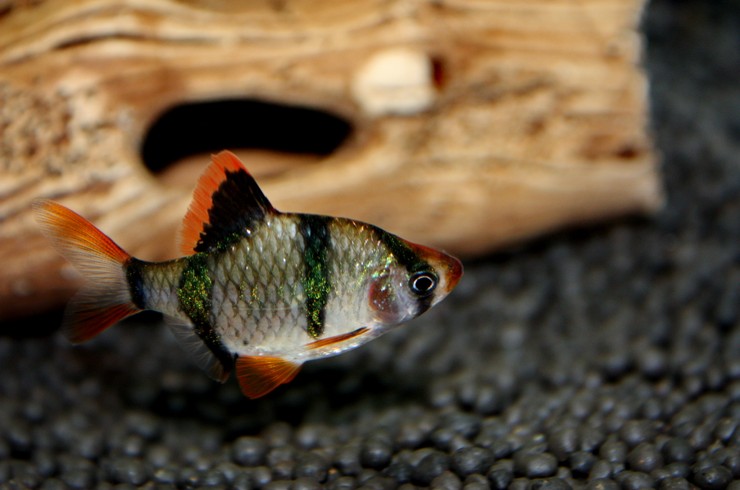 For the comfortable keeping of Sumatran barbs, you will need a standard set of aquarium equipment:

Lighting can be moderate or bright. Movable barbs will not be against the moderate current from the filter, which will keep the fish in good shape. It is necessary to change up to 30% of the volume of water in the aquarium weekly so that no hazardous fish waste products accumulate in the water.

Sumatran barbs are peaceful, gregarious, and very mobile fish that prefer to stay in the middle and lower layers of the water. They must be kept in flocks, otherwise, the neighbors in the aquarium may suffer. It is best to choose fish with a similar temperament as roommates: zebrafish, thorns, congo, iris, tetras. Barbs get along well with any peaceful catfish: ancistrus, corridors, toracatums. 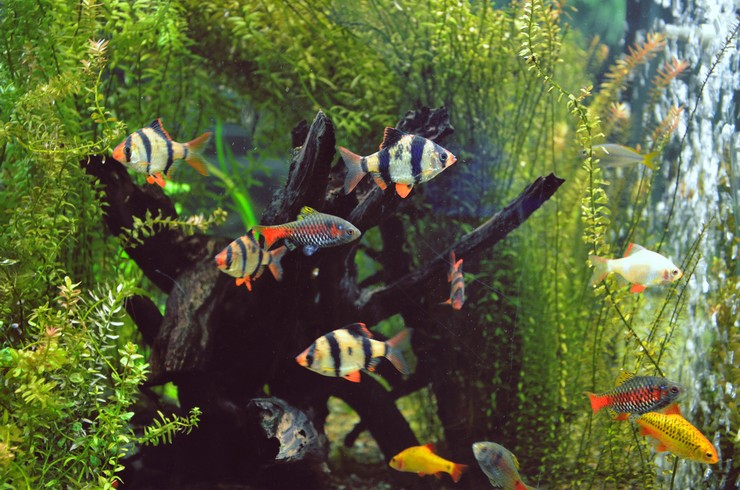 Flocks of different types of barbs are perfectly combined together, they do not show aggression towards each other. This species looks very interesting with clown fighting – another native of the islands of Sumatra and Borneo, which also have a tiger color.

Sumatran barbs are incompatible with slow-swimming fish and owners of long fins (especially veiled ones), which will quickly be bitten. Therefore, fish such as cockerels, golden or scalar fish will not be the best choice. Representatives of the Labyrinth group with elongated pectoral fins (gourami, lalius) are also not recommended to be kept with barbs – there is a very high risk that striped scuffs will bite off the filamentous fins.