The cat is the world’s most popular pet. It is the epitome of elegance and suppleness, but also of speed and agility. Cats master it like no other animal, silently stalking their prey and catching it with lightning speed. Nobody can fool cats when it comes to climbing and balancing. All of these characteristics can be attributed to their physique. From the skeleton to the paws to the sensory organs: a look at the cat’s anatomy.

Contents hide
1 The Cat’s Physique
2 The Size of the Cat
3 Anatomical Differences Between Male and Female Cats
4 The Cat’s Skeleton
4.1 The Spine
4.2 The Cat’s Tail
4.3 The Sternum
4.4 Skull and Teeth
5 The Cat’s Muscles
6 Anatomy of the Cat: Paws and Claws
7 The Digestive Tract of the Domestic Cat
8 The Cat’s Cardiovascular System
9 The Cat’s Respiratory Tract
10 Other Important Body Functions of the Cat
10.1 The Lymphatic System
10.2 The Hormonal System
11 The Cat’s Sense Organs

Domestic cats, scientifically Felis catus, are mammals and are similar to other mammals in their physique. Nevertheless, there are some peculiarities that distinguish cats from other animals and also from humans.

Even if many house cats live purely as house or apartment cats and do not prey on nature, the entire organism of the carnivorous predator is optimized for hunting.

The Size of the Cat

The height of a house cat depends mainly on the breed of the cat. On average, cats weigh between 3.5 and 5 kg. Particularly large breeds can even weigh up to 10 kg. 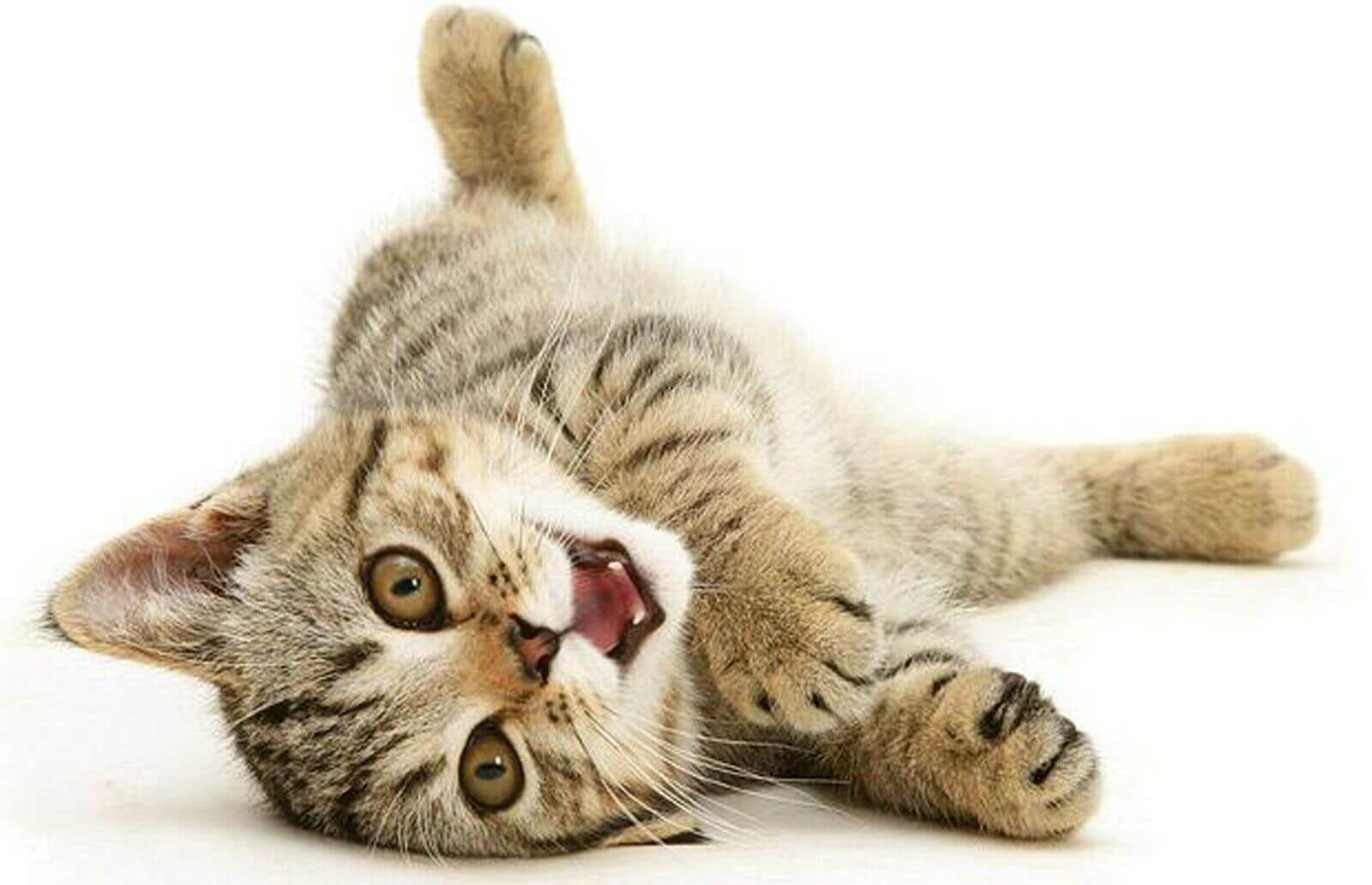 The sex of the cat cannot be identified immediately in newly born kittens. Only after a few weeks will the anatomical differences between male and female cats be recognizable based on their genitals.

In addition to the sexual organs such as the testicles and the penis of the cat, there are other differences in the anatomy of male and female cats: male cats often have a wider head with a pronounced neck, the so-called hangover head. The overall stature of male cats is mostly stronger and wider.

However, the skeleton and basic anatomy are the same for both sexes.

The cat’s skeleton consists of over 240 bones and more than 500 muscles, the interaction of which ensures mobility, speed, and elegance. The exact number of bones varies by breed and tail length, as some cats have more caudal vertebrae than others.

Overall, a cat has about 40 more bones than humans – a considerable number in relation to the size and weight of the cat.

The bones of the house tiger are particularly light and stable, but at the same time flexible, so that the impact is optimally cushioned by the skeleton when jumping.

The spine is the support structure of the cat’s body. The cat’s skeleton has around 50 vertebrae: 7 cervical vertebrae, 13 thoracic or dorsal vertebrae, 7 lumbar vertebrae, 3 interconnected cross vertebrae, and between 18 and 23 caudal vertebrae.

The cat’s tail is an essential part of the skeleton and consists of around 18 to 23 vertebrae, depending on the breed. The cat uses the tail as an important means of communication, for example, to express threat, fear, or joy.

But the cat’s tail also has another important function: When balancing, climbing, and jumping, it acts as a kind of oar to ensure that the cat maintains its balance, hits the targeted target, and lands safely on its paws.

Cats do not have a real collarbone, as we know it from the human skeleton. Instead, the cat’s shoulders are only loosely connected to the skeleton by ligaments.

This special feature ensures that house cats have a narrow chest and can move through narrow gaps. In the cat’s chest area there are a total of 13 pairs of ribs, which serve as a protective shield for the internal organs.

The cat’s skull consists of 29 individual bones, which only grow together after birth when they are kittens. Depending on the breed, the shape of the skull is round or oval.

The cat’s set of teeth consists of an upper jaw and a lower jaw with a total of about 30 teeth. The combination of incisors, canines or canines, and molars is used to grab, hold on, kill and of course, eat prey.

Cats have more than 500 muscles. The muscular build makes the little predators excellent climbing artists. In particular, the strong muscles in the rear back and legs ensure jumping power and speed.

The cat’s muscles are attached to the bone on the sides of the joints and are connected by flexible tendons. The muscles are also involved in the mobility of the spine: Thanks to the numerous muscles in the backbone, cats can turn their bodies by up to 180 ° while jumping and curl up tightly when sleeping.

Anatomy of the Cat: Paws and Claws

One of the cats’ secrets is their paws: cats are toe walkers who only touch the ground with their toes when moving. This not only ensures the cat’s elegant gait but also high speeds and extremely precise and quiet movement when hunting.

There are five toes on the cat’s paw, four of them on the tip of the toes and a rudimentary toe a little higher up. In addition, the cat’s paws are equipped with shock absorbers, the pads.

The thick skin of the bales protects the animals from injuries and cushions the impact when jumping or falling.

Depending on the color of the cat, the pads are usually black or pink. Cats can extend their sharp, sickle-shaped claws if necessary. In the resting position, the claws are held in place by elastic straps and are not visible. Tendons on the underside of the paw allow the cat to extend its claws at lightning speed.

The Digestive Tract of the Domestic Cat

The digestive system is responsible for the intake of food in the body. Because cats are carnivores, the digestive tract anatomy is optimized for the digestion of meat and prey.

The heart, arteries, veins, and blood vessels make up the cardiovascular system in the cat’s anatomy. Oxygen, nutrients, toxins, and waste materials are transported in the cat’s body via the blood system.

The heart itself is about the size of a walnut and beats with a pulse of 80 to 140 beats per minute. The cat’s blood makes up about 5.6 percent of its body weight.

From an anatomical point of view, the cat’s respiratory system consists of the upper and lower airways. The upper airway consists of the nose and windpipe. There are tiny hairs in the cat’s nostrils that filter dirt particles out of the air.

The inhaled air is then moistened in the throat and passed on to the windpipe. The air reaches the lungs via the bronchi. Foreign bodies are bound in the lungs and oxygen is carried into the blood.

Other Important Body Functions of the Cat

The lymph node system in the cat’s body is closely connected to the bloodstream. Some of the lymph nodes can be felt under the skin, others are deeper and cannot be felt.

The lymph nodes and the lymph system play an important role in the immune system and metabolism because they fight infectious agents and are involved in the production of white blood cells.

Hormones play a central role in controlling healthy body function. In cats, hormones are made in the thyroid and pancreas. Hormones responsible for reproduction are produced in the ovaries and testes.

The cat’s senses are optimally matched to the needs of a predator. They have the same five senses as humans: sight, smell, taste, hearing, and touch. However, these are more pronounced than in other animals and in humans.

For example, cats can perceive movements better with their eyes and can also see well in the dark. In addition, cats can hear and smell around three times better than humans.