Which dog names are particularly good for a pug? You can read the answer and many wonderful ideas in this advisory article.

Which Name Goes with a Pug? 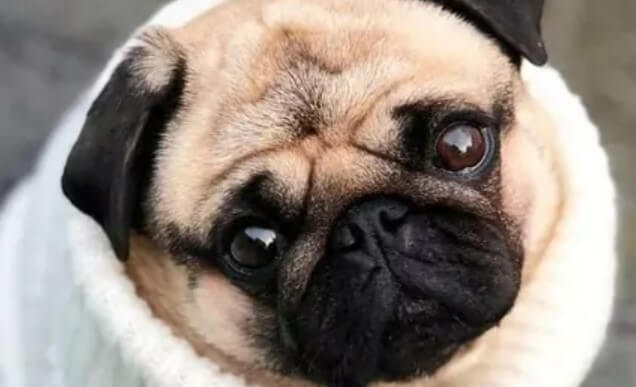 Pug names ideally reflect the lovable and humorous behavior of the small society dog. Because the pug – as it is called in English – is clever and knows exactly how to keep his family in a good mood every day. Therefore, funny pug names – for example from the German or English-speaking area – are perfect to underline your character. Also on the shortlist are sweet pug names with belittling such as Mariechen or Blümchen.

Pug Names: Back to Basics

Googly eyes, an extremely flat muzzle, and wrinkles: the differences between today’s and the original pug are serious. The pug is an ancient Chinese breed of dog that has seen a lot of hype over the past few decades and sadly suffered a lot in terms of quality of life.

Traditional names are reminiscent of the beginnings of the healthy pug, which was not bred under the aspect of the “child schema” with brachycephaly. Based on the retro pug, lovers of the dog breed choose Old High German names that were popular in the fifties or sixties of the last century. Chinese names go even further to the origin – because the Middle Kingdom is the home of the dog breed that is popular today.

Bao comes from China, the home of the pug. It is a short dog name that has various meanings. One of them is “Treasure”. This meaning does justice to the heart on four paws.

The mafioso of the same name is known, but a pug named Chapo can also be very good and good! The translation of the Spanish word is “the little one” – just right for the miniature mastiff-like dog.

Lovers of the dog breed will confirm: With a pug, you can go through thick and thin! The English name Edwin can be translated as “good friend”.

Internationally popular: dog owners worldwide have chosen the German title “Kaiser” as one of their favorites. Since the pug was considered an imperial dog in ancient China, the name goes particularly well with the companion dog.

Why not name a pug after a famous composer? The surname of the child prodigy from Salzburg is tailor-made for a pug with a sublime character.

Does Smarty like “smart”? Exactly! Because the pug is a clever little fellow who understands exactly what his person wants from him. Only with the implementation it sometimes fails, because he is a bit stubborn.

The French call the pug “Carlin”. Based on the French name of the little Molosser, Carla (the free one) is exactly right.

Valuable: A pug bitch named Jemma adorns herself with a very special name. Jemma is an English name derived from the Latin word “Gemma” (in German: precious stone).

The pug is known for his friendliness and warm-hearted character. With the German modification of Helene, a bitch gets a nice name, which is translated as “the beaming one”.

The Chinese name was best known for the Disney cartoon. The main character Mulan is an intelligent and tough girl. This also applies to the four-legged friend, which is often wrongly underestimated!

Like all other dog breeds, a pug is a fur nose of priceless value. The appreciation is underlined by the name Peggy, whose translation is “the pearl”.

Here comes Wilma! This cheeky and cute dog name fits a dog with a character like a glove. The meaning “the will” or “the determined” emphasizes the sometimes stubborn nature of a Pug bitch.