Interest in dogs playing a variety of roles remains high. Especially popular are the breeds endowed with a hunting and guard instinct. The value of such dogs increases if they are used as rescuers, guides, companions.

All these criteria are met by a black labrador. It is believed that the first representatives of this breed appeared in the east of Canada on the island of Newfoundland. But other colors are also established by the modern standard.

Genetics of the Labrador Breed

The English Kennel Club in 1903 recognized only the black color of Labradors, whose history began in the 19th century.

In heredity, the shade of the coat plays a priority role, especially when breeding animals. A combination of genes responsible for this indicator has been identified. This necessitates a thorough study of the pedigree when acquiring puppies. However, experienced dog breeders are confident that this knowledge may not be enough. 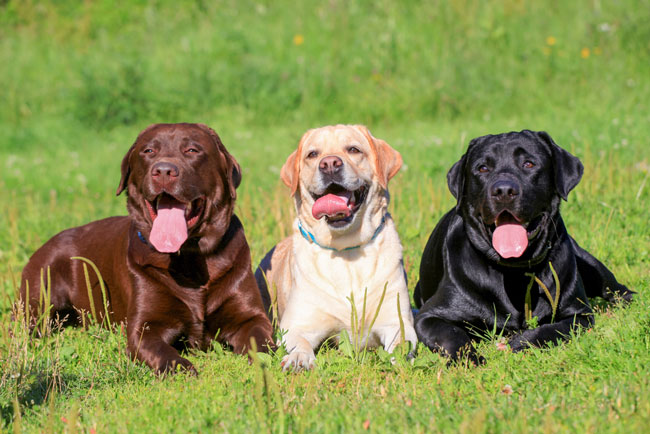 The dominant genes are B and E, which give the coat a black tint. Recessive analogs (b and e) are responsible for chocolate and fawn (yellow) colors.

The Labrador Retriever, according to the standard, can have one of three color shades of the coat. They are the most known and popular:

Black wool suggests a full spread of the resinous background. A slight whitish mark in the chest area is allowed. The nose is characterized by a charcoal tone that can brighten in the autumn-winter season. The presence of pigmentation is considered a defect. The eyes of such dogs are brown, sometimes hazel.

In a milk chocolate labrador, the nose is colored similarly to wool. The iris of the eyes has a greenish tint. The cover of the hepatic tone suggests the presence of a brown nose. Dark brown dogs have eyes of the same color or hazel. The background should be uniform. Only a small black mark on the dog’s chest is allowed.

The fawn color of Labradors has several options: cream, golden, red fox (red, like fox hair). They have a contrasting dark border around the nose, lips, eyelids. The iris of the eyes is a very rich brown. 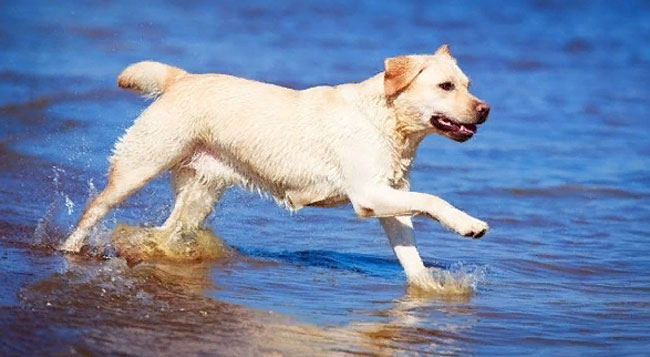 Dudley with blue eyes is characterized by light pigmentation of the eyelids and a pinkish tip of the nose, which is considered a deviation from the standard. Their wool background is creamy, but more often golden.

The Spotted Labrador Retriever does not match the breed purity indicators. But thanks to the original decor, such dogs are acquired in order to get a pet.

Silver (gray) color, also not included in the standard, is in demand. This leads to a rather high price for Labrador puppies, which attract attention with their unusual colors.

Sometimes there are snow-white, considered marriage breeds, animals. If we exclude a very light fawn tone, then we can say that this is an albino.

What Affects the Color

Labradors remain a mystery to specialists. It is quite difficult to guess the future colors of the offspring, even with knowledge of their pedigree. The puppy receives a couple of genes. There are 9 combinations in total. They determine the tone of the coat of the Labrador.

In one litter, as a rule, there are puppies, the coat of which is different in color. There have been cases when yellow or chocolate cubs are born from two black parents. 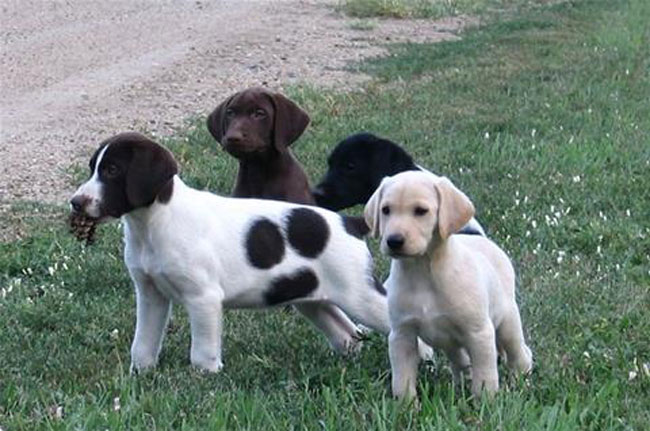 The color of the Labrador visibly changes its saturation at different times of the year. The coat in cold climates becomes denser compared to dogs raised in warm conditions. It is tough and short, usually with a well-developed undercoat, the absence of which is not always a disadvantage, as it can be a hereditary trait or a consequence of shedding.

The Influence of Color on the Temperament of Your Pet

On external examination, it may seem that light, almost white or beige Labrador is more good-natured than a black one. In fact, the color of the coat does not play a significant role, since it does not affect the temperament and habits of the dog.

These animals are distinguished by their quick wit and intelligence. Labradors are charming, which has contributed to their rise in popularity. The character is defined as friendly and reliable.

Labrador possesses a healthy psyche, calmness, poise, therefore it often appears in families with children. The patient dog surprises with the lack of aggression, he is ready to play, stoically endures pranks. Without giving preference to anyone, the dog communicates with household members, feels their mood. Quickly finds contact with animals living nearby. Alone he is sad, begins to miss. 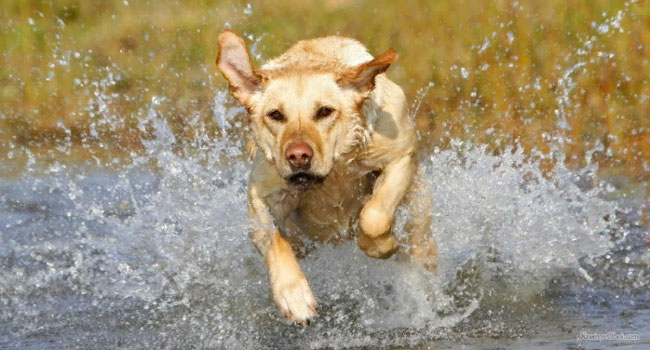 Thanks to their naturally high level of intelligence, Labradors master the proposed rules and commands without difficulty. They are loyal and obedient, therefore they are used as a rescuer, nanny, guide, serve in the police. Dogs even help doctors in socializing children with autism, Down syndrome, or cerebral palsy.

The Labrador cannot cope only with the role of a bodyguard or a watchman. The absence of anger prevents him from attacking anyone.

At home, the pet will always sympathize with the owner if he notices his depression. With proper upbringing, the dog becomes an attentive and loyal friend. He loves when everyone is assembled, so he expresses dissatisfaction when seeing someone off to school or work. Joyfully greets guests, participates in holidays and gatherings. For their character, Labradors are called dogs – angels.

Training a small puppy eliminates cruelty. Physical punishment or shouting is unacceptable. A smart pet quickly understands the requirements if encouraged with an affectionate word or treat. The difficulty lies in the tendency of the dog to gnaw any objects. But if you remove the wires and shoes in a timely manner and gradually impose a ban on him, then the adult Labrador will lose the habit of spoiling things. 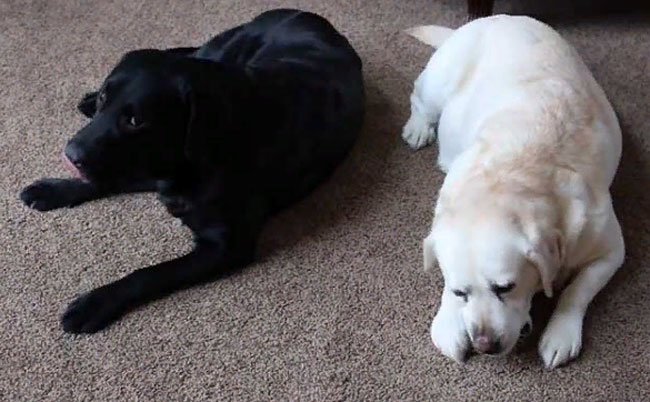 Snacks are contraindicated for the dog, as well as food from the common table. In the menu for the dog, professional feeds with a balanced composition are used. If the puppy is accustomed to natural food, then it is prepared only from high-quality permitted products.

The base is lean meat – beef, rabbit, turkey, chicken. The diet includes cereals, vegetables, herbs, berries, fruits. Sea fish and eggs are given no more than twice in 7 days.

It is noted that the Labrador girl is more affectionate. She is very obedient and easily attached to household members. On a walk, he will not run away in order to survey the territory, so the owner can do without a leash, except during periods of estrus.

The male is curious. He needs to explore the surroundings, communicate with other dogs. In order not to cause a dangerous environment for the pet, they are not allowed to walk freely. 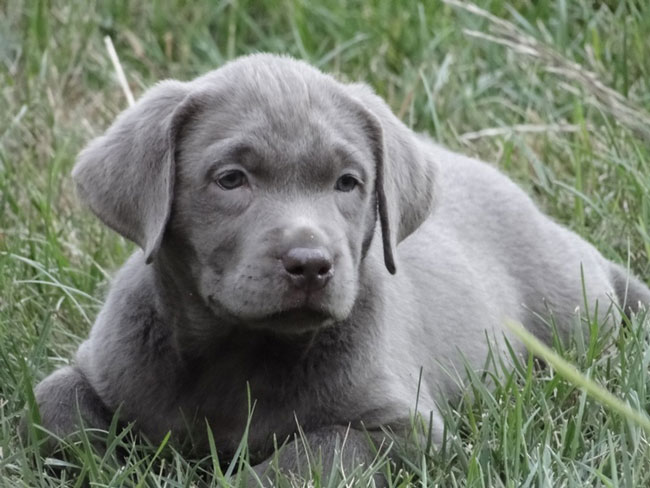 Regardless of gender, the result of competent training is an intelligent dog that amazed with obedience and good manners.

At home, the Labrador will gladly bring a hat or slippers to the owner. You can also trust him with more fragile things – a smartphone, glasses, which the dog takes with his teeth with care.

What Color of Labrador to Choose

Purchasing a puppy with a specific coat color depends on your goal. If you plan to participate fully in exhibition activities or breed purebred dogs, then pay attention to the black, fawn, and brown standardized color. 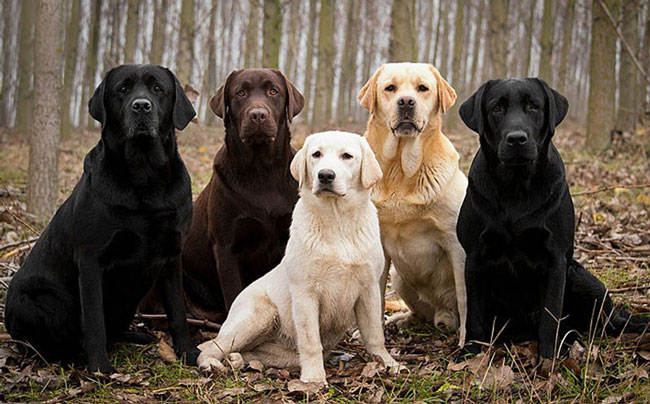 The other color of the coat – peach, sand, silver – does not diminish the merits of the Labrador, since it has no influence on the formation of a devoted character.

When buying, preference is given to puppies of black color with white breasts, permissible according to the standard, which is explained by the desire to raise an outwardly impressive dog. The fact that the coat of this color is less contaminated also plays a role.

It should be borne in mind that it is difficult to photograph a coal dog, for those who like to demonstrate themselves next to a noble animal, it may not be suitable.

A fawn pet, who loves to lie in muddy puddles, quickly becomes covered with spots, which requires immediate water procedures for the Labrador. 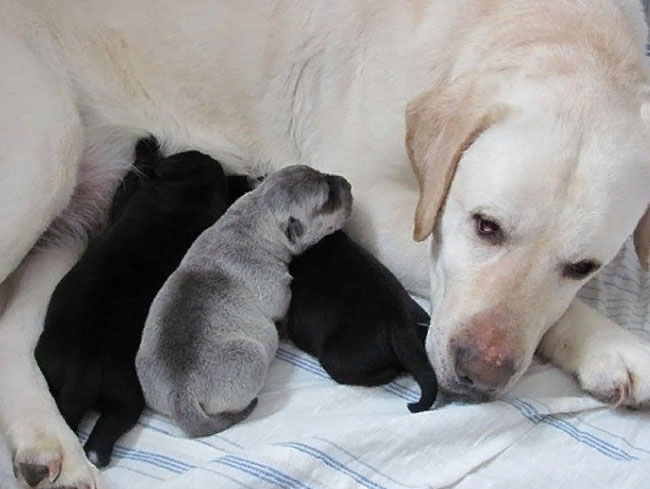 Less common, but very decorative Labrador chocolate is able to change its original shade in bright sunlight, acquiring an uneven color. But this phenomenon is temporary, and should not worry the owner. With a decrease in the intensity of ultraviolet radiation, the color is restored.

Small differences are observed in the structure of the coat. It is tougher in brown and black dogs. They produce a little more natural oils, which makes their surface shinier. In fawn Labradors, the coat is softer and duller. These nuances are noticeable to experienced breeders and do not play a priority role in home maintenance.

When choosing a Labrador color, you can use the recommendation to stay on a shade that will not contrast with the tone of the flooring. This will keep your home clean.

In general, caring for a pet is simple. It is enough to comb it out regularly. A special brush is used, equipped with curved spikes, rather thin, located on a flexible base. Such a device effectively removes the falling undercoat and tough awn. 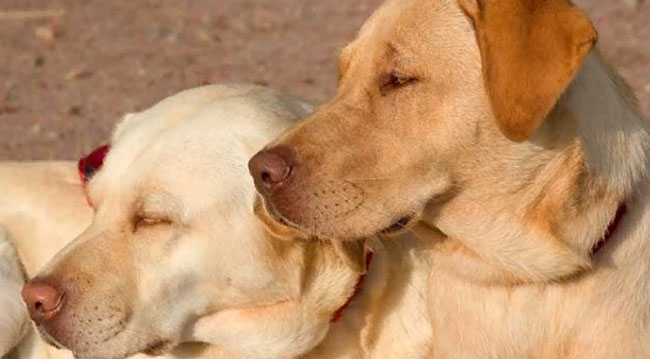 The amount of wool lost varies with conditions. Naturally, a street dog with a thicker cover, lying on the carpet, will leave more hair marks.

An active Labrador does not need the frequent water treatments they are introduced to from an early age. They teach the baby to stand calmly while he is being washed. They speak softly and gently so as not to cause fear and negative reactions.

These skills are important for light-colored fawn dogs capable of receiving significant contamination. But don’t wash your Labradors more than once a quarter.

This is due to the possibility of a loss of natural lubrication when exposed to detergents, which increases the sensitivity of the dog’s skin to the cold. The shampoo is selected specifically, targeted directly for hair care. Optionally, use options for a particular color. They enhance the saturation of the hue.

After returning a wet pet from the street, it is immediately wiped with a cloth that absorbs moisture. When it dries, the remaining dirt is removed with a brush. 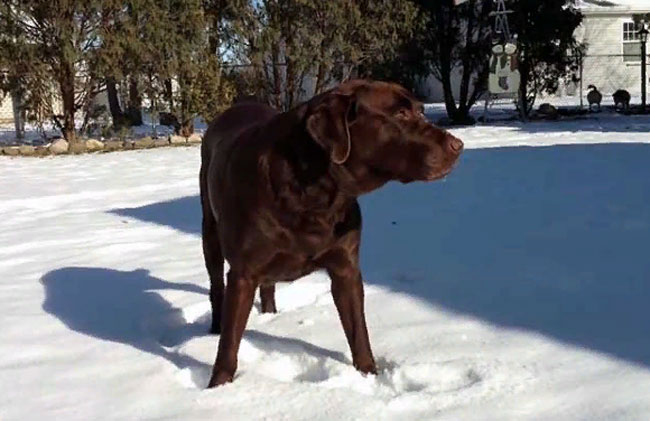