Thorns glofish is an artificial form of the popular aquarium fish thorns (Gymnocorymbus ternetzi), a distinctive feature of which is fluorescence – the ability of cells of living organisms to emit photons of light under certain conditions, in other words, to glow. In 2013, orange and pink thorns appeared, and in 2014, red and blue colors were added to them.

Such an unusual effect was obtained due to the genetic modification of the fish’s DNA by artificially introducing into it the genes of marine coelenterates (corals and jellyfish), among which glow in the dark is widespread. Outside, fish with such genes are painted in very bright and harsh (acidic) colors. If they are illuminated with an ultraviolet light or a lamp with a predominance of the blue spectrum, then the fish literally “flash” like a garland on a New Year tree.

Initially, this technology was developed by scientists to create indicator organisms, which, thanks to their glow, would indicate the presence of pollutants in natural reservoirs or at treatment plants. But its use in decorative aquarium hobby has generated a real boom.

It should be said that there is nothing dangerous in this phenomenon either for human health or for the health of fish. The mechanism can be simplified as follows: under an ordinary daylight lamp, fish cells with the help of special proteins “accumulate” photons of light, and in the UV or blue spectrum they begin to “give up” them, which generates a characteristic glow. 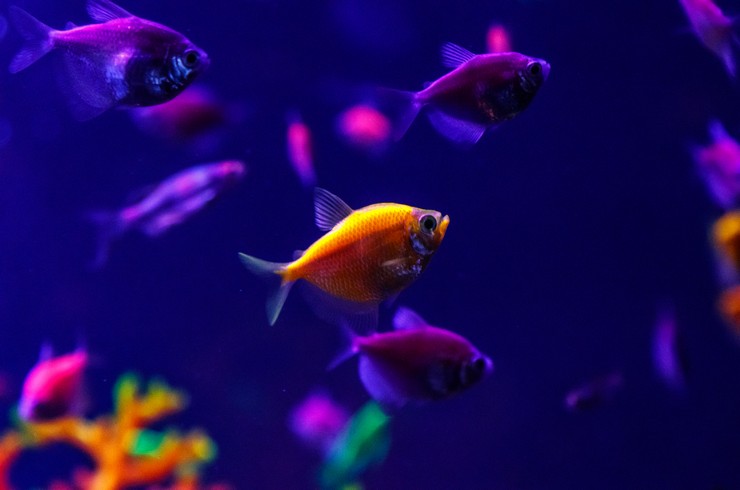 The bright color of the glo thorn has nothing to do with artificial coloring when special dyes are injected under the fish skin. They will not lose their color over time, are not deprived of the ability to reproduce, and, moreover, pass on their bright color to subsequent generations.

Glofish terraces are no different from their natural counterparts in care and maintenance, but due to their unusual ability, they will be an excellent option for creating futuristic aquarium compositions or children’s aquariums.

Glo has a flattened body with a high backline. The head is small with large eyes. Eye color can be either black or match the main body color. When looking at a fish, a well-developed anal fin, stretching from the middle of the abdomen to the caudal peduncle, immediately catches the eye. It can be transparent or half painted in the same color as the body. The dorsal fin is small but high, reminiscent of a sail. The tail is split into two lobes. Between it and the dorsal fin, there is a small adipose fin characteristic of many arachnids. The pectoral and pelvic fins are small and transparent. 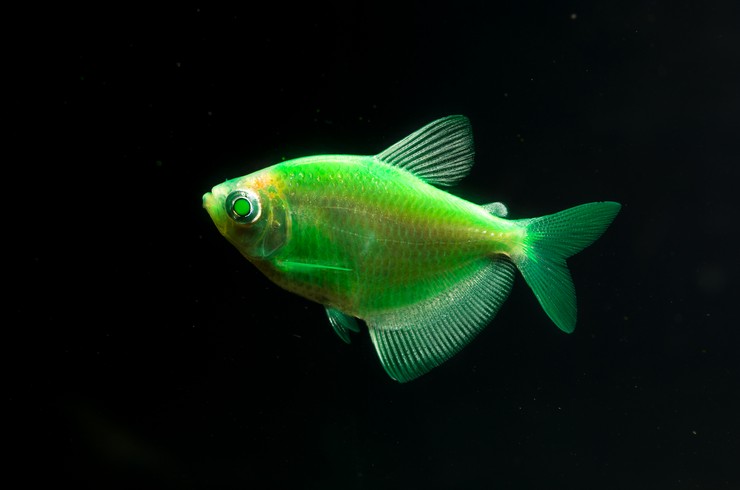 Currently, six variants of the color of the colored thorn are known – blue, light green, purple, pink, red, and yellow. Unlike its natural form, glo thorns lack the characteristic dark transverse stripes on the body.

The size of adult individuals of the glofish thorn does not exceed 5 cm, and the life expectancy in comfortable conditions is 6-7 years.

Glo is an artificial species obtained by genetic manipulation of fish embryos. In nature, such an organism cannot appear.

Nevertheless, from the ancestral forms of thorns, glofish received a love for the soft and acidic water characteristic of the reservoirs of South America, from where the common thorns originate. The gregarious way of life is also the heritage of our ancestors. 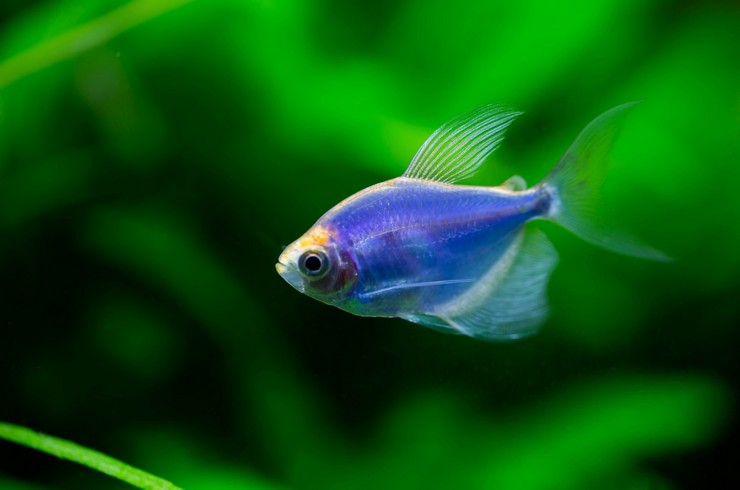 Glo thorns, like their natural counterparts, are distinguished by good endurance, so they will be an excellent choice for beginner aquarists. It is very important to keep the fish in flocks. At least one aquarium should contain 6 pieces, but 8-10 is better. Left alone, the peaceful thorns of glofish can radically change their character and begin a real “hunt” for neighbors who will soon find themselves without fins and in terrible stress.

For a flock of glo thorns, you need an aquarium of 60 liters or more. It must be covered with a lid because these pets often jump out of the water. In terms of the design of compositions with glo fish, there are two main directions:

It is important to create high-quality filtration and aeration in the aquarium. This requires a high-performance filter and a good compressor. A thermoregulator that will maintain a comfortable temperature for fish around 25 ° C will not be superfluous. 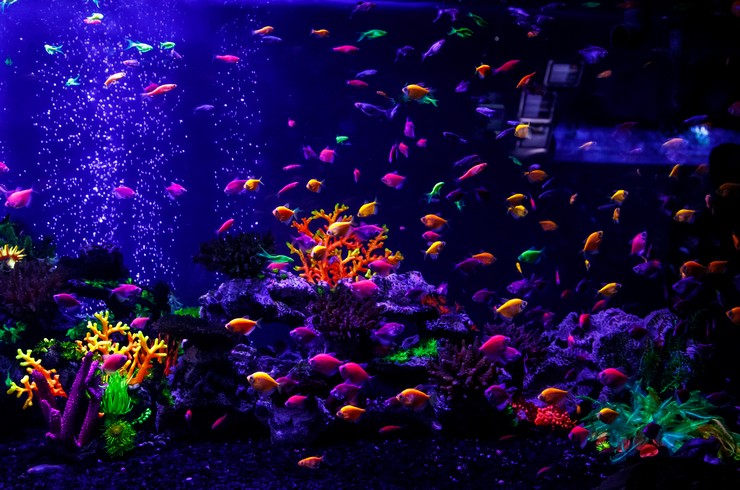 In order for the glofish thorns to “realize” their ability to glow, the aquarium must be equipped with special lighting. An aquarium with lights that have a special night mode (blue) is best suited. They will allow, on the one hand, to observe the life of twilight pets (if they live in a common aquarium with glo thorns), on the other hand, they will give pleasure from contemplating your “living lights”.

Ideally, during the daytime, it is better to keep the fish under the light of blue lamps, then the glow effect will be many times stronger, but white fluorescent lamps will also work.

To prevent the accumulation of hazardous metabolic products in the aquarium water, it must be changed regularly. To do this, once a week, 20% of the water from the aquarium is drained and the same portion of a new one is added. Despite the fact that thorns glofish is an artificial species, various compounds contained in tap water are also dangerous for it (namely, it is most often used for substitutions). For example, chlorine or heavy metals, even in small concentrations, can lead to the death or deterioration of the health of fish. Use Tetra AquaSafe Conditioner to instantly make your tap water liveable for your fish with every change. It will not only eliminate hazardous substances (saving you the inconvenience of settling water) but also add useful vitamins and trace elements to it.

Provided there is a sufficient volume of the aquarium and flocking, the thorns are distinguished by a peaceful and calm character. Unfortunately, violation of these conditions can lead to inappropriate behavior in fish, including aggression towards neighbors.

Among the suitable roommates, it is worth highlighting: mollies, swordtails, gourami, scalar, zebrafish, tetras, Ancistrus, corridors, irises. Do not forget that glo thorns of different colors will also look great with each other. 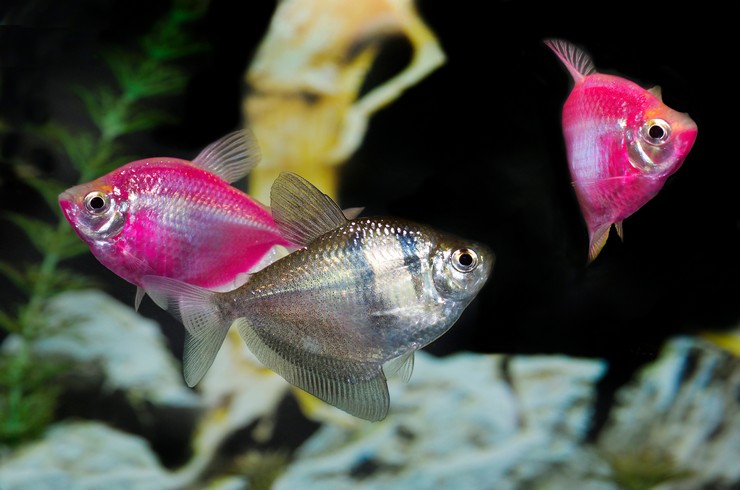 Do not add thorns to slow-swimming species with veil fins, such as cockerels. Such cohabitation does not always end well. And, of course, from the list of possible neighbors, it is necessary to exclude any large and predatory species for which the thorn can become a “snack” – astronauts, cancer, large cichlid.

Adequate nutrition is very important for the health and proper development of your fish. Therefore, it is better to refuse live and frozen food due to their imbalance and the potential for introducing infection into the aquarium. Glofish thorns at home perfectly accept high-quality dry food, which not only contains the entire range of nutrients but also additionally include vitamins and other biologically active substances that support the immunity of fish and give them vitality.

An excellent choice is TetraPRO Color Multi-Crisps or Tetra Rubin Flakes, which will make your pets even brighter with natural carotenoids.

TetraPRO Energy Multi-Crisps or TetraMin Flakes are good alternatives. These versatile feeds, consisting of high-quality ingredients, will fully satisfy the nutritional needs of the glofish thorns. And due to the high digestibility, the amount of fish waste will decrease, therefore, the water will stay clean longer.

Tetra Micro Crisps has been specially developed for fish with small mouths and can also be used for the daily feeding of thorns glo.

Glofish thorns are well-bred at home, you just need to create suitable conditions for this. First of all, you need a couple of manufacturers. Unfortunately, in the case of thorns, the selection is a little difficult because the fish do not have pronounced sexual dimorphism. Females are usually larger and thicker than males, while the latter have a more pointed dorsal fin. The best way to determine gender is by observing the behavior of the fish in the flock. It should be noted that the “acidic” color of glo thorns is inherited by the next generations.

Before spawning, producers should be seated for a week apart and provide them with high-quality and plentiful feeding. At this time, it is worth preparing a special spawning aquarium with a volume of 30-40 liters. Small-leaved plants, for example, Javan moss, are laid at the bottom. This is to ensure that the eggs are not eaten by the parents. 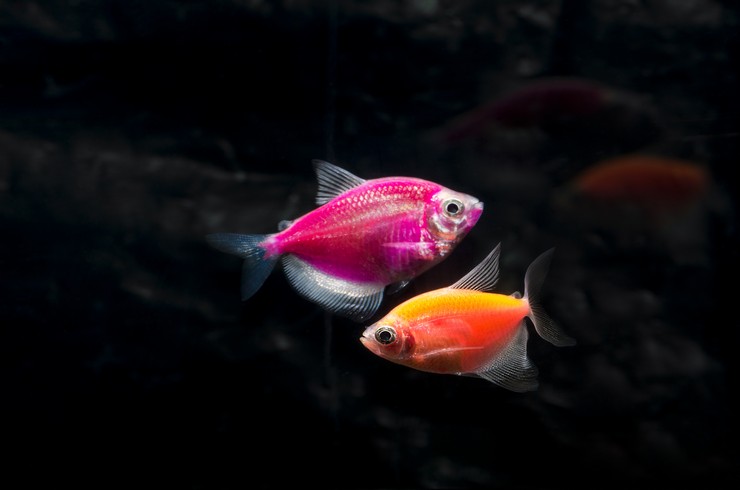 The water parameters in the spawning aquarium should be as follows: T = 24-26 ° C, pH = 7.0, GH about 4. First, the male is placed in the spawning box, and after a few hours, the female is placed. Next, you should shade the aquarium and leave it in this state until morning. Bright artificial lighting the next day will stimulate spawning. Females of glo thorns have good fertility: they can lay several hundred eggs during spawning. After the completion of spawning, the female and male should be removed from the aquarium, otherwise, the eggs will be eaten by the parents themselves.

Within a day, larvae are born, which feed on the contents of the yolk sac for another 3-5 days, after which they switch to self-feeding. As the fry of thorny globes grows, they need to be sorted and seated. Sexual maturity occurs in fish at the age of 6-8 months.