The Tibetan Spaniel is a small companion dog that has nothing to do with hunting Spaniels but was so named by the British only because of the external resemblance to the Continental Toy Spaniels fashionable at the beginning of the twentieth century.

The history of the Tibetan Spaniel is very similar to the history of other dog breeds from the Top of the World. It is impossible to say for certain where they came from in the highlands of China; it is known that for centuries monks have bred four-legged assistants in isolation from the rest of the world. They took great care of their dogs, did not sell or export them. Only occasionally did they donate these dogs as a sign of special gratitude or respect.

In the late 19th century, several small Tibetan Dogs came to Great Britain, where they attracted the attention of dog breeders. For the first time, Tibetan Spaniels were shown at the Kraft exhibition in 1898. In 1934, the English Kennel Club adopted the breed standard, thereby officially recognizing it. In 1961, Tibetan Spaniels were registered by the International Cynological Federation. 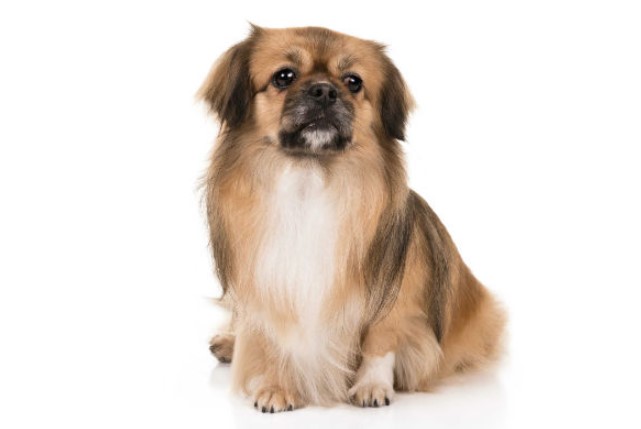 The Tibetan Spaniel is a small, energetic dog of elongated format with a relatively miniature head, without signs of rudeness. The height at the withers is approximately 25 cm, and the weight is 4-7 kg. The outer Tibetan Spaniels are very different from other small Tibetan dogs, the Terrier and Lhasa Apso, but at the same time have an undeniable resemblance to the Pekingese and Shih Tzu, which, apparently, are distant relatives.

The muzzle is of medium length, without wrinkles, with a small chin. The eyes are expressive, clear, set wide apart. The ears are set high, drooping, small. In adult dogs, they are decorated with wool. Typical for the Tibetan Spaniel is a slightly undershot bite, but the tongue and teeth should not be visible. In general, the Tibetan Spaniel should look harmonious. The neck is strong and short. Well sprung ribs. The legs are relatively short. The backbone is strong. Paws are small, neat. The back is of moderate length, straight. The croup is sloping. The tail is set high, curled over the back, very well furred.

The coat is thin, soft, silky. Short on the muzzle and forelegs, moderately long on the body, well attached to the body. The undercoat is thin and dense. The ears, neck, tail, and back of the legs are decorated with feathers, which are especially noticeable in males. Any colors are allowed, the most common golden one. In the homeland of the breed, dark color with a white spot on the chest is appreciated, which, according to Tibetan beliefs, symbolizes a pure heart. A spot on the forehead is a sign of a Buddha, and a white tail speaks of the dog’s thieving tendencies.

First of all, the Tibetan Spaniel is a companion dog, friendly, energetic, and intelligent. He is very attached to the owner and other family members, gets along well with children, especially older ones, who can become partners in games. Stubbornness and independence are present in the nature of the Spaniel, less often dogs are jealous. In general, Tibetan Spaniels are absolutely not conflicting, they get along well with other animals, including cats, rodents, and birds. They are wary of strangers, but if they don’t see a threat from them, they quickly make contact.

Tibetan Spaniels are overly self-confident, have a sense of their own dignity, but even with these qualities, they are not prone to barking, do not provoke conflicts, but, if necessary, can stand up for themselves, showing unprecedented courage. The desire is often achieved by cunning.

Sentinel qualities are moderately developed. The Tibetan Spaniel barks relatively little. Calmly transfers trips and transfers, if the beloved owner is nearby. Loneliness is very hard to bear, needs constant attention and communication. Very sensitive to the mood of a person, does not like screams, noise, and quarrels. Modest and brought up in the house, Spaniel on the street often shows his independence and stubbornness, may not respond to commands if they are not interesting to him, and shows a tendency to vagrancy.

In order for Tibetan Spaniel to always look neat and presentable, you will have to devote a lot of time to grooming your coat. The dog is regularly combed, after walking in the grass, it is advisable to immediately remove the burdock, grass seeds, twigs from the wool in order to prevent the formation of tangles. The dog is bathed every 7-10 days. Professional hypoallergenic cosmetics for the care of dogs with soft long hair are best suited. After bathing, anti-tangle conditioners and balms are often used. It is also important to keep your dog’s eyes, ears, and teeth clean. In puppies, increased tearing is sometimes noted, which disappears with age. If the dog walks a little on hard ground, it is necessary to trim the claws every 3-4 weeks.

Most Tibetan Spaniel owners and breeders prefer to feed their dog’s good dry food, which is selected according to the age, size of the dog, and physiological condition (lactation, pregnancy). However, there are also adherents of natural nutrition. In this case, the diet for the dog is prepared according to standard rules, usually with the help of a veterinarian. When choosing food, it is worth considering that Tibetan Spaniels are often allergic.

Tibetan Spaniels belong to long-lived dogs, they often live up to 16-18 years, and sometimes even more. On average, life expectancy is 14-15 years. In general, dogs are in good health, but they are not devoid of hereditary diseases:

Tibetan Spaniels require standard veterinary preventive measures. In addition, it is advisable to undergo an annual medical examination with the dog, which will allow identifying the disease in time.