The Tibetan Terrier attracts lovers of long-haired dogs all over the world with its friendly balanced disposition, sensitivity, and outstanding intelligence. The dog is practically not a hassle in everyday life, but it requires regular grooming. 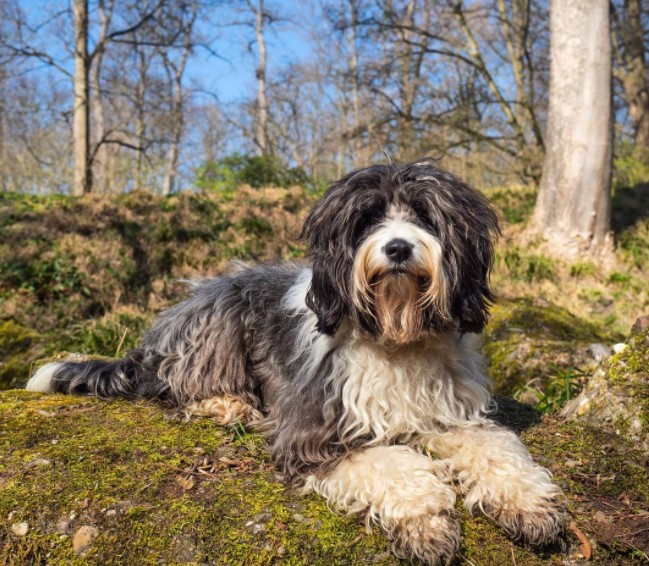 Tibetan Terriers have nothing to do with terriers. The breed received this name for its external resemblance to small rodent exterminators, which were and remain popular in Great Britain. It is known that dogs of this type have been bred for centuries on the territory of the Tibetan Highlands, however, how these little helpers were used is not known for certain. It is believed that they were versatile – they could work as shepherds or guard dogs, alerting larger guards of impending danger.

A new era in the history of the breed begins in the 20s of the XX century when the English doctor Agness Gray received a pair of Tibetan Terriers as a gift from an Indian princess and brought them to the UK. She became the first person from Europe to receive puppies of this breed, valuable for Tibetans. Her dogs laid the foundation for the English Tibetan Terrier dynasty. Further breeding work took place in the UK. In 1957, the breed was recognized by the English Kennel Club. 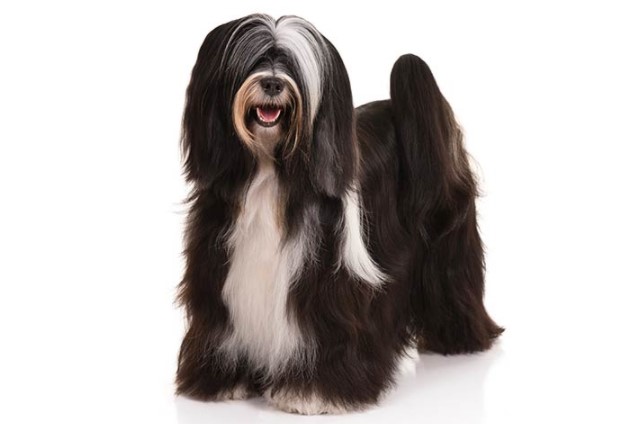 Skull of medium length, tapering slightly from ears to eyes. The stop is marked moderately. The muzzle is very long, from eyes to tip of tail equal to length from eyes to occipital protuberance. The nose is black. The lower jaw is well developed. Scissor or reverse scissors bite. The jaw arch is curved. The eyes are round, large, set rather wide, dark in color, should not be protruding. The eyelids are black. The ears are not too close to the head, set high on the sides, drooping.

The medium neck allows the head to be carried above the level of the back. The body is compact, strong, well-muscled. The top line is horizontal. The loin is slightly arched and short. The croup is horizontal. The tail is set high and carried curved over the back; creases are allowed at the tip. The chest is lowered to the elbow. Ribs well laid back and well sprung. Legs straight and parallel. Feet are large, round, firmly on the pads, not arched.

The coat is double, formed by an abundant fine topcoat, which should be straight or wavy, but not curled, and a fluffy thin undercoat. Virtually any color is allowed, but chocolate and liver are considered a serious fault, although it does not lead to disqualification. The most common colors are red, white, cream, gold, smoky, black, tricolor, and bicolor.

The Tibetan Terrier is an alert, friendly, intelligent, playful dog that is very loyal to the owner and the rest of the family, non-conflict and non-aggressive. With strangers, these dogs behave moderately friendly.

In most cases, Tibetan Terriers get along well with other animals in the house, large and small. However, if a new neighbor appears with an adult dog, they can show jealousy and provoke conflicts. The formation of character is strongly influenced by the temperament of the owner, the conditions in which the dog grew and developed.

Tibetan Terriers are great for keeping in a family with children, especially with older toddlers, who can become a companion for the dog in games but will not bother them with excessive attention. Communication with very young children must be controlled – Tibetans will endure a lot, but if they are hurt, they can snap back. They can also simply knock the baby down by jumping during the game. Tibetan Terriers, especially males, tend to show their leadership inclinations not only over humans but also over other animals in the house, especially at the transitional age from 1 to 2 years. Often, this behavior is facilitated by the owners themselves, who unnecessarily pamper the dog. 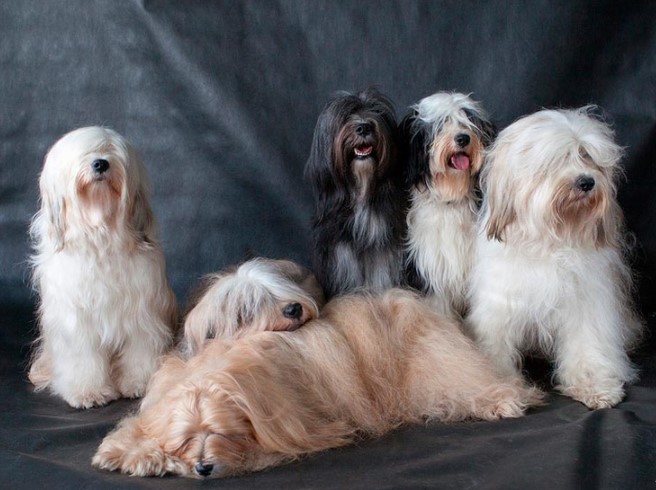 Caring for Tibetan Terriers is quite troublesome and expensive. First of all, a long, beautiful coat needs care, which is combed daily or at least two to three times a week. They wash the dogs once a week and dry the coat well with a hairdryer. After washing, it is important to disassemble the wool and comb it well. Cosmetics are selected individually, after washing, antistatic agents and anti-tangle agents are used. In the cold season, wool needs additional protection with oils or a greasy conditioner. Especially frequent combing is required for dogs at the age of 10-14 months when the puppy fluff changes to an adult coat.

Owners who do not display their Tibetans usually decide in favor of a haircut. The dog is cut with the onset of warmth under a clipper with a nozzle up to 6 mm, often leaving a long tail and ears. 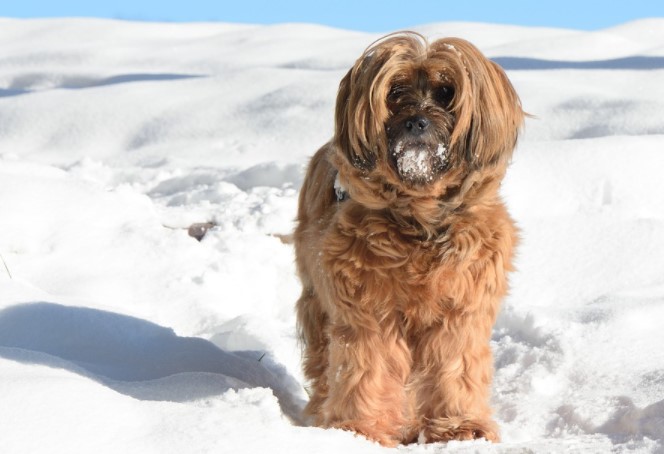 Like any other dog, Tibetan Terriers are susceptible to various infectious diseases, some of which can be avoided with annual comprehensive vaccinations. It is also necessary to regularly treat the dog for external and internal parasites. In general, the Tibetan Terrier is considered a healthy breed. The normal lifespan of these dogs is approximately 14-16 years. Tibetans are cold-resistant, tolerate hot and frosty weather well. Like any breed, they have their own characteristic hereditary diseases, but compared to other dogs of similar size, the number and frequency of registration are low.

Most of the breed-specific diseases concern the organs of vision. They are hereditary in nature and, contrary to popular belief, the length and thickness of the bangs do not in any way affect the development of ophthalmic pathologies, especially when it comes to the wool of natural length. In rare cases, trimmed bangs grow back and injure the cornea, causing inflammation. With timely treatment, the problem is quickly eliminated.