Lake Tanganyika, which is part of the African Great Lakes group along with Lake Malawi, became the ancestor of a large number of fish species. Tanganyika cichlids are some of the most beautiful fish in the aquarium hobby. Despite the fact that many of them require a careful approach to care and maintenance, the popularity of these groups is only growing. In our article, we will tell you about trophies – famous inhabitants of this African lake.

Trophies (Tropheus sp.) Are a genus of freshwater ray-finned fish from the Tsikhlov family. It currently includes only 6 species and a huge number of color morphs, which are usually named after the nearest settlement where the first specimens were caught.

All species are endemic to Lake Tanganyika, located in East Africa. Fish have no commercial value among the local population.

Trophies are characterized by caring for the offspring – all females carry eggs in their mouths. They are “vegetarians” – the basis of the diet is algal fouling, which the fish scrape off the rocks.

They require a certain amount of experience due to the special conditions required for keeping, and innate aggressiveness. Well suited for living in large species aquariums.

It is important to take into account that close species of trophies can easily interbreed with each other, therefore it is better to settle representatives of only one species in one aquarium.

The basic rule of keeping trophies: no experiments with water and food. The stability of conditions and feeding is very important for them! 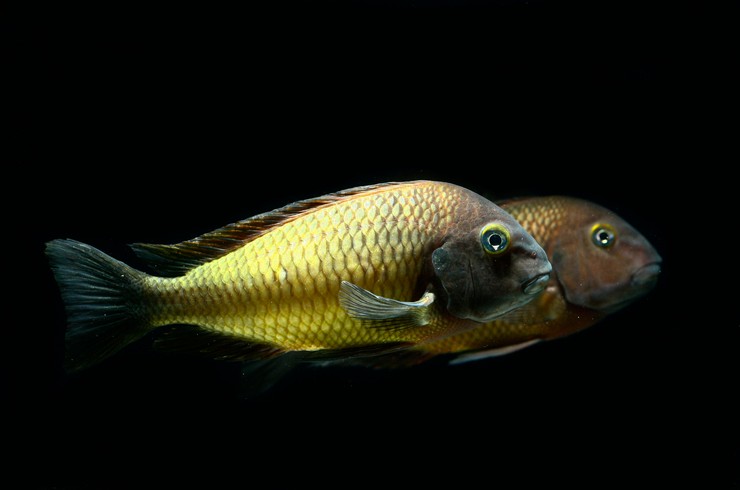 Trophies have a moderately elongated body that tapers towards the back and a sloping forehead. The head is large with large eyes. The dorsal fin is low but extends over the entire back. The tail is not split.

The color of the trophies is extremely varied. A large number of color morphs are distinguished depending on the region of habitat. For some species (for example, the stellate tropheus), a cardinal color change is observed with age. Wide colored stripes on the body are characteristic. The size of adults varies from 8 to 16 cm.

The homeland of trophies in nature is Lake Tanganyika. Fish are widespread throughout the lake. The habitat is very similar to that of the Malawian cichlids of the Mbuna group. They prefer shallow waters (3-5 meters) along the coastal strip of the lake. The rocks here are well lit by the sun, which stimulates the growth of algae – the main food in the diet of trophies. And crevices in rocks serve as a good refuge. Only the stellate tropheus lives at depths of about 15-20 meters. 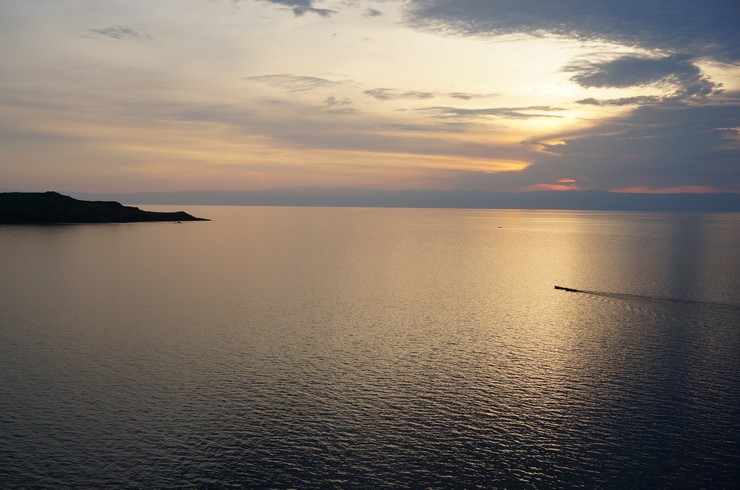 For a comfortable life, trophies require spacious aquariums with a volume of 200 liters and a length of at least 120 cm. Although capacities from 300 to 1000 liters are ideal. The aquarium must be equipped with a cover. A plain blue film or interior background that imitates rocks works well for backgrounds.

Coarse sand or small pebbles with a diameter of 1-2 mm are used as soil. Trophies look good among the piles of stones, from which many caves and shelters are formed. But don’t forget to leave a place for swimming. Among the plants that can be planted in an aquarium with trophies, one can distinguish Thai fern, anubias, echinodorus, cryptocorynes, Bolbitis fern, nymphaea. 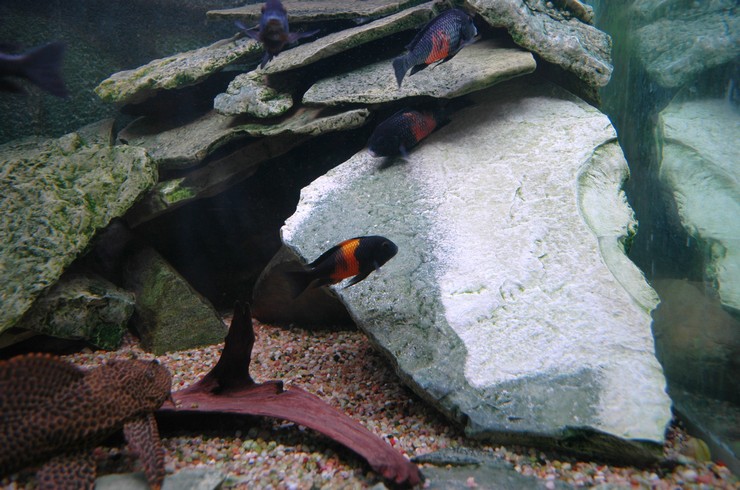 Trophies place high demands on water quality. The aquarium must be equipped with a powerful external filter and changed weekly up to 20% of its volume. Since the water in Lake Tanganyika is saturated with oxygen, a compressor is required. And to maintain a comfortable temperature, you need a thermostat. Trophies prefer bright lighting, lasting 12-14 hours.

Representatives of the genus Tropheus are aggressive. It is aimed primarily at representatives of its own species, interspecific clashes rarely occur. In aquariums, trophies form closed groups. This means that it is impossible to add a new individual to an already formed group – it will be destroyed by relatives. The fishes from the group know each other well and easily distinguish “strangers”. There is a rigid hierarchy in the pack.

In small communities, aggression is quite strong, so it is recommended to keep 10-15 individuals at the same time in order to neutralize it.

You can keep trophies with commensurate Tanganyika cichlids: Julidochromis, Eretmodus, Tanganykodus, Fronts. Perfect for the joint maintenance of synodontis catfish. 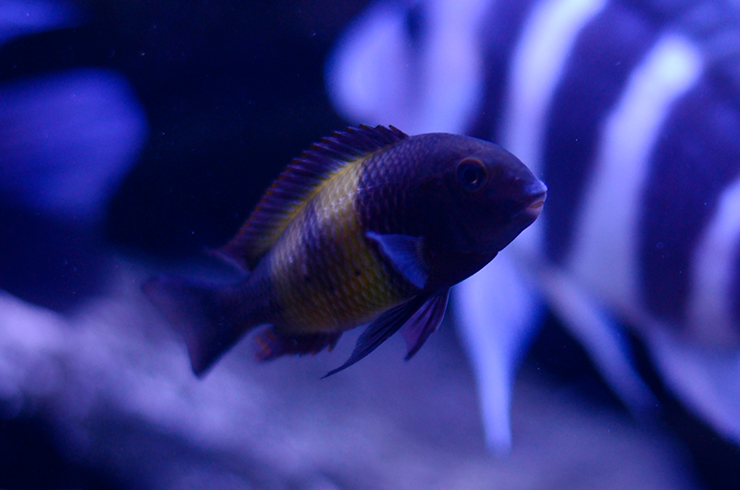 The natural diet of trophies is represented mainly by plant food – a variety of algal fouling. Therefore, at home, fish must be fed mainly with feed with a high proportion of plant components. The digestive tract of trophies is very long and is adapted for digesting dense membranes of plant cells. Long-term feeding with protein feed leads to stagnation in the intestine and its deformations. Therefore, it is recommended to exclude live and frozen food from the diet. It is better to give preference to quality and balanced dry food with a high content of algae.

An interesting fact: the dissection of the fish showed that they have grains of sand in the intestines, which the trophies swallow when sifting through the gills. Scientists believe that sand is also involved in the digestion of these fish.

Sexual maturity in trophies occurs rather late for ornamental fish – at the age of about 2 years.

Sex differences are weak, so the guaranteed method for determining sex in the shape of the genital tubercles: in the male, they are pointed, and in the female they are round.

Breeding is possible without settling in a separate container since fish tend to take care of the offspring. Trophies usually spawn over stones. After spawning, the female collects the eggs in her mouth and nestles on the male, who fertilizes her.

The number of eggs in trophies is very small, only 5-20 pieces. This is due to the fact that the female’s throat sac is of limited size. The incubation of eggs lasts about 4 weeks, after which large, formed fry are born. Unlike Malawian cichlids, female trophies feed while eggs are developing. Therefore, you must be careful, a frightened female may accidentally eat the offspring.

At first, the fry, at the first signs of danger, climbs into the female’s oral cavity until they become sufficiently independent.