Siberian Husky is a well-known and popular dog breed. However, if almost everyone can describe how they look, then almost no one can remember how these dogs bark. But almost everyone knows that huskies love to howl loudly and shrilly. What, don’t Siberian huskies bark? Quite quite? Let’s understand this issue together.

Contents hide
1 Can Huskies Bark?
2 Why are They Howling? 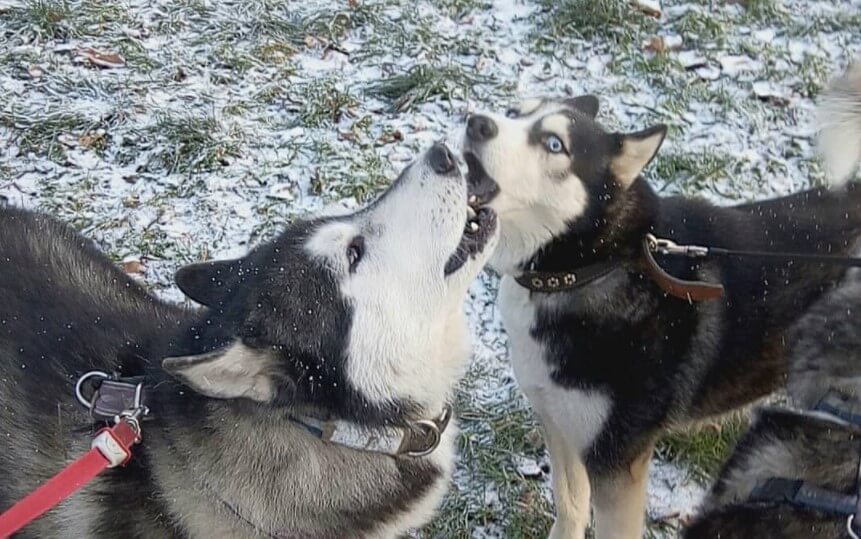 There is a very beautiful legend among the indigenous peoples of the snow-covered Far East. According to her, a puppy of this breed was sent to earth by higher powers in order to tell people about eternal life after death. However, the dog could not cope with the task assigned to it, for which it paid. The gods punished her with the fact that instead of the usual barking, she could only howl. How are things really?

Like all other husky dogs, they can bark. The structure of their respiratory apparatus and larynx is no different from the organs of St. Bernard or, for example, Chihuahua. Just giving voice is not one of their habits. All huskies are very silent and they will begin to bark only if they experience strong emotions, such as anger or joy.

Why are They Howling?

Their love for loud howling can be explained by the fact that wolf genes are present in the blood. It is also worth remembering what these dogs did in their homeland. We are talking about the transportation of heavy sleighs with people and goods. For this, the dogs were harnessed to teams, running in which took a lot of energy. Therefore, howling among huskies is considered the most energy-consuming way of communicating with their own kind and people than barking.

Important! Teaching your pet to voice is not that difficult. The principle of teaching this skill is the same as for all other commands.

Another thing is to wean the husky to howl loudly. With this behavior, the dog can attract attention to itself, show that it is scared. If the owner noticed that the pet began to howl too often, it must first be shown to the veterinarian. If no health problems are found, you can start educational measures. So, the pet can be shown to the dog handler, who will help to correct the behavior. He will tell you what to do so that the husky does not howl out of boredom or out of fear of being alone at home.

The owner, in turn, is required to give the pet as much time and attention as possible. Perhaps the dog simply lacks communication and howls it is trying to achieve it.