One day a Briton named Ken Wilman was walking along the beach near the town of Morecambe. Suddenly, he noticed a golden-brown stone lying on the sand, which exuded an unpleasant odor. In appearance, this “fragrant” boulder could in no way resemble a treasure.
The 48-year-old unemployed person did not take the boulder for himself, deciding first to find out what it is, whether it can be touched and moved.

Once at home, the Briton turned to the Internet for help. It turned out that on a deserted beach lay ambergris – a solid, wax-like substance that forms in the intestines of sperm whales. This unpleasant-looking, smelly substance is highly prized because it is not so easy to obtain, and it is always in demand by perfumers.

This expensive substance is formed in the digestive tract of sperm whales, and at a certain point, it is excreted from the body in the form of large stones of a brown, white, and gray color. White is valued most of all.
It is the constant demand and the large sums that perfumers are ready to pay for ambergris that drives whale excrement hunters to comb the beaches and coastal waters of Brazil, Great Britain, China, India, and Africa.
The unemployed later said that he rushed to the place of the find with all his might, fearing that someone else, more agile and knowledgeable, had already appropriated the precious find. But Wilman was lucky. The beach was completely empty. No one cared about the stinking treasure. The Briton took the ambergris home, trying to ignore its strong smell. He was already looking forward to snatching a big jackpot for her. 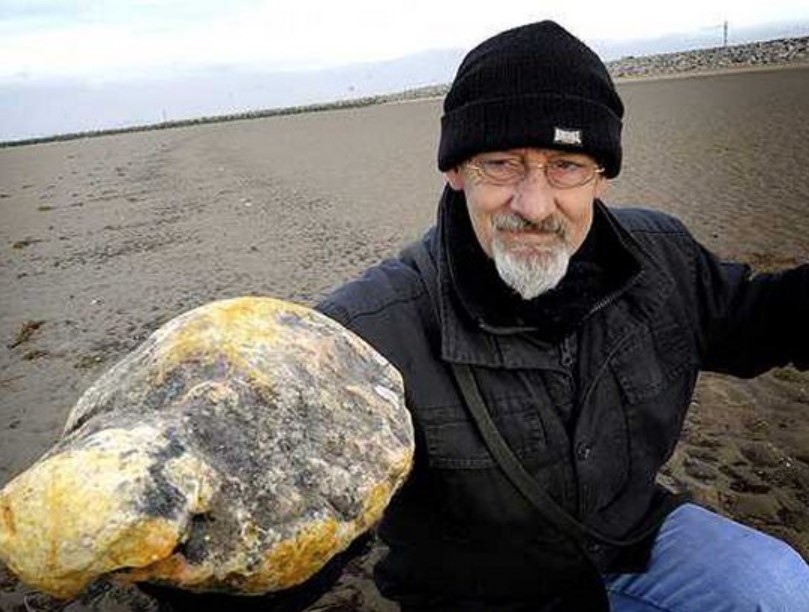 Later, Wilman consulted with experts and learned that the cost of his find could go up to 115 thousand pounds (182 thousand dollars), so he refused the first buyer who offered 50 thousand pounds (79 thousand dollars) for it. It is not known for certain whether the Briton was able to bail out the required amount for ambergris. Most likely he could.
A similar story happened a year ago with 8-year-old Englishman Charlie Naismith. The boy was walking along the beach and found a golden stone. He brought it home, where the parents did not throw the find into the trash but were able to identify it.
Experts have studied the composition of the find and confirmed that it is precisely ambergris. Then one of the perfume companies bought it from the Naismith family for 40 thousand pounds (53 thousand dollars).

This is how sperm whales, unwittingly, help residents of coastal areas to improve their financial condition with their waste.