The number of pet lovers is growing every year all over the world. Various games with dogs are gaining more and more popularity, and the games themselves are also becoming more and more. Dutchman Arie Konings came up with another game.

It was born out of the amalgamation of dog-frisbee sports (a competition between dogs to catch a thrown disc) and a completely human game of darts (throwing darts or arrows at a suspended target). The human’s task is to accurately throw the disc at the target, the pet’s task is to catch the disc in the circle of the target where the maximum number of points is awarded. 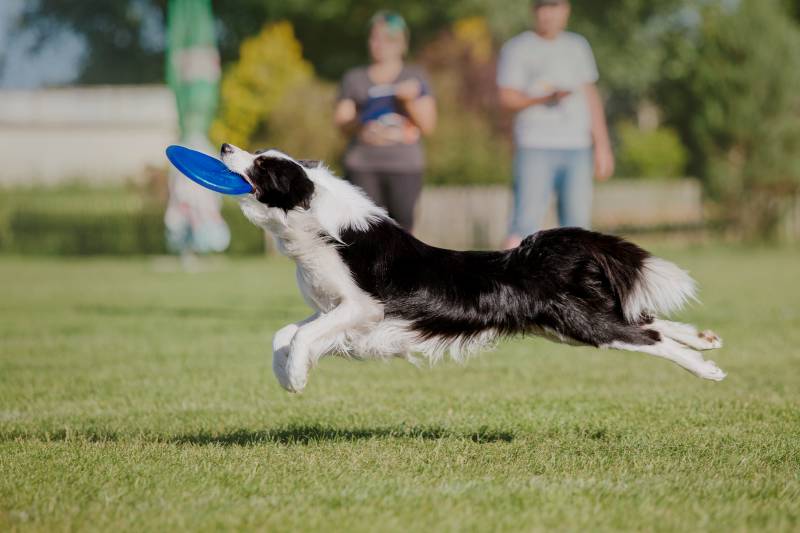 Dog dartbee quickly became popular with dog lovers, as it allows you to play as a team or together with a pet and does not require expensive and complex equipment.

On a suitable level area, markings are made:

A guide to teaching a dog to play dog ​​dartbee includes six points: “Introducing the disc”; Hunting Instinct; Loot rental; Jumping for Prey; “Throws”; “Throws with a detour”. You can find a detailed scheme for training a dog on the Internet.

The person throwing the circle must be 15 m from the edge of the largest circle and 18–25 m from the center. Much depends on his skill, faithful eye, and a firm hand. If the disc flies out of the markup, points will not be awarded, even if the dog has time to catch the disc.

How Do I Calculate the Points?

The main thing is to carefully monitor where the dog’s front paws are after it has caught the thrown disc.

If they fall into different zones, then the final points are awarded at a lower standard. However, if at least one paw of the animal falls into the central zone (despite the fact that the disc is successfully caught by the dog), then 100 points are immediately awarded.

In the event that teams are playing, it is proposed to make 5 throws each and calculate the total amount. If the number of points scored is the same, then the opponents are invited to make another throw. Whoever gets the best result is the winner. If necessary, the throw can be repeated again until different results are achieved.

You can train a dog to participate in the game at any site convenient for the owner, except for the previously marked field for dog-dartbee competitions.

Pets are not allowed to wear strict collars and choke collars during performances. And, of course, they do not allow sick and aggressive animals and current bitches to participate in the game.