The homeland of this sport for dogs is Germany, where it originated at the beginning as a kind of useful and pleasant pastime.

The owners of herding dogs were worried that their four-legged wards were beginning to lose their grip, as they practically ceased to have direct contact with real sheep. Therefore, a way out of the situation was the created system of exercises, which allowed the pets to maintain their shepherd instincts at the proper level. 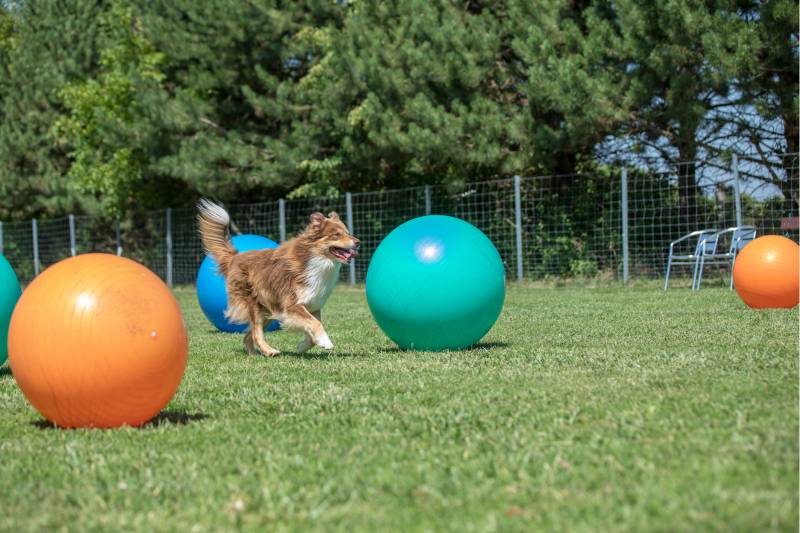 The first treibball competitions were held in 2007. Today it is played not only in Germany but also in various European countries, including Russia, as well as in the United States.

According to the rules of treibball, the four-legged shepherd “grazes” not sheep, but large inflatable balls – eight pieces, obeying the commands of the owner. His main and only task is to drive them into the gate. The owner is allowed to stand near the corral and give commands by voice: “Left!”, “Right!”, “Forward!”, “Back!” He can also use gestures, a whistle, all other manipulations are prohibited and fined.

The easiest version of the game is when the balls are located on the starting line in the form of a triangle. The “athlete” must drive these balls into the “corral” goal. The dog can push the sports equipment into the gate with its paws, muzzle – whatever, but it is important not to pierce the sports equipment.

The difficult option involves rolling the balls according to the established order: for example, blue-yellow-orange.

It should be noted that treibball in terms of sports achievements is somewhat similar to the Olympic Games, the main thing here is not victory, but participation, a pleasant, interesting, and rewarding pastime of the dog and the owner. After all, almost any dog, regardless of breed, can roll the ball across the clearing for pleasure. And the dominance in the competition is not the sports component, but the contact and mutual understanding between the owners and the dogs.

In this sport, there is no age limit for dogs or their owners. And this does not require much physical effort.

You do not need a lot of space for classes, as well as expensive equipment. You can train with one or using balls.

The first thing to do is teach your dog to be comfortable with the balls. It must lie down on command and remain in this position, even if the ball rolls past. But he cannot be directed directly at the ward, otherwise, he may be frightened.

Training is best done with clicker training. Click the clicker to encourage the correct actions of the dog. The ball must be only an object that the “athlete” must deliver from point A to point B, while he must not play with the ball, but must “grab” it – push and roll.

Next, you should teach the dog to adjust the balls to the owner, but only on command, otherwise, it will run away with sports equipment, thinking that this is a game. It is necessary to achieve strict and exact obedience, without the dog’s independence. When this is achieved, you can put the gate so that it drives the balls into them. After that, all that remains is to increase the speed and accuracy of hitting the gate.