When choosing a sport that’s right for your dog, take a closer look at your pet. Some animals will successfully and with pleasure pass agility obstacles, others will become freestyle stars, and still, others can prove themselves in weight-pulling. But there is also an exceptional sport – lure coursing. Not all dogs are capable of participating in field trials. Why?

Lure coursing is originally from the UK. It appeared in the 16th century when hunting with greyhounds was a popular pastime of the nobility. Before the hunt, the dogs were warmed up by setting them on a live hare. Since the 18th century, the number of wild animals began to decline, and a number of restrictions were imposed on hunting. Then lure coursing came to the rescue. It helped to maintain the physical condition of the hound dogs and their working qualities.

Contents hide
1 Lure Coursing Today
2 How is the Competition Going?
3 How to Prepare for a Competition? 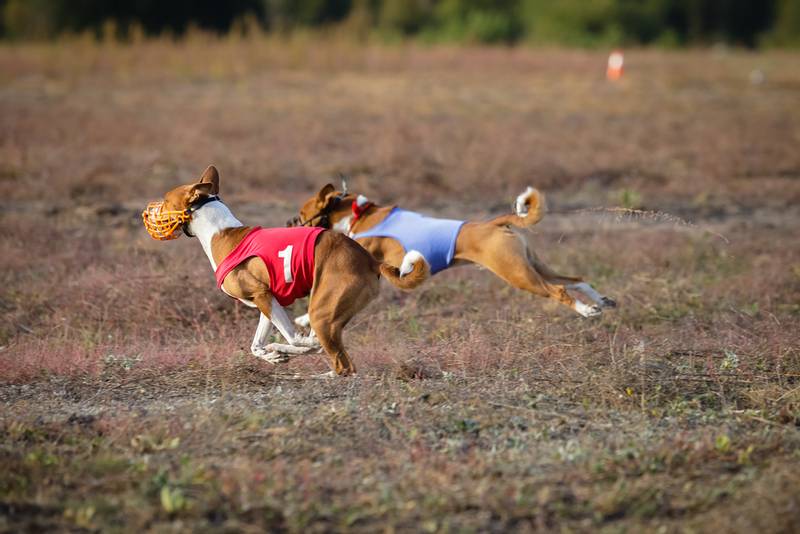 Today, lure coursing for dogs is not a real hunt for a live hare, but an imitation of the process using a special device called a mechanical hare. It is a reel with a motor – a bait is attached to the device. Animal skin, plastic bags, or washcloths are used as bait.

Coursing competitions are held on the field. The track is usually uneven, with unexpected bends and sharp turns. By the way, this sport is often confused with racing – running for bait in a circle. The main differences between them are the track and the evaluation criteria.

Lure coursing criteria are considered to be quite subjective. For each of them, the judges give a score on a 20-point scale.

Criteria for Evaluating a Dog:

Speed. Since finishing first in coursing is not the main thing, the speed of the participants is assessed by other parameters – in particular, by the dog’s running style, its ability to give all the best on the track. So, there is an expression “an animal creeps on the ground” – this is a special greyhound gallop, that is, a low and sweeping run. The speed with which animals rush in the final throw for prey is also appreciated;

Maneuverability is one of the main distinguishing criteria for judging coursing. It evaluates how quickly and easily the dog is able to change the trajectory of running, its manner of passing sharp turns;

Intelligence is assessed by what strategy the dog will choose in pursuit of the bait: whether it will try to shorten the path, cut corners, analyze the movement of a mechanical hare, cutting off its escape routes. In short, this is an indicator of how effectively she chases her prey;

Endurance. This criterion is assessed by the form in which the dog came to the finish line;

Enthusiasm is the dog’s desire to catch prey, ignoring failure.

During the competition, participants make two races. Dogs with less than 50% points in the first race are not allowed to enter the second round. The winner is determined by the sum of the points scored from the results of the two races.

Traditionally, coursing is a competition for hunting dogs. The best in this sport are the Whippet, Italian Greyhound, Basenji, Xoloitzcuintle, Peruvian Hairless Dog, and some others.

However, other pets can also participate in the race, including those without a breed, but in this case, the title will not be assigned. The minimum age for coursing participants is 9 months, the maximum age is 10 years.

Dogs in heat, as well as lactating dogs and with obvious signs of pregnancy are not allowed to compete.

How to Prepare for a Competition?

Coursing is a great opportunity for a dog to release energy, keep fit and work. But you should start training very carefully. If you have little experience, it is better to contact a professional dog handler who will help you prepare for the first competition.

It should be borne in mind that lure coursing training starts quite late – after 8 months. Early physical activity can lead to health problems for the dog, especially when it comes to improper exercise.

Coursing is one of the laziest sports for a dog owner. Unlike, for example, canicross, running with a pet is not necessary here.