Skijoring is a fairly young, but already quite popular sport. Its main advantages are its affordability and fun. A person is required to be able to stand well on skis, and from a dog, a desire to run and pull a load. What other features does this sport have?

Dog skijoring is believed to have originated in Norway. It all started with simple individual training for the team leaders. The dog had to pull the trainer who was skiing. Gradually, classes became more and more popular and soon developed into independent sport. The first skijoring competition took place in 1930.

The idea of skijoring was quickly appreciated by the Americans. It was they who popularized this sport. In 2011, the largest competition took place near Minneapolis, in which more than 200 teams took part.

Contents hide
1 Sports Features
2 How Do I Get Involved?
3 Training 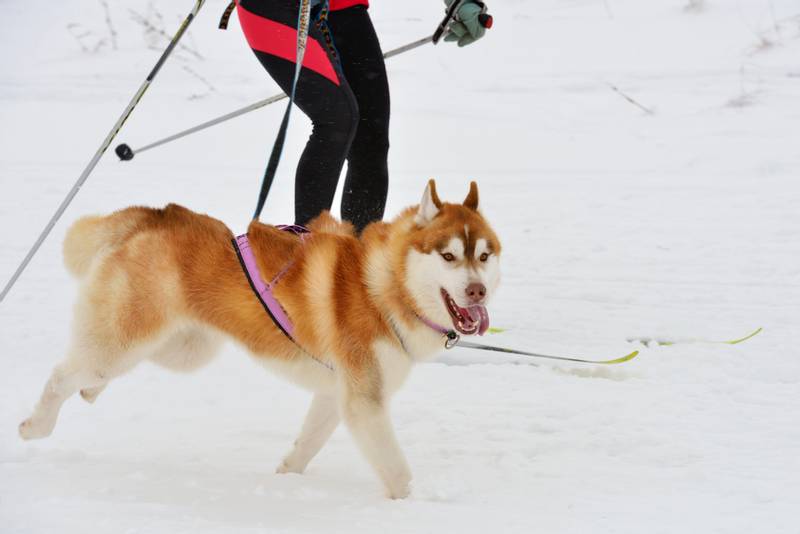 According to the skijoring rules, one athlete can be pulled by one to three dogs in a team. The length of the route is usually from 5 to 20 km, but there are also much longer distances. For example, the Canadian track is considered a record, its length is 160 km.

The competitions are supervised by international organizations. In the USA and Canada, it is the International Dog Racing Federation.

How Do I Get Involved?

Getting started in skijoring is not that difficult. This sport does not require a large amount of equipment, the main thing is desire, including dogs.

Skijoring can be done by animals that are able to stretch a person. As a rule, these are large pets weighing more than 16 kg.

The best candidates for this sport are northern breeds (huskies, malamutes, huskies), as well as retrievers, labradors, and even mastiffs. However, the breed does not play a special role. Often, dogs without a breed become outstanding athletes.

Belt. Athletes use a wide belt worn at the waist. Climbing seat belts are also suitable;

This is the cord that connects the skier and the dog. Its length is approximately 1.5–2 m, it absorbs sudden movements;

Harness. For sledding sports, each dog needs to buy a special sports harness. It is particularly durable and lightweight;

Skis. Cross-country skis are great for skijoring. For better sliding, they are lubricated with wax. However, if you want to practice on different sites (in the city, in the forest, or on the trail), you should purchase the appropriate pair of skis for each of them.

For skijoring, you should choose a dog trainer, because pet training is one of the main components of success. First of all, it must know the commands “Stop”, “Forward”, “Left”, and “Right”, and also obey the owner without special signs.

The physical activity begins at about the age of one year, but much depends on the breed of the dog. It is very important that the pet is disposed to this sport – it is happy to pull the athlete and carry out all his commands.

Skijoring on dogs is a team sport, in which a lot also depends on the person. The owner must ski well, be able to maneuver, and slow down at the right moment – in a word, be a worthy companion to the pet. In addition, there must be complete mutual understanding and trust between the skier and the dog.