Dog sports have their own disciplines: athletics, cross-country skiing, and even weightlifting. The latter includes weight pulling. He is very popular in the USA and Canada and is gradually gaining fans in Russia. What is weight pulling for dogs and can your pet do it?

It is believed that vape pulling originated at the end of the 19th century, and the first mentions of it can be found in the novel Call of the Wild by Jack London, as well as in other literary works of the late 19th – early 20th centuries. It was the period of the gold rush and the need to survive in harsh natural conditions that prompted the development of sledding with dogs and, accordingly, weight pulling – pulling the load.

As an independent sports discipline, weight-pulling for dogs began to develop only in the second half of the 20th century. So, in 1984, the first International Weight Pull Association was founded, which still operates in the United States. A little later, similar European organizations appeared.

Contents hide
1 How is the Competition Going?
2 Who Can Participate?
3 How to Prepare for a Competition? 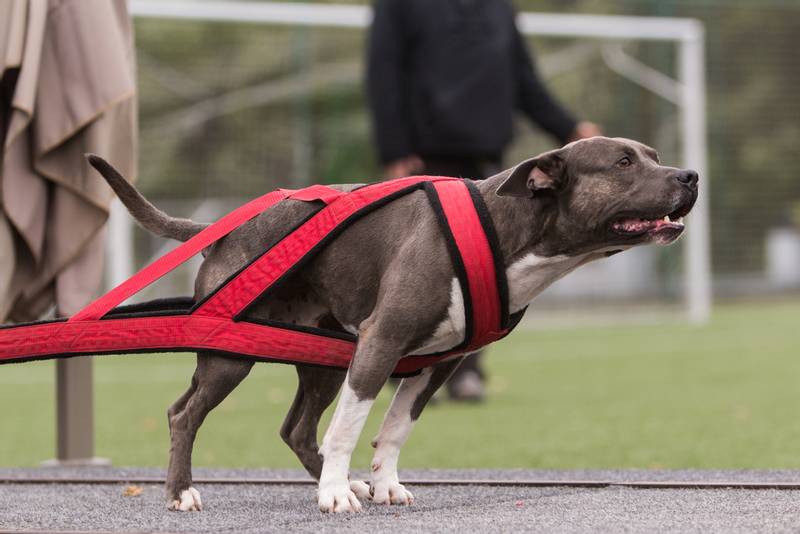 Each organization has its own rules for holding weight pulling championships, which may differ slightly from each other.

Each dog is weighed immediately before the competition, and according to the results, it is assigned to one of six categories.

The task of each dog participating in the competition is to move the platform on which the load is located within a minute, at a distance of 5 meters;

In this case, the handler should not touch the dog or the load until the animal crosses the finish line;

The weight of the load for each athlete is calculated based on the weight category to which the dog belongs. The lightest load weighs 100 kg and is used in the category of dogs weighing up to 10 kg; the heaviest load – 400 kg, it is carried by participants weighing more than 50 kg;

Judges can recommend a lower weight for each individual competitor;

The amount by which the weight of the load is adjusted at the next attempt is determined by the judges, taking into account the opinion of the majority of handlers;

Rude attitude towards the dog by the handler, false start, animal aggression, and provocation of other participants are punished with penalty points or disqualification;

A whistle or treats should not be used to attract a dog;

The winner in the competition is the participant who managed to pull the largest weight in his category.

Animals from 1 to 12 years old can take part in weight-pulling competitions, all of them must be healthy and vaccinated. Puppies under 12 months of age, pregnant women, and dogs in heat are not allowed.

The breed and size do not matter, the main thing is the animal’s desire to pull weight, its perseverance, and power capabilities.

How to Prepare for a Competition?

Despite the fact that only adult dogs can participate in the competition, preparation for them should be started in advance – from about 4–5 months. If there is little experience, it is advisable to trust a specialist cynologist.

First, the dog is trained in a general training course. The pet is taught obedience and basic commands. When the animal’s musculoskeletal system is finally formed, training begins with the use of a load and is accustomed to a harness. It is very important to gradually increase the weight on the platform.

You can train not only in summer but also in winter, using sleds and even skis, as in ski pulling.