Uterine inflammation is a serious condition that is common in non-neutered bitches. Because the symptoms are not always clear, the inflammation can be dragged on. Sometimes that ends fatally for the female.

Contents hide
1 The Essentials in Brief
2 Definition of Uterine Inflammation
2.1 Bacteria in the uterus
2.2 Open uterine inflammation
2.3 Closed uterine inflammation
3 How Does a Pyometra Occur?
4 Older Female Dogs Are at Increased Risk
5 What are the Symptoms of Pyometra?
5.1 Thirst as a symptom of a closed uterine infection
6 How Can Uterine Suppuration be Treated?
6.1 Removal of the uterus and ovaries
6.2 Conservative treatment
7 What If the Disease Goes Undetected?
8 How to Prevent the Worst! 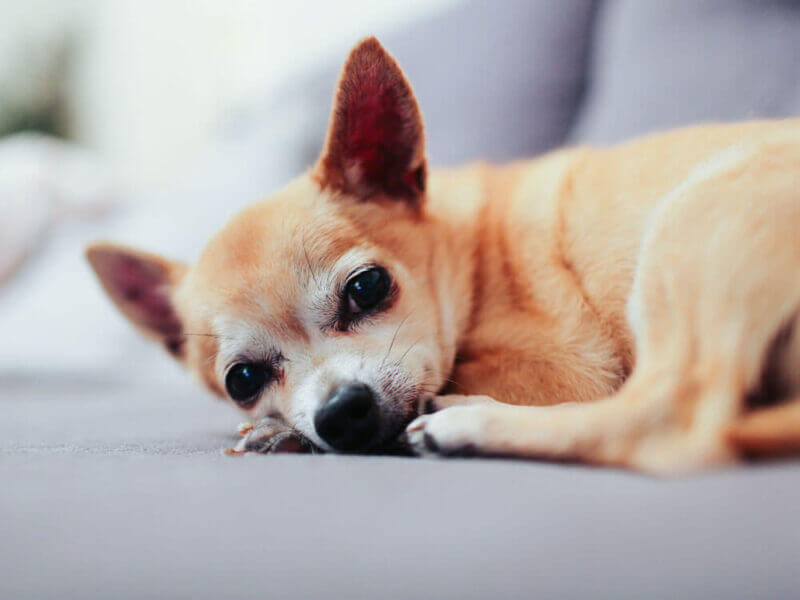 Uterine inflammation is a serious disease that usually occurs after the heat has subsided. The medical term is pyometra.

Bacteria in the uterus

A pyometra is a purulent inflammation in the dog’s uterus. In most cases, it is caused by E. coli bacteria. The bacteria find an optimal climate for reproduction in the uterus so that they soon pass into the bloodstream. An initially local suppuration quickly turns into a systemic problem that threatens the entire organism. It is not uncommon for pyometra to lead to death – especially in older bitches with a weakened immune system. A distinction is made between open and closed uterine inflammation.

With open pyometra, inflammation occurs while the cervix is still open. The pus does not stay in the uterus but can drain through the cervix and the cervix. This is not (yet) a systemic problem.

The closed uterine inflammation develops about four to ten weeks after heat. At this advanced stage, the cervix is already closed again. The bacteria have now taken root in the uterus. By closing the cervix, they find an ideal environment for reproduction. The resulting pus can no longer drain and instead accumulate. Little by little, toxins are formed. At this stage, the toxins pass quickly into the blood and are distributed throughout the body.

How Does a Pyometra Occur?

Purulent uterine inflammation in dogs usually develops in a certain phase of the cycle: the so-called metestrus. This phase takes place after heat, i.e. when the bitch is either pregnant or pseudo-pregnant. A sharp increase in the pregnancy hormone progesterone in the blood ensures that the cervix is closed. In addition, all of the uterine muscles are now set to rest. Bacteria that got into the uterus during the so-called heat can optimally multiply under these conditions.

Older females in particular often suffer from pyometra. The reason for this is on the one hand a weaker immune system than in younger dogs. On the other hand, older bitches have had a large number of cycles in their lives. Each cycle leaves small marks in the uterus – regardless of whether pregnancy occurs at all.

With every heat, the uterine lining builds up in order to prepare for possible implantation of the embryos. If there is no pregnancy, the thickened mucous membrane recedes. With every heat, however, tiny changes remain, mostly in the form of small niches in the tissue. Bacteria prefer to settle in these niches.

What are the Symptoms of Pyometra?

With open uterine inflammation, the pus can drain through the vagina. This manifests itself in the form of greenish-yellow, foul-smelling discharge in large quantities. Because of the color and smell, the discharge is often mistaken for diarrhea. With a closed pyometra, there are unfortunately no absolutely clear symptoms.

Thirst as a symptom of a closed uterine infection

A classic sign is a greatly increased water intake by the female. At this stage, the suppuration is well advanced and the toxins are in the bloodstream. The female now instinctively tries to flush the toxins out of the body with water. It now swallows about twice to three times as much water as usual. Here owners should pay attention! Other advanced symptoms include:

How Can Uterine Suppuration be Treated?

If the female is already in poor general condition, treatment with infusions is necessary. In this way, the animal is stabilized for the following measures:

Removal of the uterus and ovaries

If the pyometra is closed, castration is usually carried out. In what is known as an ovariohysterectomy, the ovaries and uterus are completely removed. An antibiotic is then administered to flush the toxins out of the organism. This must be taken according to the prescribed dosage and until the end. Otherwise, resistant germs can develop.

Treatment exclusively with drugs is also possible, but not always successful. The bitch is also given antibiotics. In addition, drugs similar to progesterone ensure that the cervix opens again and the pus can drain away. This so-called conservative treatment does not always lead to success. There are also frequent relapses, which then quickly end in death.

What If the Disease Goes Undetected?

If a purulent uterine inflammation is not treated in time or not treated at all, the consequences are usually fatal. The bitch’s organism is increasingly weakened by the bacteria. The immune system can hardly defend itself against the toxins. At this stage, the suppuration progresses very quickly.

Often there is a transfer of pus into the abdomen. The result is inflammation of the peritoneum, known as peritonitis. In addition, if a large amount of pus has accumulated, the uterus can tear under the weight. The toxic fluid then pours into the abdominal cavity, causing fatal sepsis.

How to Prevent the Worst!

In principle, uterine inflammation in dogs cannot be prevented. One way to prevent pyometra is to castrate the female beforehand. Here, the uterus and ovaries are completely removed so that there is no risk of suppuration. Tumors are also prevented in this way.

In non-neutered females, you should first carefully observe the discharge after each heat. Behavioral changes can also occur after around four weeks: As soon as your dog becomes calmer and sluggish, maybe even in pain, see a veterinarian. With a purulent uterine inflammation, there is no time to lose.