In 2011, a new cat star was born on the internet. Her name: Nyan Cat. Their mission: to make as many people as possible happy with a song. We explain how this works in the following article.

Miau-Miau, Pop-Tart, or Nyan Cat: This Meme Love Has Many Names 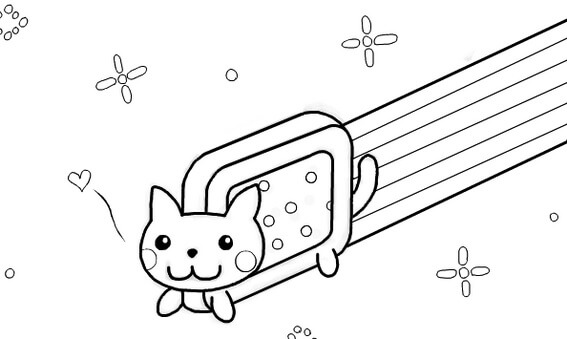 Translated, “Nyan Cat” actually only means “meow-meow cat”. Because of her appearance – her body is originally made of a cherry pop tart – she is often referred to as a pop tart cat. The flying velvet paw always pulls a rainbow tail behind it and has become an integral part of modern internet culture.

Originally it was just an 8-bit GIF animation by Christopher Torres. He sets everything in motion with his GIF upload on April 2, 2011. Another user posted the wallpaper on YouTube with the song “Nyanyanyanyanyanyanyan” and set it in motion. The pop-tart kitten had already advanced to the Internet launch. Meme love has practically taken on a life of its own in recent years. From the Nyan Cat game to musical endless loop battles to various apps, everything is included.

Even Apple is not missing out on this trend. Fans of the little pop-tart cat can, for example, live out their love on the touch bar on the MacBook Pro. If necessary, the well-known velvet paw including a rainbow tail flies over the narrow display and belts out its song. The Nyan Cat Touchbar App is available on Gifthub.

Features and characteristics of the meow-meow cat

In the same year of its appearance, the Nyan Cat video already had over 39 million views. There are now numerous remixes and covers of rainbow kitten and song. The video disappeared for a short time after the copyright was erroneously raised. After consultation between Torres and the video makers, a counter-complaint was filed on YouTube. The video was then released again. Since then, it has been available to all users at all times. On a platform, fans can measure who can “endure” the video longest in an endless loop. There is more about the crazy rainbow kitten on the Nyan Cat Wiki.