Teddy Bear Pomeranian is a cute and attractive animal, very miniature, which is the result of the painstaking work of breeders. These dogs really look like little bears, literally toy pets. Despite their miniature size, they have retained the character of real guards and win the hearts of dog breeders around the world. 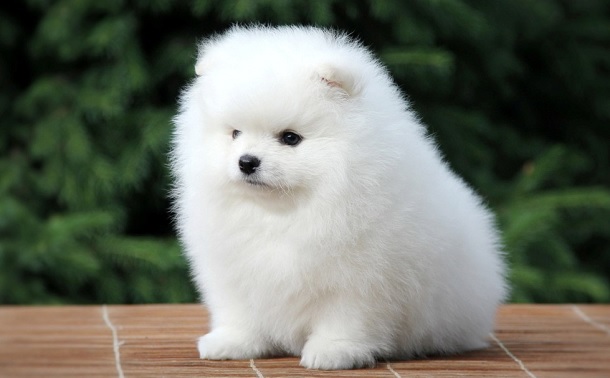 The snow-white color of wool is considered the most ancient. It is assumed that all the ancestors of the modern white-coated bear-type Pomeranians were exclusively white. According to the breed standard, only white wool with the same undercoat is allowed. Inclusions of other shades are considered breed defects.

Important! Today such Pomeranians are very rare. Breeders note that it is very difficult to achieve a persistent color.

Today, the Bear-type White Pomeranian is a rare breed that is quite expensive. This is due to the receipt of a litter of carriers of the snow-white gene. In order for the puppies to get a stable snow color, all their ancestors must have the same color.

The main feature of these cute dogs is in the color and structure of the muzzle. According to the standard, the conformation of the dog suggests a difference from other oranges in the structure of the head. Otherwise, they are very similar to their breed counterparts.

“Teddy Bears” have a shorter and more flattened muzzle, unlike other Pomeranians. However, in the struggle for profit, many unscrupulous breeders try to breed pets with the shortest nose and jaws possible. They do not think that such an anatomical feature is undesirable for the dog.

They also have a smaller size than other Poms. Sometimes they are even called dwarf ones since they look as pocketable as possible against the background of other dogs. But at the same time, they are distinguished by their courage and wayward temperament.

Otherwise, these dogs do not differ from their relatives either in temperament or in appearance. Their body is quite strong, the coat is fluffy, with a dense undercoat. The ears are triangular in shape, located high on the head. The tail is well furred and set high on the croup, curling over the back.

It can be quite difficult to get a snow-white or black color. Breeders note that even when crossing individuals of the same color and having ancestors with the same gene in color, you can get an animal of a larger size or the coat will be of poorer quality.

All dwarf Pomeranians, including the white one, appeared thanks to the selection work of the Japanese. It was they who gave this mini-miracle to the world. White dwarf or mini Pomeranians are smaller than their counterparts and look like little fluffy bears. Very cute. Of course, they are kept only in apartments.

Pomeranians bear type are considered companion dogs that love to spend time with their owner, get along well with children, and love to spend time in active games. The only drawback of such miniature dogs is their willfulness and frequent, very loud barking. Unfortunately, this temperament trait is almost impossible to adjust when training a dog.