Fish with white color is practically not found in wildlife. This color does not allow small representatives of the ichthyofauna to hide from predators. When keeping aquatic inhabitants at home, such danger simply does not exist, so the range of white fish is presented on the market quite well. In our article, we will tell you about the white scalar and the features of its content.

A white scalar is a breeding form of the common scalar (Pterophyllum scalare). Its characteristic feature is a completely white body color without any spots. The fish looks very impressive in aquariums with live plants because the white color suits the angelfish like no other. This color has always been associated with purity, purity, and lightness.

Often this group includes albino forms of scalars, which are easy to distinguish by the red iris of the eyes. 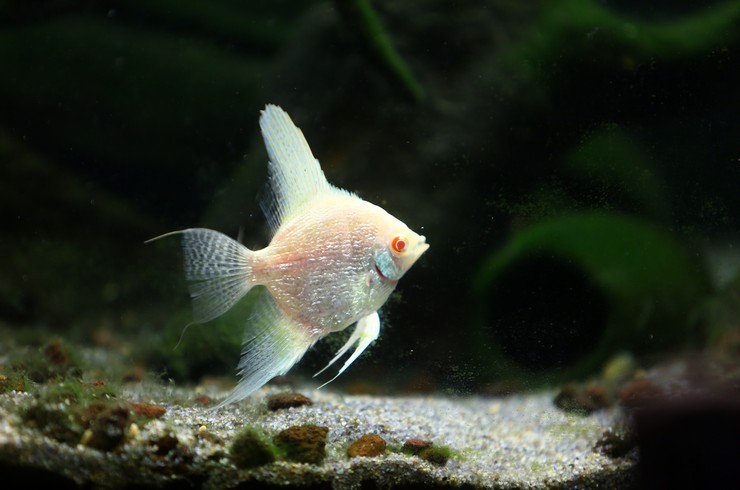 The breed was obtained as a result of the painstaking work of breeders who carried out a huge number of crosses and selected the most successful individuals with a snow-white color.

The content of the white scalar does not differ at all from other breeds. She will undoubtedly become a decoration for any tropical aquarium. 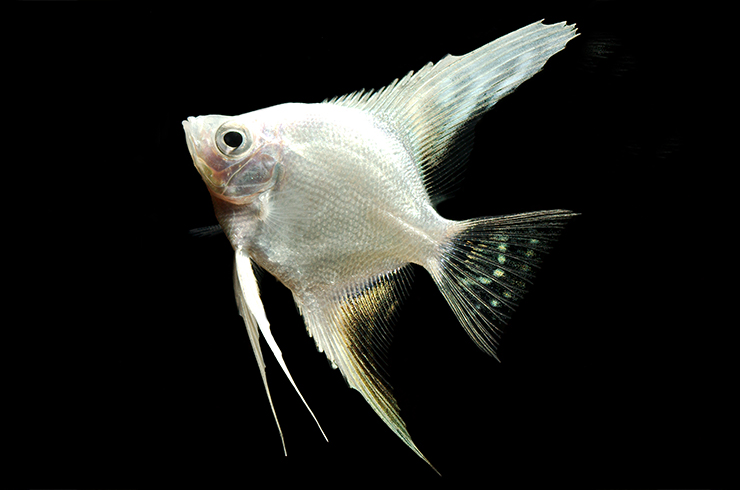 The terminal rays of the caudal fin and the pectoral fins are filiform. The scalar’s head is pointed with a small mouth and large eyes. This body shape is due to the fact that the ancestors of the white angelfish in the wild hide among the dense thickets of aquatic plants.

The body of the white scalar has a uniform color; other colors should not be present on it.

Since the white scalar is a selective species, it will not work to meet it in nature. If such individuals appeared, they would be the first to be eaten by predators, because the absence of a protective coloration would not allow them to hide.

With distant ancestors, the white scalar is related to the love of soft and acidic water, because natural forms live in the tropical rivers of South America – the Amazon and Orinoco.

For the comfortable maintenance of scalar, you will need a spacious aquarium with a volume of at least 80 liters per individual. The fish look most impressive in high (50-60 cm) aquariums. Young individuals are kept in small groups; as they mature and form pairs of weaker scalars, they have to be removed.

It is best to design your aquarium in a natural style. Sand or small pebbles are laid at the bottom. It is desirable that it be dark in color, so the fish will look even more contrasting. The scalars do not dig in the ground, which is their major advantage. You can and should plant more living plants in the aquarium: long-stemmed, broad-leaved, floating, ground cover. Fortunately, white scalars are indifferent to plants, only occasionally allowing themselves to nip off a piece. Natural stones and driftwood look good as decorations. It is better to leave the place in the center of the aquarium free, your pets will freely swim here, and you can admire them. 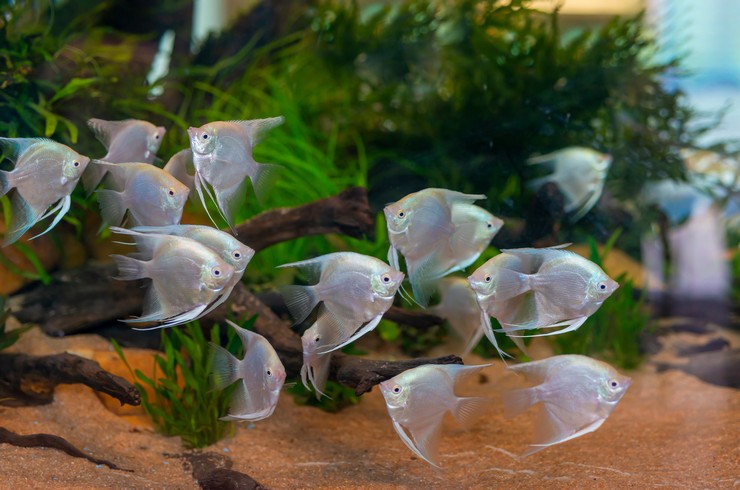 High-quality water is the key to a long and healthy life of scalars. The aquarium should be equipped with a powerful external filter and efficient compressor. The presence of a thermostat is also required in order to maintain a comfortable temperature for these heat-loving persons.

To exclude the accumulation of compounds hazardous to the health of fish, it is necessary to replace 20% of the water in the aquarium with fresh water once a week. But I would like to warn you that it is strictly not recommended to pour tap water into the aquarium immediately. It often contains chlorine and heavy metals that can kill your pets. Add Tetra AquaSafe Conditioner to freshwater instantly. It will help to avoid the lengthy procedure of settling water and will immediately make it suitable for fish.

Despite the fact that the scalar is a real cichlid, her character is quite calm, which allows her to be kept with other ornamental fish species in a common aquarium. They get along best with those neighbors with whom they grew up. If you try to add new fish to the “old-timer” scalar, then aggression is often manifested on its part. Ornamental fish from 4 cm in length are best suited. Smaller species can fall prey to the scalar. In neighbors to white scalars, you can choose viviparous fish (mollies, swordtails), labyrinths (lalius, gourami), irises, neons, large tetras, peaceful catfish (corridors, ancistrus). 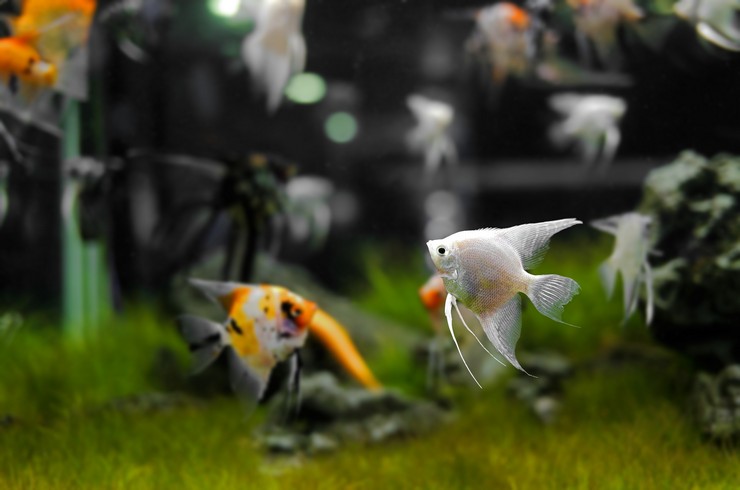 Unsuitable neighbors will be large predatory fish – makers, astronauts, Managua cichlazomas, as well as all varieties of goldfish that love cool water. White scalars often do not get along with barbs, which can easily pluck the fins of the fish.

White angelfish are unpretentious in feeding and are able to eat any kind of food. However, for a number of reasons, it is better to abandon live and frozen, because they are not balanced, and they themselves often serve as a source of infection in the aquarium.

It is best to feed white scalar with high-quality dry food. Fish prefer to take food from the surface of the water, so flakes and chips will be the most suitable form:

It is best to breed scalar at home in a separate spawning aquarium with a volume of 80 liters or more. Several bushes of deciduous plants (echinoderms, cryptocoryne) are planted in it. Several flat stones can be placed.

Sexual dimorphism in white scalars is not pronounced. The main feature in adults is the line of the back and abdomen. In females, it is almost straight, but in males, it makes an angle. Also, females often do not form a fatty bump on the forehead. During spawning, a wide ovipositor can be seen in females. 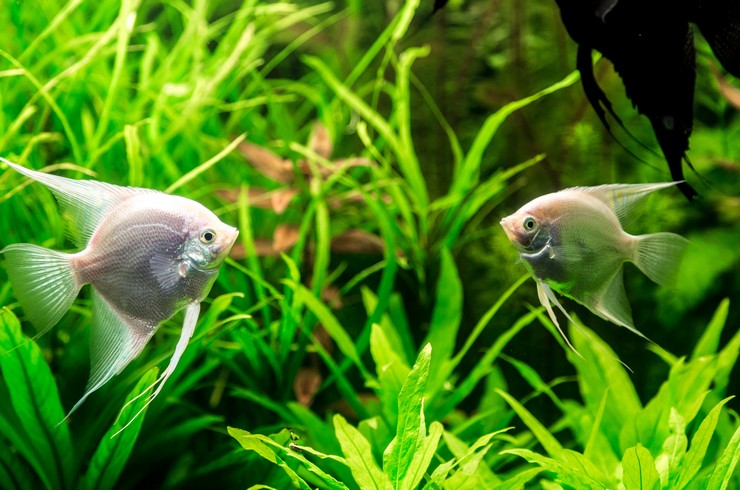 Spawning can be stimulated by raising the temperature to 28-30 ° C and frequent water changes, which should be soft. In this way, we simulate the rainy season in the natural environment.

A couple, ready to spawn, first of all, clears the area for eggs of dirt and mucus. Further, the female lays small eggs in rows, and the male swims over them and fertilizes with his milk. At one time, the female can sweep away several hundred eggs.

The incubation of eggs lasts several days, after which the larvae are born. They use the resources of the yolk sac for another week and then switch to self-feeding. After fry emerges, it is recommended to make frequent changes and remove uneaten feed. Growth rates are high, with white scalars reaching sexual maturity at the age of 8-12 months.