Admittedly, the sight of a digging dog is a bit funny. The front paws eagerly shovel away earth, the head has temporarily disappeared in the hole and only the rear part of the four-legged friend can be seen. But the fun factor stops at the latest when your own garden is like a single molehill or when third parties, such as farmers, complain about the deep holes in the field. But why is that and what can you do about it? This advisory article provides answers.

Contents hide
1 Why Dogs Dig: 5 Possible Reasons
1.1 Tracking wildlife
1.2 Pantry
1.3 Protection from the summer heat
1.4 Out of boredom
1.5 Nest building
2 How Do I Get My Dog Used to Dig?
3 Are There Also Positive Things About Digging?
4 Should Dog Owners Forbid Digging?
5 As an Alternative: Digging Only in a Certain Place 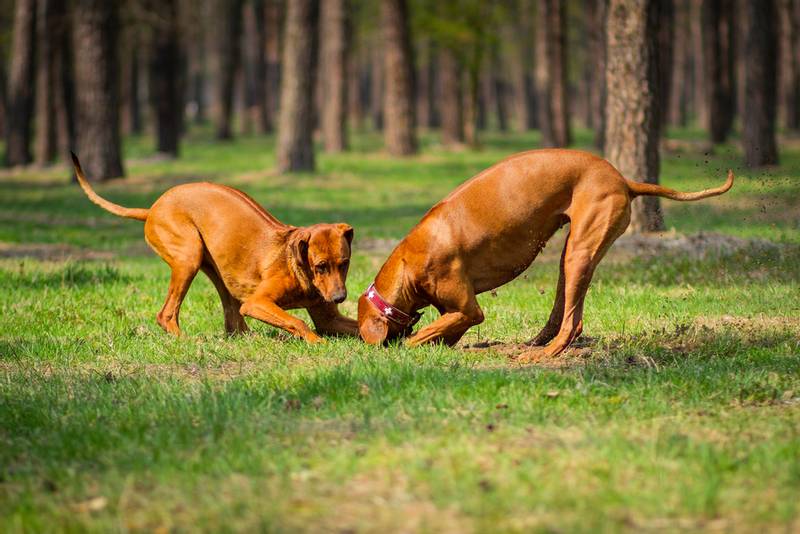 There are a number of reasons for this behavior. Before you stop digging as a dog owner, it is important to first find out the motive.

Especially dogs with a strong hunting instinct – such as dachshunds or podencos – feel the need to get to the bottom of a mouse hole or a badger and fox den. If dog owners do not stop the eager four-legged friend, it will lead to them digging as far as the wild animals. And since Fuchs and Co. are rarely happy about an intruder, an attack cannot be ruled out. In addition, the wild animals are frightened and frightened. As an alternative to real prey hunting, dog owners can offer fetching or tracking work.

Like a squirrel preparing for the cold season: some dogs dig a small hole to hide their food there for bad times. However, four-legged friends who live in a family and enjoy the benefits of a full bowl do not need a pantry in the garden. Therefore digging for this motivation is to be forbidden in principle. Otherwise, digging can become significant, and lovingly planted flowers will be razed to the ground.

Protection from the summer heat

Dogs are known to be troubled by high temperatures. If a garden does not offer a shady place in which the four-legged friend can withdraw, he will quickly take the initiative. A pit in the earth is cool and therefore more comfortable for the dog. As an alternative to a ditch, dog owners offer their four-legged friends a place under a parasol. A dog pool provides additional refreshments. If the temperature is extremely high, it is advisable to take a nap in a cool home.

Nothing but yawning boredom in your own garden? Often, when dogs feel under-challenged and are not being used to full capacity, unsightly behavioral patterns come to the fore. In your own four walls, for example, this can represent the destruction of the furniture. In the garden, on the other hand, the lawn has to believe in it. Here digging represents a cry for attention. The dog wants its humans to be occupied with it. If the four-legged friend is agile and suitable for sport, there are many activities such as agility, sniffing, or ball games in your own garden. After an extensive workout, a four-legged friend usually no longer feels like strenuous digging.

A bitch’s hormones may be responsible for shoveling. And then when the bitch is in heat. She would like to build a litter cave for her “offspring”. The throwing bearing can – as long as it is not prevented – take on an enormous dimension. If you don’t want that, you should strictly forbid digging. A lot of distraction in this stressful phase for the bitch is exactly right here. Long walks, varied games or brain teasers help to change the bitch’s mind.

How Do I Get My Dog Used to Dig?

As with any training with a dog, the magic word is “consistency”! A dog does not understand when it is occasionally denied digging and an exception is made other times. This means that dog owners should – if it is not desired – stop the behavior from the start. In addition to a general ban, there is also the option of only allowing the dog to dig at a certain point – you can read more about this in the last paragraph. In the forbidden zones, on the other hand, a clear “No” or any word that you utter about your darling in the case of undesirable behavior patterns is given.

But a simple ban is not always promising:

For some reason, offering an alternative is helpful.

Are There Also Positive Things About Digging?

The fact is: digging does not only result in a chaotic garden. It’s good for dogs too! Shoveling has the following positive side effects:

It shows the topic “Dog digs: Why and how to wean?” is more complex than it first appears. Whether the four-legged friend can let off steam in their own garden under supervision is up to their people. But dogs should be stopped in their “digging joy” on other people’s properties, for example on a farmer’s field. The damage to the harvest and the risk of livestock falling into a ditch are considerable.

There are also dangers for dogs. For example, if the hole becomes a considerable size and the dog can slide into it in wet weather conditions. Or if other wild animals feel disturbed, e.g. during the breeding and setting time, and defend their den. In many cases, dogs are happy about alternatives, in some only consistent prohibition helps.

As an Alternative: Digging Only in a Certain Place

If you don’t want to completely deny your dog the joy of digging, you can make a compromise. There is the possibility to train a dog step by step to only allow digging at a certain point and under supervision. A small corner in the garden is ideal for this, which does not have to look neat. In this way, the four-legged friend can pursue his favorite activity without destroying the beautifully laid out flower bed.