Drinking enough is just as important to a dog’s health as it is to a human. Dog owners should therefore keep an eye on how much their four-legged friend is drinking. There are many possible reasons why dogs sometimes fail to drink enough. We have summarized the seven most common causes of inadequate drinking behavior for you.

Contents hide
1 How Much Does a Dog Drink?
2 Causes: Dog Does Not Drink or Does Not Drink Enough
2.1 Eating behavior and change in feed
2.2 Sickness or pain
2.3 Vaccination reactions
2.4 Stress and psychological causes
2.5 Operations
2.6 Heat
2.7 Ranking with several dogs
3 Dog Does Not Want to Drink: When to See the Vet?

How Much Does a Dog Drink?

Dogs need around 100 milliliters of water per kilogram of body weight every day in order to supply their bodies with sufficient water. How much the dog drinks also depends on the dog’s health, age, diet, and daily level of activity.

If the water bowl at home is always full and does not become empty, this is the first important indication of disturbed drinking behavior. But also pay attention to whether your dog drinks a lot while out and about, for example when swimming or out of puddles. If the dog does not drink, dehydration will gradually develop. Symptoms such as weakness, tiredness, apathy, or panting are typical when there is insufficient fluid intake. In the long term, there are serious health risks. 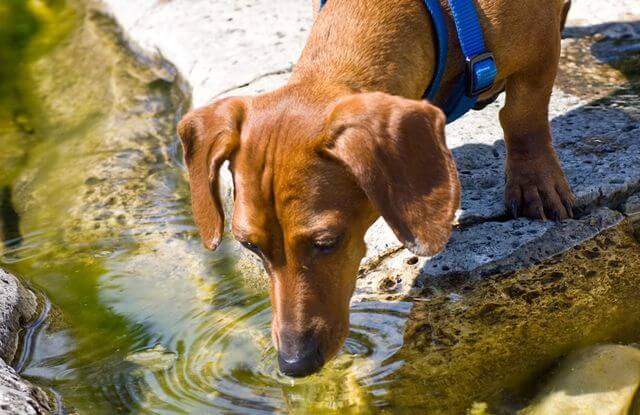 Eating behavior and change in feed

The dog’s diet has a particularly strong effect on drinking behavior. If your dog eats mostly wet food, he is already ingesting a lot of fluids through the food. When switching from dry to wet food, it can often be observed that the dog drinks little. Switching to barps also affects the fur nose’s thirst: Fresh meat and vegetables contain more water than dry food and therefore cover some of the fluid requirements. The result: the dog drinks less.

Does your dog not drink and show typical symptoms? Then maybe an infection or pain is the cause of the lack of water intake. Digestive tract diseases that are associated with diarrhea or vomiting, dogs often lack an appetite, so that the dog neither eats nor drinks. Many dogs also refuse food and water if they suffer from painful illnesses such as toothache or inflammation of the gums.

Vaccinations are used to prevent diseases in pets. Occasionally, however, a dog does not tolerate the vaccination. If the dog reacts to vaccination, it is called vaccination damage syndrome (ISS). Side effects such as fatigue, fever, itching, or indigestion are typical symptoms of a vaccination reaction. A lack of thirst is also a symptom that can occur after a vaccination. Usually, the symptoms subside by themselves, and drinking behavior returns to normal.

It is not only in humans that stress can hit the stomach. Even dogs that are in an unfamiliar life situation often refuse food or water. Does your dog drink too little, but doesn’t show any other symptoms? Then consider whether your pet has recently been exposed to increased stress, for example from a disturbed everyday routine, a move, or a new addition to the family. If the dog shows further behavioral problems, there may be psychological causes.

After operations under anesthesia, for example after castration, dogs are often particularly thirsty. Sometimes, however, the newly operated pets do not drink at all because they are still too weak or feel sick from the anesthesia. If the dog does not drink at all or too little, watch him carefully. Often the thirst comes back on its own as soon as your four-legged friend feels better again. If the dry spell persists, contact the attending veterinarian.

When a female is in heat, the male reproductive instincts are awakened. The excitement often results in males drinking and eating little when a bitch in heat is around. The dog has other things on his mind for a short time – that usually go away quickly and hunger and thirst return.

Do you have several dogs and one dog is not drinking enough? Then this is possibly due to the dominant behavior of the other dogs. There is a hierarchy among several dogs. If a conspecific does not adhere to the hierarchy, there will be arguments or fights between the animals. So it can be that a dog is very intimidated and does not dare to drink. In this case, it helps to provide the dogs with food and water separately from each other so that there is no competition.

Dog Does Not Want to Drink: When to See the Vet?

If the dog is a little less thirsty for a day, there is still nothing to worry about. Often the causes are quite harmless. However, if you find that your fur nose does not drink for several days, you should go to the vet as a precaution. Insufficient water intake can lead not only to short-term dehydration and fatigue but also to serious conditions such as renal insufficiency and kidney failure.