Can dog licking be compared to human caress? Or does licking mean something else in dogs? Dogs can show their love, loyalty, and obedience in a number of ways.

In dogs, licking is deeply rooted. Puppies are licked by the mother. This is used for drying and cleaning shortly after birth. The puppies, on the other hand, when they are a few weeks old, start licking their mother’s lips so that she strangles food and gives the puppy to eat. Young dogs try to appease older dogs by licking their lips.

Contents hide
1 Licking as a Message
1.1 Submission and humility
1.2 Hunger
1.3 Malaise
1.4 Dirt
1.5 Try to comfort
2 Risk of Infection Through Licking
3 Important for Dogs

Licking as a Message 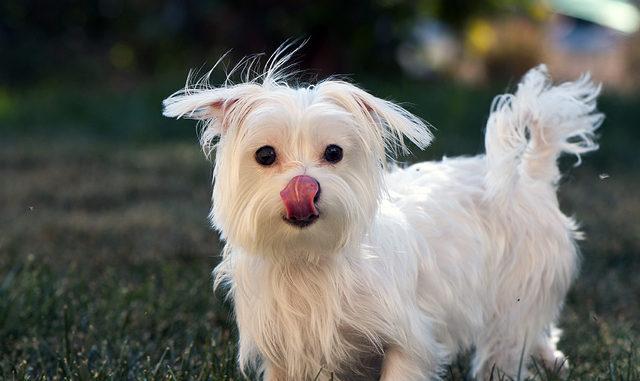 Dogs lick for a variety of reasons. They use it to convey various messages. Dogs show sympathy and friendship by licking strangers. It depends on the dog’s personality and how often or how little he licks. With some dogs everyone is licked in a friendly and playful way, with other dogs this is limited to certain people to whom they show their affection.

Dogs that live in packs show their admiration and humility to the leader by licking them. They also use social behavior to communicate with their owner. Man feeds the dog, takes care of him, and takes care of his education and a certain order that the dog has to keep. The dog subordinates himself and shows his humility, his devotion, and his respect by licking it off.

Dogs do not always want to express their affection by licking the human hand. In many cases, he simply wants to draw attention to the fact that he wants something, for example, that he is hungry. By licking its hands, the dog tries to achieve something in a, particularly friendly way.

When dogs feel dirty, they lick their legs, genitals, and other parts of the body to clean themselves. Similar to cats, dogs try to groom themselves, but not as intensely.

Dogs are very good at perceiving people’s moods. In different situations, they can tell whether people are sad, depressed, or angry. They try to comfort by licking when their people are crying or sad. Dogs also try to balance people’s nervousness. They try to grab attention to distract and cheer people up.

Risk of Infection Through Licking

Many people feel uncomfortable when the dog’s wet tongue slobbers through their face or licks their hands. No matter how much they love their dog. A 2015 scientific study by the University of Arizona confirmed that dog owners who have direct contact with their pets are happier. In addition, they are in better health and therefore seem less prone to disease. Scientists suspect that the presence of healthy bacteria in the gastrointestinal tract strengthens the immune system in dogs’ saliva.

Licking is by no means pointless for dogs. Dogs learn early on from their mother dog that licking is worthwhile. They use the gesture to show people that they are comfortable around them and that they submit. But also to ask something politely.