The first mention in the literature of wire-haired dachshunds appeared in 1797. The first attempts to breed a species with a well-developed hunting instinct were unsuccessful, the dogs were more and more decorative. Dogs of this species love attention, affection, and are distinguished by their mobility. 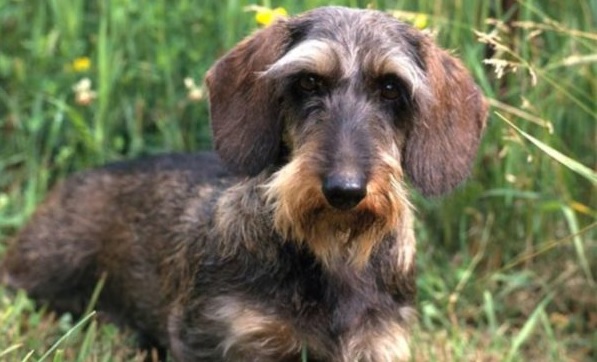 A distinctive characteristic of this species is a hard and thick coat, which should not be wavy or curly, as well as the presence of a bristly mustache and beard. The body is evenly covered with tough, tight-fitting, up to 3 cm long wool, with a thick undercoat. On the face, eyebrows, and ears, the hair is short and bristly. Thick, bushy eyebrows. Hair on the chest, shoulders, and back of the head may bristle. The tail becomes thinner to the tip, the hair on it is tight, does not form flags or depressions.

The color of wire-haired dachshunds is mainly red, light, and dark shades. There are animals with spotted hair, the main color is dark (black, gray, brown), but there may be random spots of gray or beige. Small white patches may appear on the chest. Black and tan dachshunds have less coarse coats than brown, ginger dogs.

Due to its short length, the wool does not get dirty, protects the animal from moisture, heat, and cold. It is not recommended to cut the dog, because the quality of the coat deteriorates, but trimming (combing) is possible, especially during the molting period. It is enough to brush your pet with a brush.