A large number of these birds are found in cities and suburbs. However, more often the wood pigeons live outside the city, in dense forests or rural areas, where they feed in the fields of grain crops. 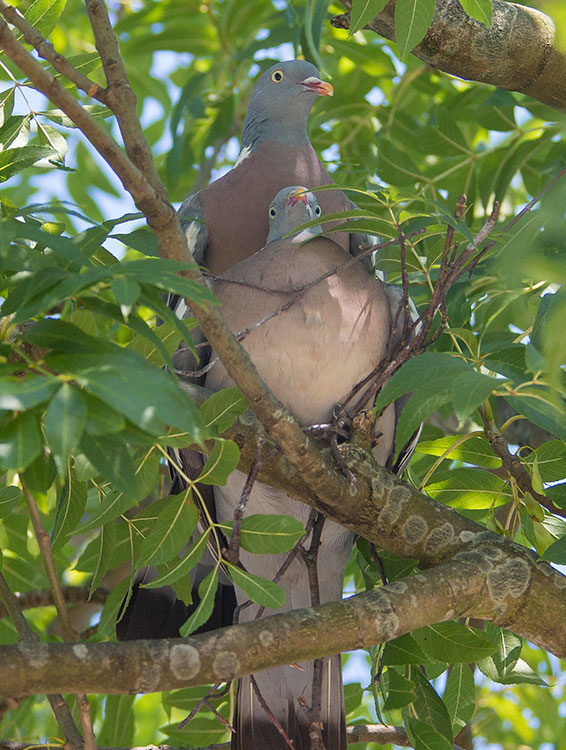 Breeding period:
in some regions – all year round, in Europe – from April to September.

Habits: except for the nesting period, pigeons are kept in flocks.

Domestic and urban gray pigeons, as well as turtle doves.

What Do Wood Pigeons Eat?

In some areas, pigeons feed on crops at certain times. In autumn, the diet of these pigeons is supplemented with clover, and in spring, flocks of these birds descend on the fields where mustard grows. In summer, they can lead to significant losses in grain fields. Birds living in southern countries also feed on wild figs.

Anyone who had the opportunity to watch pigeons at a watering hole noticed that they drink differently from other birds. These pigeons immerse their beak in water and suck it in through special holes. Before swallowing water, pigeons raise their heads for a short time. 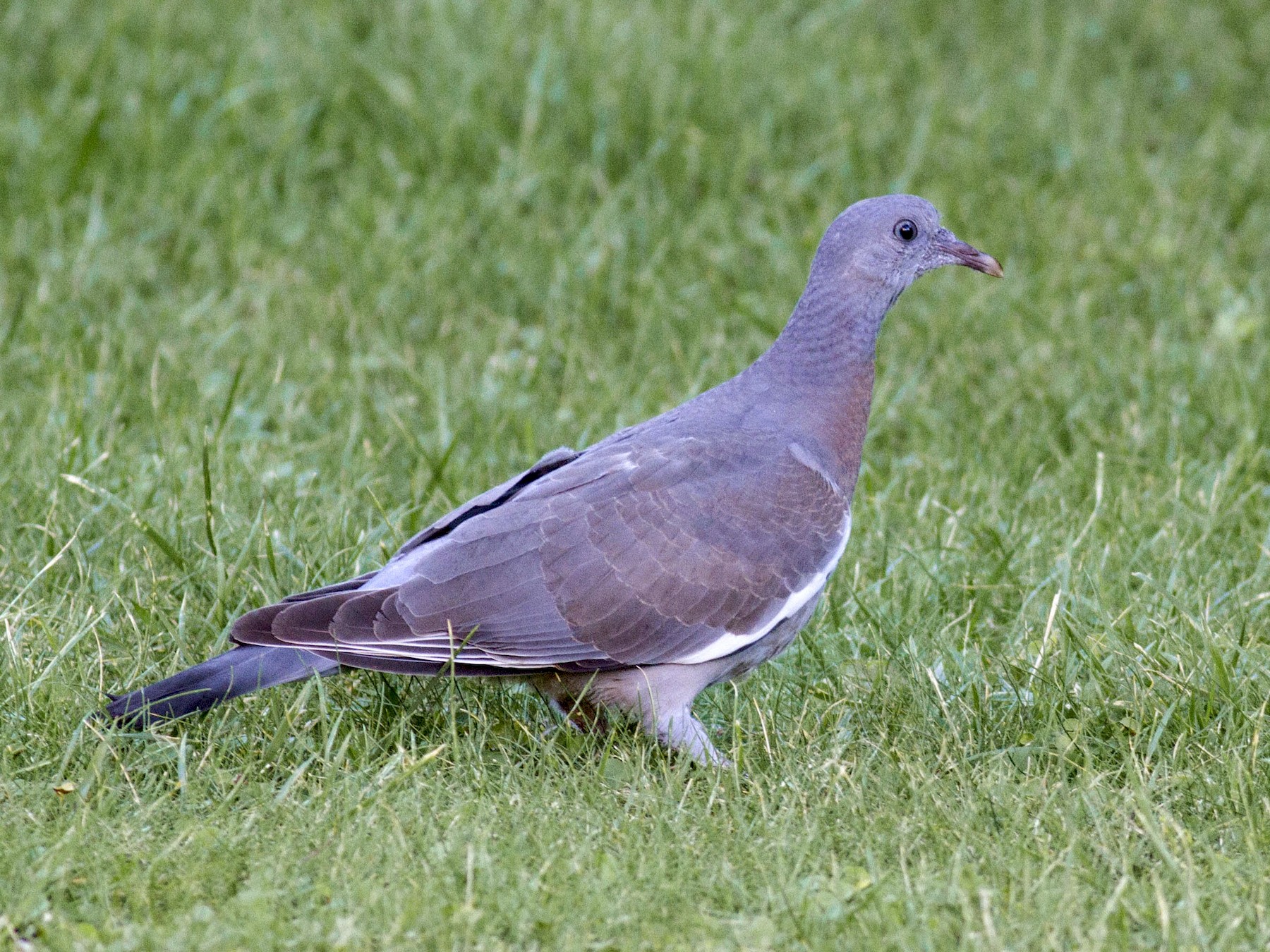 The pigeon lives in both flat and mountainous areas. Most of all, birds like deciduous and mixed forests, but they often settle in coniferous forests. When the nesting period ends, wild forest pigeons keep in large flocks, which gather in the evening at commonplaces of the night. Male pigeons spend nights there even when females are incubating eggs. In the countryside, the borders between the fields, overgrown with bushes and trees, are a desirable place for these pigeons to spend the night. Farmers do not like pigeons because they often feed in the fields. In city gardens and parks, on the contrary, people are happy with their presence and often feed the birds.

With the onset of the nesting period, the male, wishing to attract the attention of the female, coos loudly and shows his flying abilities. The female, who has accepted the courtship of the male, together with the chosen one, performs another ritual. During it, forest pigeons touch each other with their beaks and clean each other’s feathers. The most convenient place for nesting is very dense tree crowns. These birds make a nest from thin branches. Very often pigeons use old nests of magpies, crows, and squirrel hollows. The female lays 2 white eggs, which the parents incubate together.

After 15-17 days, chicks hatch from the eggs. Parents feed them with a special substance – “pigeon milk”, which is formed in the goiter of adult birds. Pigeon chicks “drink milk”, deeply immersing their beak in the goiter of one of the parents. After a few days, they begin to get used to normal food. Chicks begin to fly in 7 weeks.

The Enemies of Wood Pigeons

The main enemies of the wild pigeon are big birds of prey. In recent years, due to human fault, the number of birds of prey has significantly decreased, which has led to an increase in the population of wild pigeons. Sometimes pigeons become prey for the pine marten, which deftly climbs trees. On the ground, they are hunted by foxes and badgers, since pigeons are large enough and cannot immediately rise into the air. In some countries, pigeons are so numerous that they are considered pests and destroyed. A very large number of pigeons are shot in these regions every year.

Observation of the Wood Pigeons

At certain times of the year, when cereals are ripe, you can meet with a pigeon in the field – the bird collects seeds there. In Western Europe, pigeons are quite numerous in cities. They live in parks or gardens. The dove betrays its presence with a typical cry. The dove, which is frightened, flies from the top of the tree, loudly beating its wings. In many places where these birds are accustomed to the presence of people, they allow a person to come close to them and willingly accept food from his hands – bread crumbs. 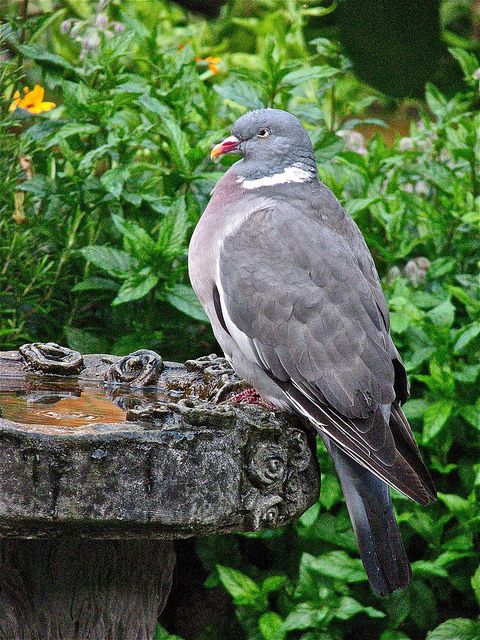 Wood pigeons are very cautious birds, so hunting them is not such an easy task. Now the number of wildwood pigeons has decreased significantly.

The wood pigeon is the biggest pigeon in the forests of Eurasia. Body length – up to 44 cm, weight – 620 grams. Nests in trees, where it lays 2 eggs. This big wild forest pigeon successfully drives away even ravens from the nest. The chicks are first fed with “pigeon milk”, which is secreted from the parents’ goiter, and then with seeds and grain. His favorite food is acorns and beechnuts, which he swallows whole. For the winter, the birds fly south. They fly in large flocks of 300-500 individuals.

Characteristics of the Wood Pigeon

Adult bird: birds of both sexes are colored the same. Their head, neck, and tail are light gray. The belly and chest are purple. There are green and white spots on the sides of the neck. The back and wings are gray.

Flight: in flight, white spots on the wings of pigeons are clearly visible.

Nest: Braided from twigs, thin roots, hard stems of grass, or shoots. Pigeon chicks stay in the nest for 28-29 days.

Wood pigeon lives almost throughout Europe and in the East to North India. In addition, it inhabits mountain forests in North Africa.