In the middle of the 20th century, when aquarium shrimps were just beginning to appear in the public domain, amateurs had to be content with transparent individuals at first, then red shrimps (cherries) became widespread, and then, thanks to the work of breeders, crustaceans of various colors were obtained. In our article, we will tell you about the little decapod “suns” – yellow shrimps.

Yellow Shrimp is a breeding form of the well-known freshwater shrimp Neocaridina heteropoda. A distinctive feature of the breed is its rich yellow body color. It is sold under different names: yellow pearl, yellow fire, neon yellow.

Such bright crustaceans will always attract attention, but these babies are so appreciated not only for their color. Indeed, in addition to beauty, they are also unpretentious in maintenance, multiply without any difficulties at home, and are of great benefit to aquarists, eating the remains of food and algal fouling. To keep a group of yellow shrimp, you don’t even need too much container. They will become a real decoration of a tropical aquarium with living plants, and you can watch their daily bustle for hours on end. 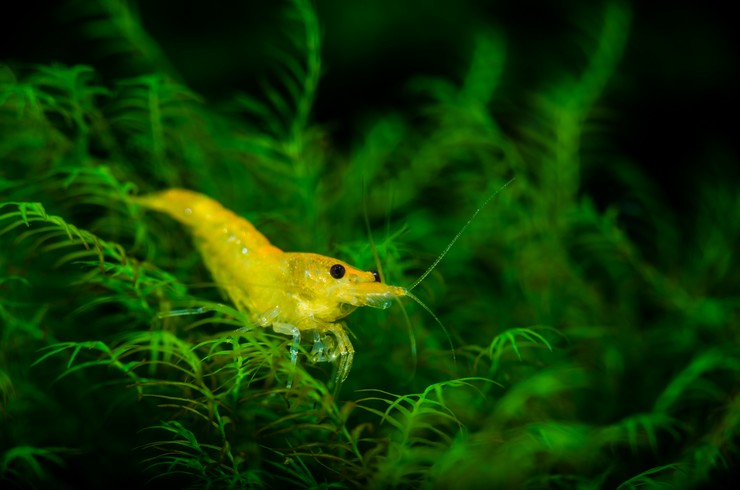 The yellow shrimp is a small crustacean that can grow up to 2.5-4 cm. The body consists of two sections: the cephalothorax and abdomen. The cephalothorax has a dense shell that covers the gill cavities and internal organs of the shrimp, the abdomen is soft, consists of segments with swimming legs (pleopods), and ends with a fan-shaped tail. They perform the function of movement, and in females, they additionally serve to hold eggs. Walking legs are attached to the cephalothorax, as well as legs, which hold the prey and deliver it to the mouth. The eyes are located in the upper part. The main sense organ is long antennae. 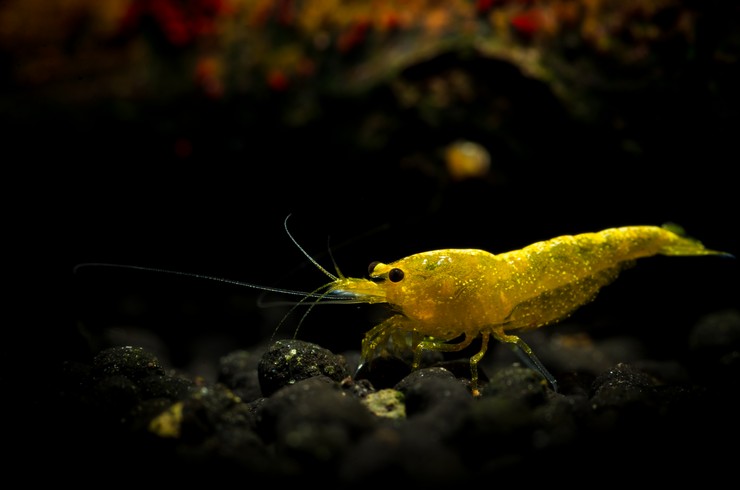 The outer cover of yellow shrimp consists of a dense substance – chitin. It is unable to stretch, so shrimp have to shed it regularly to grow. This process is called molting. Until the new cover hardens, the crustacean grows. During molting, yellow shrimp are most vulnerable. It is recommended to leave the discarded covers in the aquarium because they are a source of nutrients.

The yellow shrimp is a selection form that does not occur in wildlife. It was obtained in 2006 thanks to the activities of German breeders, a few years later the neon shape of a yellow shrimp saw the light.

It should be noted that the natural color of Neocaridina heteropoda is transparent, which allows it to hide from predators as efficiently as possible. Bright aquarium forms would not win in the struggle for existence. 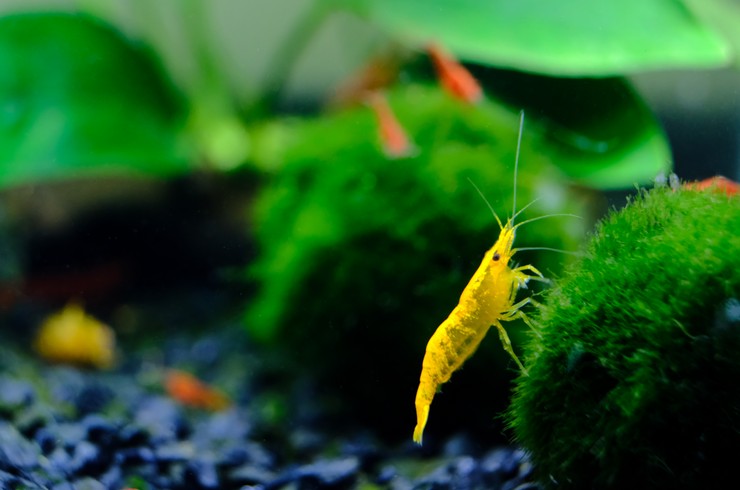 One of the names of the yellow shrimp, which has a rich lemon-yellow color. 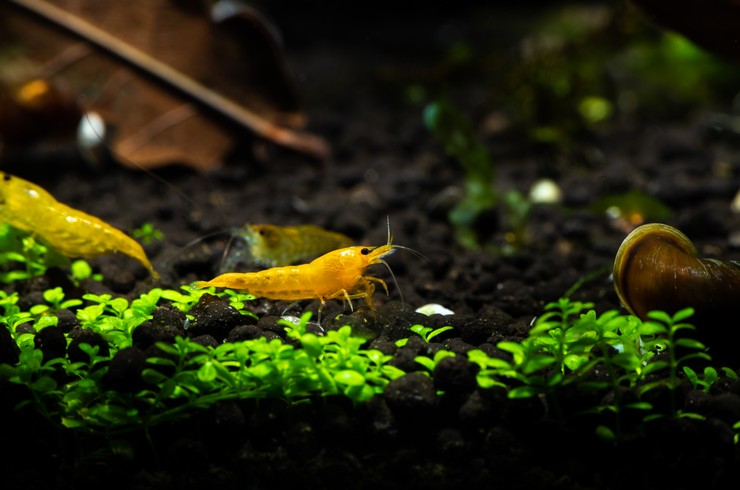 This form was obtained in 2009 and is distinguished by the presence of a neon stripe on the back, which is especially bright in females. 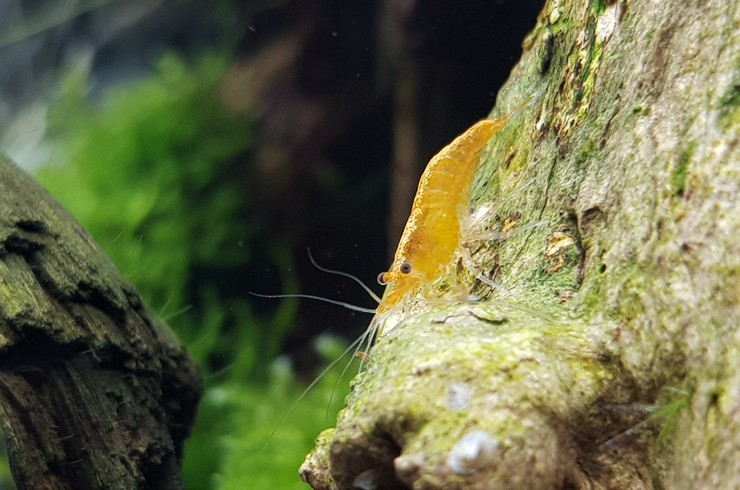 Yellow shrimps are aquarium pets that are unassuming to care for. Even a small aquarium from 10 liters (for 10-15 individuals) is suitable for their maintenance. As a soil, you can use absolutely any medium-sized, suitable for growing living plants. The latter is highly desirable in aquariums with yellow shrimp, as they not only serve as a natural shelter for small and shy crustaceans but also help maintain the biological balance in the aquarium. Yellow shrimp can often be seen sitting in thickets of plants. Various types of mosses (Javanese moss, Christmas moss, etc.), riccia, Ciliophora, ferns are perfect. 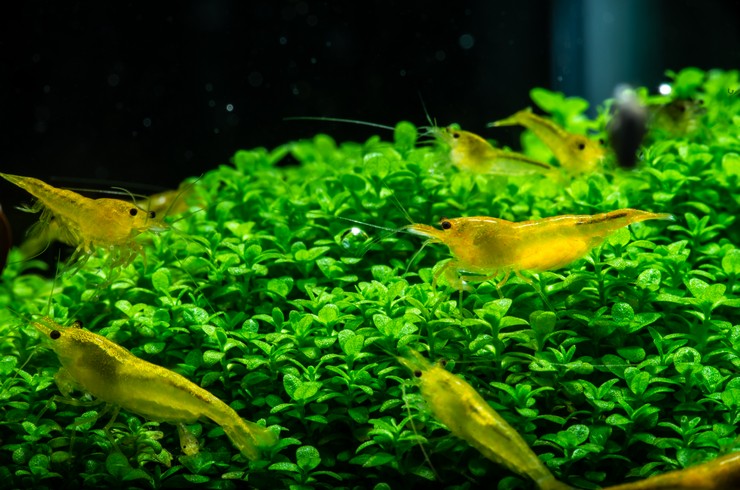 The aquarium for yellow shrimp should be equipped with a small filter (no strong current), combined with a water aeration system, and a thermostat to maintain a comfortable temperature. It is necessary to replace 20% of the water in the aquarium with freshwater weekly. If you are using tap water, be sure to use the Tetra AquaSafe conditioner before pouring it into the aquarium. It will instantly remove hazardous chlorine compounds from the water, as well as heavy metals (such as copper). The dosage of the product is 5 ml per 10 liters of water.

Due to toxicity, copper-based medicines should also be avoided.

Yellow shrimps can live in a fairly wide range of water parameters, but they should not be settled in too soft water. This can lead to a lack of calcium, which is used to build carapace.

Yellow shrimps are absolutely peaceful creatures, they spend most of their time in search of food, “graze” on plants, soil, stones, and a glass of the aquarium, quickly touching their paws. It is better to keep them in groups of 10 or more individuals, which will ensure your regular replenishment. As a rule, shrimps (especially purebred ones) are kept in a species aquarium, but there are no particular obstacles to planting them in a common aquarium. They get along well with peaceful fish species. Good neighbors include guppies, mollies, neons, zebrafish, ototsinklus. The corridor with pygmies, Amanda’s tetra, Iriaterina Werner, Gertrude’s Pseudomugil, and various rasbora will also become good cohabitants.

Do not combine yellow shrimp with other Neocaridin color forms. They are capable of interbreeding, which most often leads to the loss of a unique color or a decrease in its brightness. But other types of small crustaceans can become good neighbors, for example, shrimp crystals, babaulti.

It is not recommended to keep yellow shrimp with any (even dwarf) cichlids and predatory fish. For example, scalars or battles can quickly destroy all crustaceans.

A big plus of yellow shrimp is the absence of any difficulties with feeding. In most cases, crustaceans have enough even “pasture” food – algae and fish food residues. However, from time to time, the shrimp need additional feeding. In such cases, it is best to use quality dry food for shrimp (Tetra Crusta) or bottom fish (Tetra WaferMix). They are completely balanced, rich in selected proteins, and contain the algae Spirulina, which is essential for proper digestion and support of the immune system. Since the diet is dominated by plant products, it is not recommended to feed the shrimp with high-protein live or frozen food, they can lead to gastrointestinal problems or become a source of contamination of the aquarium.

You need to feed the yellow shrimp once a day. The supplied amount of feed should be completely consumed within a few hours. 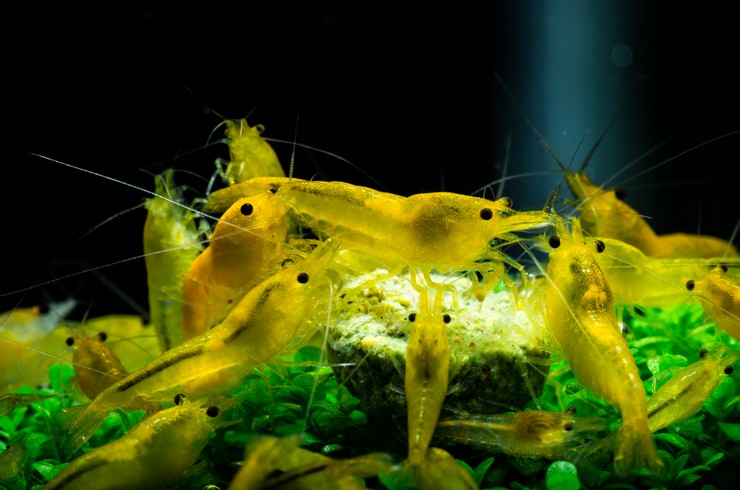 Like other Neocaridins, yellow shrimps reproduce on their own, for this, you do not need to create specific conditions. Distinguishing a male from a female is usually not difficult. Males are smaller in size, not so brightly colored, and in females, you can find on the back “saddle” – eggs that develop in the ovaries, which then descend onto the pleopods (abdominal legs).

Puberty occurs in yellow shrimp at about 4 months of age. After the next molt, the female, ready to mate, begins to release chemicals (pheromones) into the water that attract males. When a meeting of opposite-sex individuals occurs, they perform a small mating dance: they wave their paws and antennae opposite each other. Further, the male turns the partner onto his back and fixes a sperm bag near her genital opening.

After the end of mating, the female ceases to emit pheromones, and the males lose interest in her. Next, the process of laying eggs begins. Leaving the body of the female, the eggs pass through the sperm bag and are fertilized. The number of eggs can be up to 20-30 pieces. The female fixes them on swimming legs with the help of special straps. 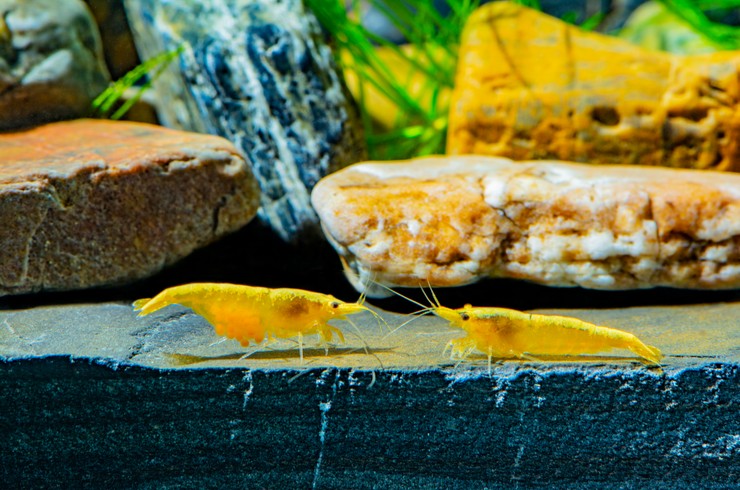 All care for the offspring lies on the shoulders of the female. She cares for caviar, cleans from dirt, removes dead and spoiled eggs. The constant movement of the legs creates a flow of water near the eggs to provide them with oxygen.

Caviar development takes 2-3 weeks. If you find black dots (future eyes) in the eggs, then the process of their development is already coming to an end. Young shrimps are born fully formed and are about 1 mm in size. They are difficult to see in an aquarium as they usually hide in the ground and are almost transparent. It is not necessary to feed the newborns, they themselves feed on plankton and bacterial film, and as they grow, they switch to food for adults. The characteristic color appears in yellow shrimp at about 4 months of age.