A few decades ago, few would have thought that this representative of an artistic breed of dogs intended for sledding would become a favorite pet of many.

The Alaskan Malamute can adapt to the most challenging frosty terrain. A hardy and strong dog in the common people is called the northern train. Dogs can drag a cart or sled for several kilometers. It is one of the oldest sled dogs in the world. The name of the breed comes from the name of the tribe that lived in the Alaskan Mountains. 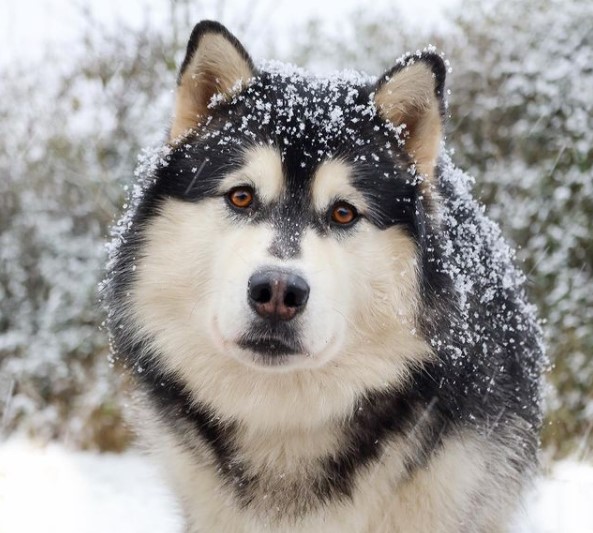 Alaskan Malamute began to be in great demand among people who were seized by the “gold rush” of the last century. At the beginning of the 20th century, many of those who came to Alaska in search of the precious metal set out on a sleigh with a team of these dogs. But there is also a negative point for Malamutes in this story. Due to the greed of many gold diggers, purebred pets were crossed with other breeds of dogs. So people tried to achieve even greater endurance and speed from the animal. As a result, there are now very few true litters of the former Alaskan Malamutes left. A little later, the Americans became interested in breeding and preserving a purebred breed and spent a lot of money on it. This was facilitated by a wave of sports competitions in which the Alaskan Malamutes had no equal. Only in 1926, the population of the breed without mixture was significantly expanded.

In 1935, the official standard for the Malamute was fixed. But the wartime became too harsh for these animals. Many pets were left hungry and abandoned, while others were blown up after expeditions in the Arctic. Such deeds led to the fact that in the world there were about 30 purebred Alaskan Malamutes. Only after 1947, they began to restore the breed, spending a lot of time and effort. As a result, after 20 years, dogs have spread throughout the world. And today, the pet is ranked 18th among the 30 most popular breeds on Earth. 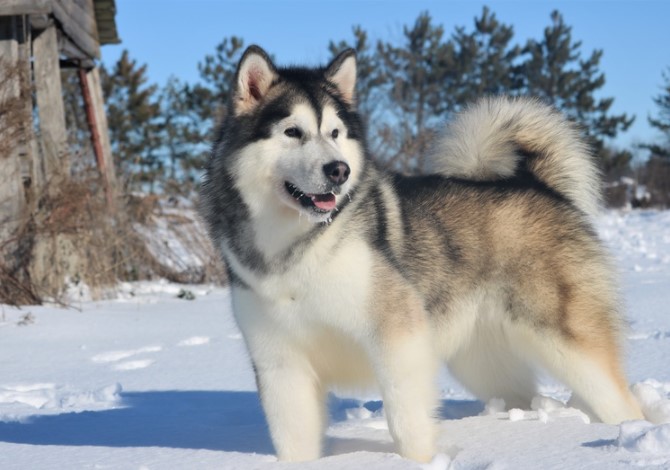 Alaskan Malamute outwardly looks very strong and powerful. Strong build, compact body, and wide chest. The dog’s body is covered with a thick layer of coarse hair with a soft undercoat inside. The average weight of the animal is 35 kg, and the maximum height at the withers is 63 cm. The broad, powerful head demonstrates the presence of intelligence. The ears are triangular in shape and lookup. The dog’s teeth and jaws look intimidating. The eyes of the Alaskan Malamute are set slightly obliquely, they are small in size and brown in color. According to external data, the Alaskan Malamute is in many ways similar to the Siberian Husky. Also, these breeds have one more thing in common – they practically do not bark, and the sounds they make instead of barking resemble grunts. 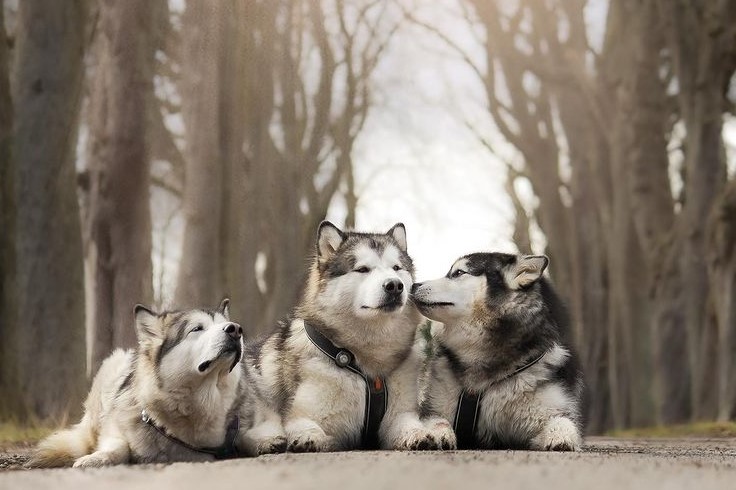 Malamutes are friendly and welcoming. They love to be active and in the spotlight. Therefore, pets are ideal for families with children. Dogs can take on the role of nanny or play companion. These pets are very loyal and love their owners very much. But in return, they demand the same strong feelings for themselves. Malamutes must not be locked in enclosures or kept on a leash. It is also unacceptable to leave the animal alone for a long time. Otherwise, the dog will become withdrawn, depressed and at some point will lose love for its owner, forever offended by him.

The fact is that this breed is not capable of getting attached and serving only one person forever. It is worth offending the dog and losing her respect, as she will switch her love and attention to another person. The Alaskan Malamute doesn’t like to do the same thing every day. If you ask him to serve slippers or a TV remote every day, he will soon perceive it as disrespect for himself and will be stubborn to reproduce the action. For this reason, novice dog breeders are advised against adopting this breed. The stubborn and intelligent pet is very proud and does not forgive mistakes.

These character traits of the animal interfere with its training and education. Although thanks to a high level of intelligence and curiosity, Malamutes are able to memorize all commands the first time. They will fulfill the owner’s request several times, but nothing more. It is important to understand that if the Malamute is bored with something, it is not worth continuing. Otherwise, the dog will lose interest in the training process in general. 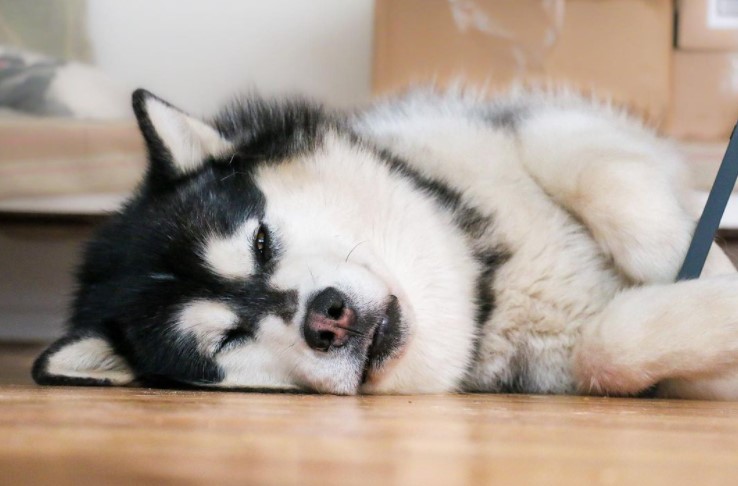 A noble pet needs careful care. As for bathing, these pets are very fond of water procedures. And since this animal has a thick and dense woolen cover, in the warm season, swimming in reservoirs is vital for it. When bathing your pet in the bathroom, you should use special shampoos. After the detergent, the pet’s hair must be rinsed with plenty of water. Otherwise, the cover will roll-off, and inflammation may form on the skin.

After bathing, the dog’s hair is dried with a hairdryer. During drying, the thick cover is gently combed out. Dogs are thoroughly combed during the molting period: in autumn and winter. The procedure is carried out daily. Otherwise, it is fraught with the formation of tangles and the presence of wool tubers throughout the house. Malamutes have long claws that sometimes need to be clipped. At least once a week, the pet’s eyes are wiped with a damp cotton pad. The dog’s ears also need monthly brushing. Discharge from the nose will indicate a cold or inflammatory process in the animal’s body. 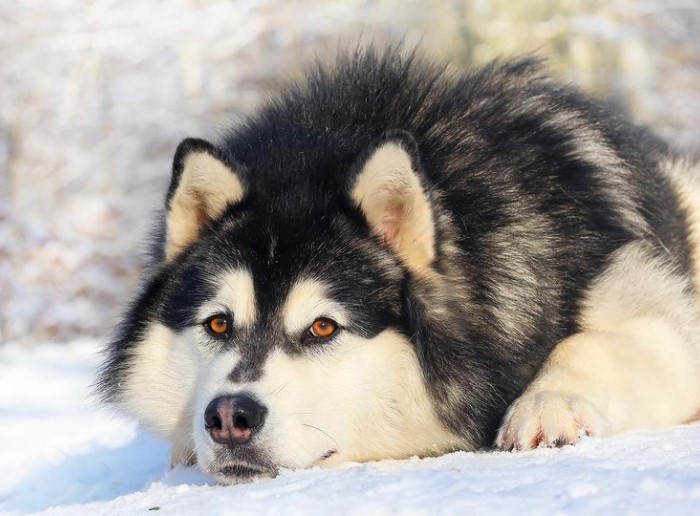 Common canine diseases that pets are prone to are most often related to genetics. Heredity can be miscalculated even before the birth of pets. Therefore, it is very important to buy Alaskan Malamute from professional breeders. So the first owner is obliged to report what diseases were manifested in the parents of the given litter, from which the puppies originated. In addition to this message, the breeder should give tips on the treatment of ailments.

A common problem in Malamutes is nose pigmentation. In common people, the disease is called – “snow nose”. An animal of this breed must have a black nose. If it acquires a pale pink color, then it’s time to take the dog to the doctor. Dogs with this symptom should not be exposed to the sun, as they probably lack protection from UV rays.

Another hereditary ailment is chondrodysplasia in Malamutes. The disease is accompanied by a disruption in the development of cartilage tissue. This leads to severe joint weakness. If you do not take timely treatment, a dog of this breed may stop running altogether.

Dysplasia must be reported by the breeder. The signs of such a disease appear incrementally: first, the dog refuses to walk, then stops moving around the house and lies all the time, stretching its paws forward. Noticing this, the pet is immediately taken to the veterinary clinic for examination.