They come in medium to large sizes. According to legend, they are descendants of the Cheshire Cat.

The British cat began to be in demand back in the 19th century. The breed was bred in England, crossing an English domestic cat with a Persian.

The British began to be shown at exhibitions as the first purebred cats, where they were recognized as the best. Then these animals were popular with aristocrats. Later, they began to be in demand not only in England but throughout the world.

Today, these cats have become so common that they are found in almost every home, regardless of the status of the owner, the great demand is due to their cute appearance, similar to a plush toy, and good adaptation to any conditions. 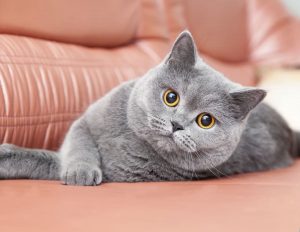 The head is a large, round, flat skull, wide cheekbones, and large, full, slightly drooping cheeks. The neck is short and strong, there is a pronounced skin fold around. The chin is well developed and firm, located in line with the upper lip and nose.

The nose is of medium length, wide, forming a depression at the transition to the forehead.

Ears of medium size, rounded at the tips, set low. The eyes are huge and round, widely spaced from each other, have a pure saturated color, the most common is bright orange, there are also blue and green.

The body is medium in size, closer to large, stocky, and massive, with a flat back and broad chest, the weight of the animal is from 4 to 6 kg. Legs are muscular, are short in length, round, and dense.

The tail is short, massive, thickened at the base, and gradually tapering towards the end. The coat is short, dense, thick, and resembles a plush, it is distinguished by the same length, a developed undercoat, an average degree of hardness, there is no snug fit to the body, therefore a poorly expressed hedgehog is formed on the body, the colors can be varied.

There is a variety of this breed – the British Longhair cat. She came from a cross between British and Persian cats. As a result of such experiments, short-haired representatives have a gene that is responsible for the development of elongated hair, but he is a weak and long-haired kitten that can appear only if both parents are carriers of this gene. The fur of cats with long hair does not need special care and does not fall off.

Some people mistakenly believe that there are British Fold cats. In fact, there are no such cats in nature. There is a breed of Scottish Fold, which is significantly different from the British. 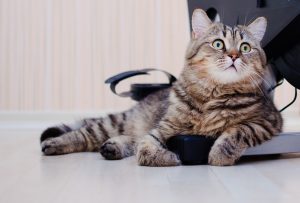 The British Shorthair cat has a complex personality. She is restrained, balanced, and calm, not very active, prefers the slow and calm flow of her usual life. With age, these cats begin to show qualities such as gravity and importance. They are not very attached to the owners, strangers are shunned. For them, personal space is important, sometimes these animals can hide in a secluded corner, wanting to be alone with themselves.

These cats do not accept abundant manifestations of love, excessive attention from a person, they do not tolerate being carried on their hands and constant gripping. The character of such pets is distinguished by leadership qualities. They do not like closed doors, perceiving them as an obstacle in their path, and begin to meow indignantly.

These animals are good family men and loafers. They get used to all family members, and not to just one, perceiving the household as the herd of which they are apart. They also find a language with other pets, including dogs, and are not jealous. Their character largely depends on the atmosphere in the house: if it is calm, then the cat will be friendly, and if the situation is nervous, then the cat can become aggressive. By nature, these pets often resemble their owner.

The British are distinguished by their aristocratic manners, which are inherited, they will never spoil anything. They are clean and well-mannered, so there are no problems with the tray and scratching post. These animals will always find something to their liking, but, despite their independence, in the absence of their owners, they miss them, and upon their return, they greet them with tenderness and purr.

The British Shorthair cat is unpretentious in its care, which is limited to a few standard procedures. Once a week, the coat requires brushing using rubber brushes, if this is not done, then the thick cover can fall off, forming tangles. During the period of active molting, this procedure must be done every two days. It is recommended to bathe these animals no more than twice a year, they do not like water. As it gets dirty, you should clean your ears and eyes using a damp cotton pad. Also, to avoid the formation of tartar, the pet needs to do regular brushing of its teeth or give a special food that removes plaque. No less important is the timely vaccination and deworming.

These cats are prone to obesity, which can subsequently cause various diseases. Therefore, the owner must monitor the pet’s diet and the amount of food consumed. It is better not to give food from the table, especially the sweeter, fatty, and starchy.

A good option is dry and soft food of at least premium class. The consumption rate is usually written on the packaging. A kitten under 6 months of age is fed 3 times a day, an adult cat – 2.

When compiling a diet from natural products, you can focus on low-fat beef, vegetables, dairy products, cereals, and vegetables. It is better to cut the meat into pieces so that the animal chewing them develops its jaws and cheeks. It is advisable to add the intake of vitamin complexes.

About two hundred colors of British cats are recognized. The most popular of these are blue. But other colors are also in demand. 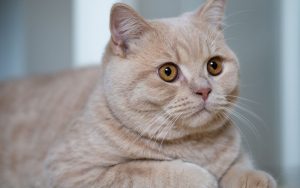 The most common British colors are:

-solid or monochromatic – an important criterion for this color is the uniform staining of each hair from root to tip in one color, there are colors of lilac, blue, black, chocolate, and red shades;

– tortoiseshell – a combination of several shades;

-smoky – the hairs are up to half painted white, and the upper part – in the main;
chinchilla – only the tips of the hairs get the color, and the undercoat is white;

-bicolor – white color is combined with the main one;

-tubby – a silver or gold shade with a different pattern (marble, ticked, striped)