Greyhounds are English Hounds. According to their external characteristics, these pets seem to be gentle and graceful. However, these are strong and very hardy dogs. Great Britain is considered their homeland and the ancestors of pets were known even before our era. Used animals as hunting dogs.

Greyhounds have not yet used up their abilities and are known as the best fox and hare hunters. In addition, pets often participate in running competitions due to their ability to develop good speed. 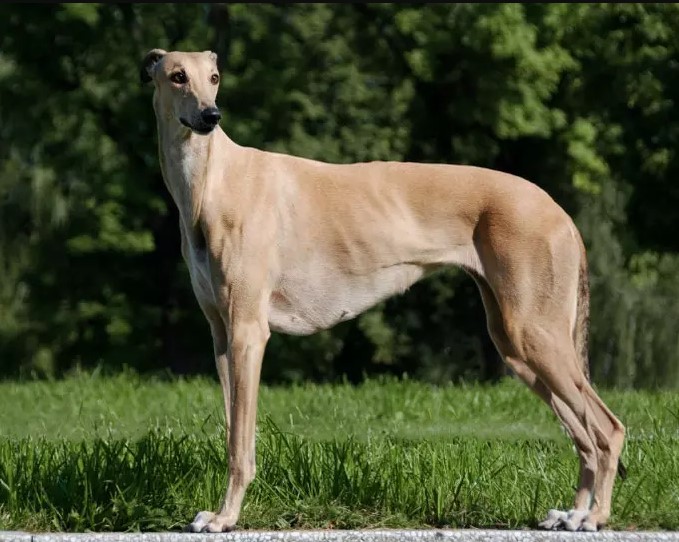 These pets are quite large in size. The breed standard is recognized in the following description:

The Greyhound’s coat is thin but thick. It is short in length. The color of the coat can be very different: white, red, gray, black, fawn, brindle, combined. 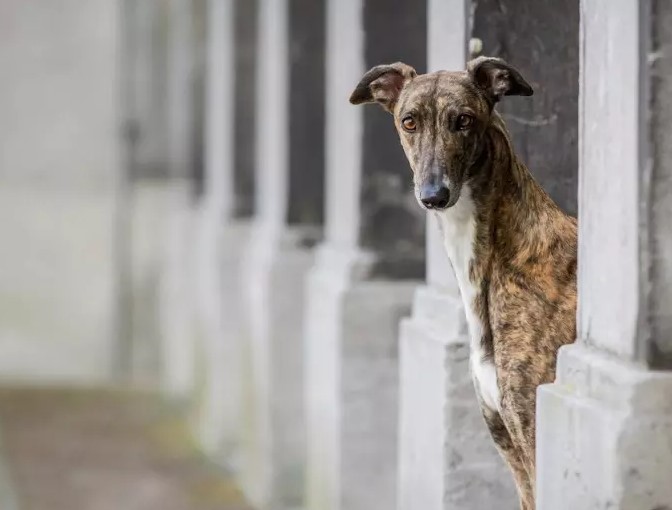 Today it is difficult to determine exactly when the Greyhounds were born. But scientists have found the remains of very similar dogs that existed on earth more than 2 thousand years ago. In addition to bones in the ground, Egyptian archaeologists have found ancient caves with images of dogs similar to English Greyhounds. Some of the same were at one time found in the sarcophagi of the pharaohs.

In ancient times, the ancestors of today’s Greyhounds were actively used in hunting deer, roe deer, and hares. Later, pets began to spread in the territories of Rome and Greece. Traders and merchants brought them there. The dog was brought to Britain by the Celts. It was around the 5th century. In the shortest possible time, these pets became the favorites of the local nobility. Soon the Hounds were crossed with other dogs (Old English Bulldog and others). So a new breed appeared – the Greyhound. After that, from the new species, others began to appear – Deerhound, Great Dane, Irish Wolfhound, Whippet. 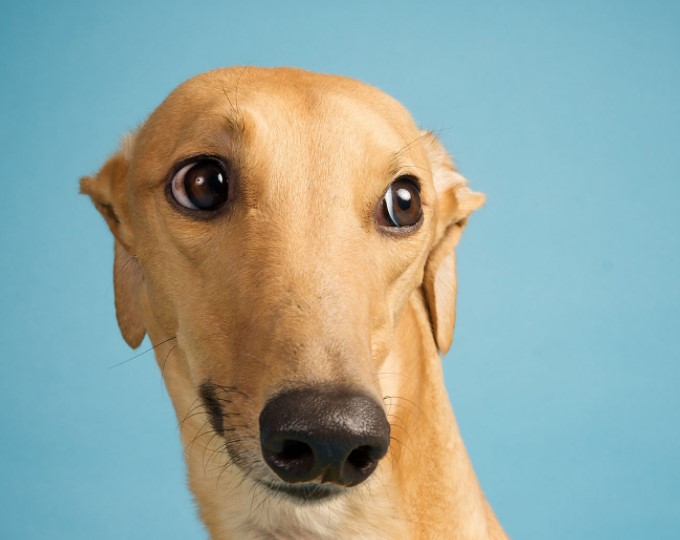 Dogs of ancient blood are very good-natured. They get along well with all family members, they are happy to play with small children. In relation to them, dogs are quite tolerant. In particular, females show their love for small children. They are affectionate with babies and are ready to look after them.

Some breeders accuse dogs of restlessness, but this is a myth. Almost all Greyhounds are patient and level-headed. Being at home, they will be happy to wait for the owner to free himself and pay attention to him. In this case, the animal will behave calmly and observantly. If a pet from childhood is not taught to run and hunt regularly, then this instinct may not even appear in him. In general, the pet can be called a little lazy. The pet will happily stay at home in cold weather and will prefer a cozy sofa to a damp street.

Greyhounds are very well-mannered and restrained in manners. They rarely bark and are not prone to damage to household items. They are obedient animals. If you do not socialize your pet from early childhood, then on walks he will definitely go after the cat. This is the only disadvantage in the behavior of the Greyhound, which is easily removed by proper upbringing.

Dog training begins with building a relationship of trust between student and teacher. This is not difficult, as this pet never tries to dominate. From early childhood, the dog is taught simple rules, explaining to it what is allowed and what is not. Greyhounds love praise. Also, during classes, you can encourage the correct completion of tasks with a treat (cookies, cheese, nuts). 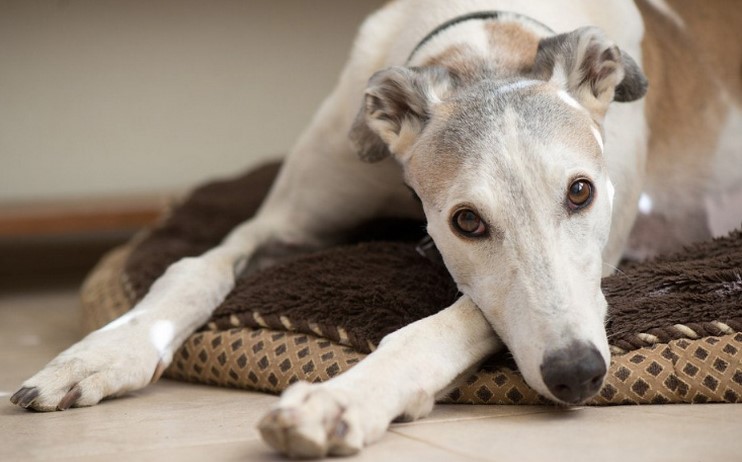 Greyhound is unpretentious in leaving. The pet’s coat is smooth and short. It is combed out every 3-4 days with a rubber glove. Greyhounds are rarely bathed and mostly if there is a reason. After each walk, the animal’s paws are washed. If the dog goes hunting, then after the event he also needs to arrange water procedures. Greyhound’s nails need to be trimmed periodically using a nail clipper, or by contacting a specialist. They are trained to care procedures from the first months. So, he will calmly perceive the cleaning of his ears, teeth, eyes.

The best activity for a dog is walking in parks, fields, and forests, away from noisy highways. In crowded places, even a well-bred pet should not be let off the leash. Instincts can appear suddenly and then trouble will happen. A bike ride (when the owner rides the bike and the dog follows him) would be a good option for walking. The dog will also be happy to accompany its owner in a regular sports run in the morning or evening. 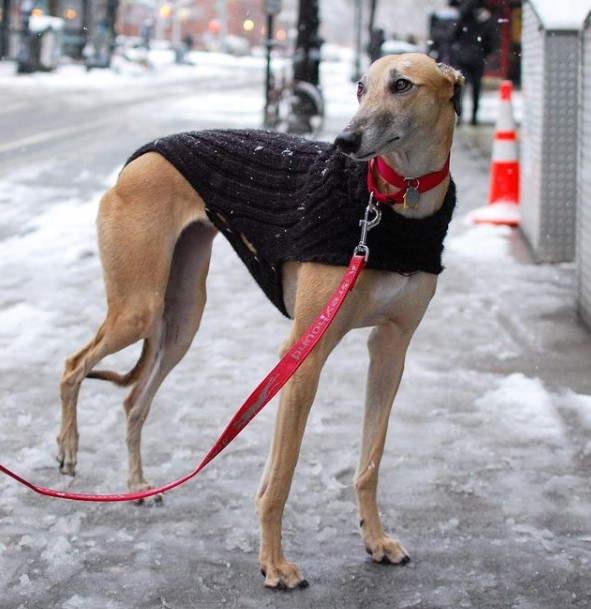 These dogs are hardy and strong in matters of health, but they have a predisposition to some ailments. Namely to:

Pets are prone to drug allergies. Dogs do not recover well from anesthesia. This is important to know before spaying an animal. Greyhounds need timely vaccination against common ailments, prevention from external parasites and worms. 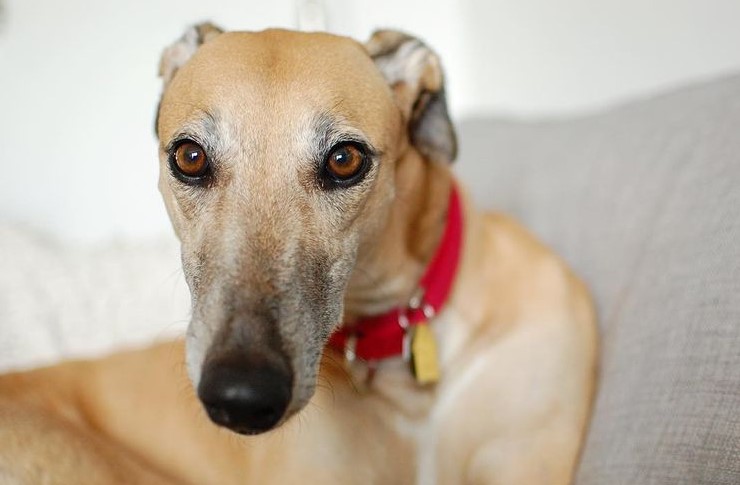 This pet is ideal for active people. But in a calm family, the dog will also take root, if only they pay attention to it. Greyhound gets along well with all household members, is not dangerous for children. The dog should be prepared for other animals in the house, and undergo a socialization course. Greyhound is a kind, gentle and intelligent dog who can become the best friend of a lifetime!