The Himalayan cat is the case when the name of the breed does not reflect the origin in any way. The name comes from the rabbits of the Himalayan breed because of the similar color. 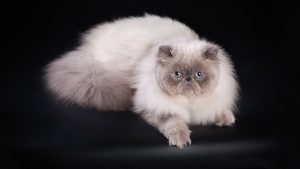 The history of the Himalayan breed dates back to the 50s of the last century in America. After 10 years, he was recognized as independent, but not for long. In parallel with this, long-haired colorpoints were bred in Great Britain, which outwardly differed from the Himalayan in color intensity and a more elongated muzzle. They exist to this day but have never been a separate breed.

Himalayan cats, like the Persians, are a very calm and peaceful breed. Pets will be happy to lie on the couch or in your lap.

Like any long-haired cat, the Himalayan requires increased attention to grooming. It is combed in three steps: first with a comb with rare teeth to straighten the strands of a thick cover, and then even more often to remove dead hairs. At the very end, they begin to comb with a natural bristle brush, from which the wool fluffs up and takes on an exhibition look.

Animals find it difficult to tolerate being in a confined space, so they should be given the maximum possible freedom of movement around the house. Cats with a pronounced flattened muzzle (“Pekingese face”) often have problems with tearing.

The eyes of Himalayan cats and kittens should be examined regularly and, if necessary, wipe with a damp cloth. Due to the special structure of the skull under the eyes of the Himalayas, if care is ignored, wool and secretions begin to accumulate.

Because pets have thick coats, hairballs (balls) accumulate in the stomach when they lick. To prevent the belching of hairballs, cats can be given petroleum jelly.

The color-point color is fully formed in two or three years. All of us familiar “Siamese” color, it turns out, is the result of a CRO melanism – incomplete albinism, when the color of the coat depends on the body temperature of the animal: where it is warmer, less pigment is produced, and vice versa.