Due to the external similarity, many people think that the Sheltie is a dwarf Collie, but they are wrong. They are two different breeds, despite the fact that at one time their paths were really intertwined. The Shelties are very intelligent, loyal, and friendly, small in size with good looks that require regular but not difficult grooming. Thanks to these qualities, the breed is very popular today as a family companion dog. Another name is Shetland Sheepdogs. 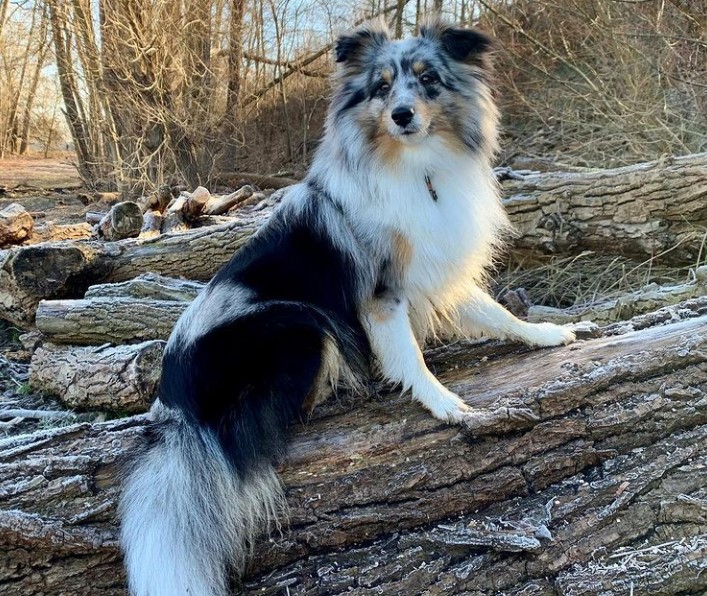 The ancestors of the modern Sheltie are native to the Shetland Islands, the northernmost territory of the United Kingdom. Presumably, they appeared due to the crossing of local Spitz, Border Collie, and other Scottish Shepherd Dogs. The modern type was formed by the end of the 19th century. The resemblance to a Collie is worth mentioning separately. Seeing that the dogs were similar, British breeders began to purposefully create a miniature copy of their favorite breed, rather than focusing on the original qualities. At the turn of the 19th and 20th centuries, as well as after the Second World War, the Shelties even infused the blood of Scottish Shepherds.

In the 20th century, Shetland Sheepdogs, as shepherds, were no longer needed, but the breed was preserved through the efforts of enthusiasts, who saw them as companions. In 1908, a breed club was created in Lerwick, the capital of the Shetland Islands, breeders made an attempt to unify the breed: they called it the Shetland Sheepdog, started herd books, and developed a standard. In 1909 the breed club was founded in Scotland, and in 1914 in England. In 1917, the first dog named Woodwold received the champion title. In the subsequent war and post-war years, there were practically no pedigree dogs in Europe. It was only in 1948 that the various English Kennel clubs jointly re-established the population, agreed, and adopted the standard.

Particularly noteworthy are the Sheltie lines in the United States. The first Shetland Sheepdogs were imported to the States from England at the beginning of the twentieth century. Purposeful breeding and improvement work began in the 1920s. Breeders led by Frederick Fry founded the American Sheltie Association and in 1929 the AKC registered the first standard. 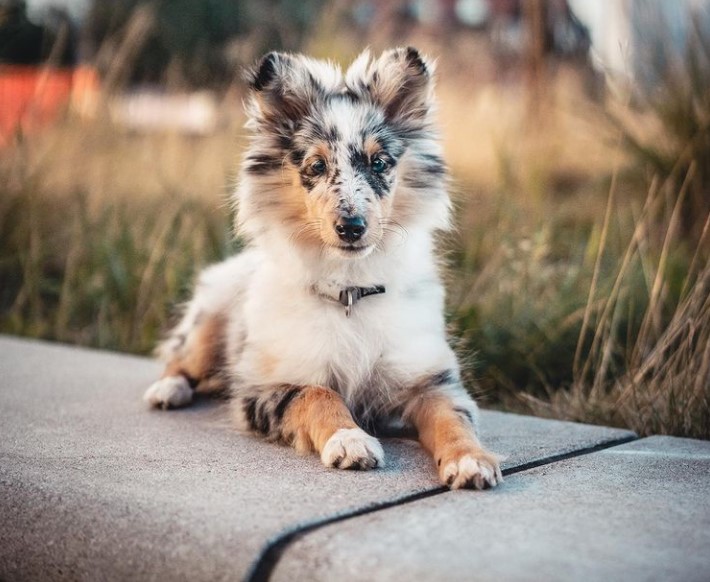 Shetland Sheepdogs are small working type dogs, strong and balanced with a lush long coat, an elongated muzzle, and an intelligent, expressive look. The movements are smooth, graceful, good drive of the hind limbs allows them to cover a large space with minimal effort. Average height 30-40 cm, weight 8-12 kg.

The head has the shape of an elongated blunt wedge, tapering towards the nose. The occipital protuberance is poorly expressed. The stop is slight but noticeable. The nose, lips, eyelids are black. The teeth are small, strong, complete with the correct bite. The eyes are almond-shaped, of medium size, set slightly obliquely. The color of the iris is dark brown. In merle dogs, the eye color can be blue and blue with brown stains. Ears located close to each other, small, semi-erect, rounded corners bent forward.

Sheltie hulls are slightly stretched out. The chest is deep. The neck is well-muscled, sufficiently long, and well arched. The back is straight. The loin is slightly arched. The croup is moderately sloping. The limbs are strong, in proportion with strong bones and well-developed muscles. The tail is set low, reaching the length of the hocks.

The double coat of the Sheltie consists of a tough, long, straight awn and a soft, dense, short undercoat. A lush mane and collar serve as a noticeable decoration, limbs and tail are well pubescent. The hair on the muzzle is always short. Many colors are allowed, for convenience, they are divided into groups:

The presence of white spots is allowed on the face, chest, paws; on the body, they are highly undesirable. 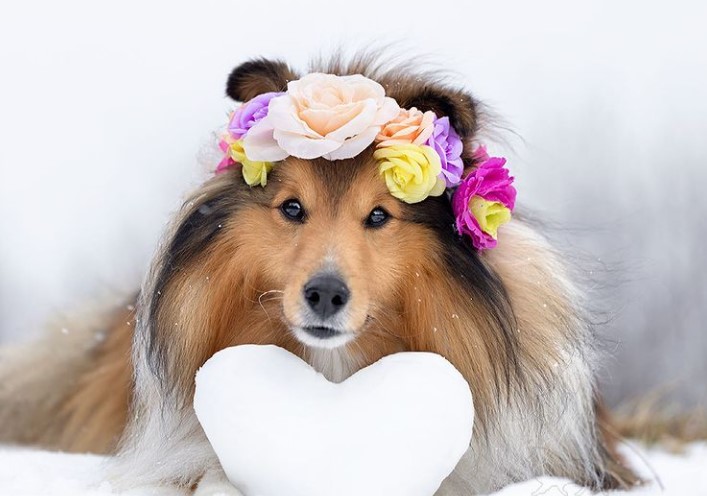 Shetland Sheepdog is a small personality with a very gentle, docile, and friendly character. These dogs are very loyal and loyal to the owner. They absolutely cannot stand loneliness and indifference, and therefore everywhere they will follow the person on the heels and rejoice at any opportunity to spend time together. Self-esteem, independence, and delicacy are innate qualities. Shelties will not be annoyed if the owner is busy, but are always ready to join the game. Children are treated with affection and endless patience.

In relations with outsiders, they are usually reserved. Cowardice, nervousness, or aggression are unacceptable qualities for the breed. As a defender of the Sheltie should not be considered, but dogs have protective qualities and will always warn about the danger with loud barking. Shelties are very talkative, but their language is not limited to just “woof”, it is surprisingly diverse. Dogs can squeal, grumble, moan, whine, purr, and even howl restlessly. They even bark with different intonations.

Features of Maintenance and Care 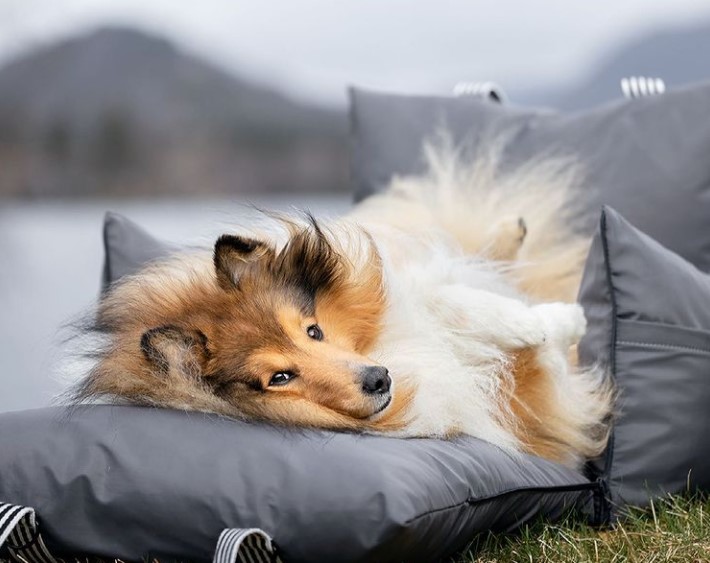 Sheltie should live next to her family, no matter where in a small apartment or a spacious private house. The breed is not suitable for outdoor keeping. The dog easily adapts to any lifestyle. He can sit on the couch for hours without suffering from idleness, and on the street, he will enjoy the opportunity to run and play. Shelties are very sociable, they get along well with any other animals, be it a cat, a dog, or a hamster. If the dog does not have the opportunity to spend all of its accumulated energy, over time it can become nervous, hyperactive, or destructive.

Caring for a long-haired breed will require a lot of time and material costs from the owner for all kinds of tools and cosmetics. Especially carefully you will have to take care of a rich fur coat if the dog lives in an apartment.

Shelties have an elusive charm and harmony. If you take care of your pet correctly and regularly, it will attract a lot of admiring eyes.

It is recommended to comb the wool up to 3 times a week. Every day during the period of intense seasonal molting. The dog is bathed once a month. Use mild shampoos for long-haired breeds, after washing, be sure to apply balms and conditioners, which make the hair heavier and facilitate combing. 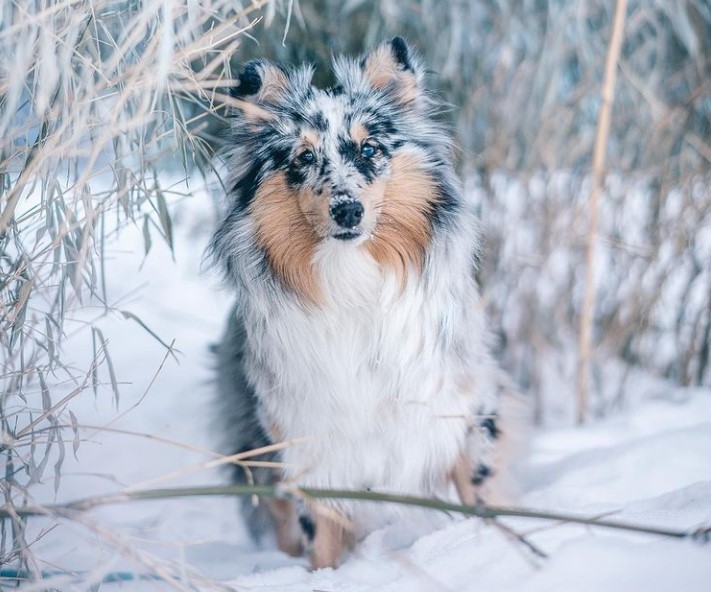 Shelties are very hardy and adapt well to various weather conditions. In most cases, Shetland Sheepdogs are distinguished by good health and good immunity, and their average life expectancy is 12-13 years. Meanwhile, a number of diseases are distinguished in the breed, to which it is predisposed: