Vizsla is a dog with excellent working qualities and a harmonious appearance. The development of the breed goes back several centuries. During this time, the dog became not only an excellent hunter but also an excellent companion. The dog is friendly and open to human relationships. Without attracting the dog to the hunt, Vizsla must definitely receive other physical activity in return. 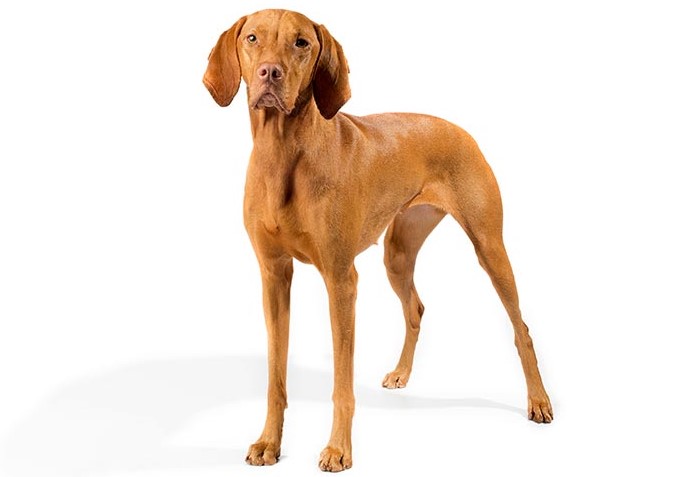 Walking indifferently near Vizsla will hardly work. Her looks are eye-catching – she is elegant and strong at the same time. Her whole body is very proportional. The height of an adult male at the withers can reach 64 cm. The dog has an aristocratic appearance and golden hair.
Characteristics of the exterior of the breed:

The Vizsla is a smooth-haired dog. The coat of wool covers its body in a dense layer. The hair is hard. No undercoat. The hair on the head and ears is softer and shorter than on the body. At the tip of the tail, the hair is noticeably longer. There is less hair on the belly than on the back. Vizsla can be of any shade of red: from wheat to golden with a red overflow. The ears are slightly darker than the head. There may be one white spot on the chest and small markings on the ends of the legs. 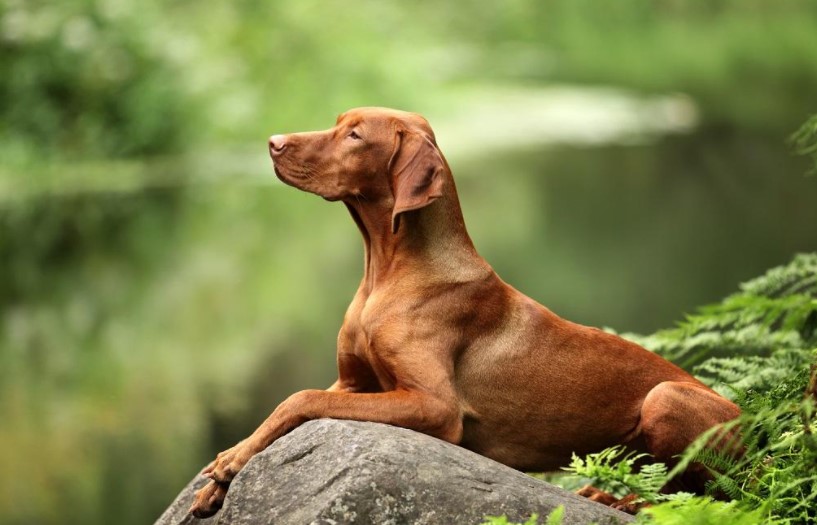 The direct ancestors of Vizsla have been known since the tenth century. They lived in settlements at the base of the Hungarian Carpathians. Further, in the Vienna chronicle of 1375, dogs of a characteristic appearance were described, which were excellent hunters of hares and small animals. The writings of those times praised the working qualities and outward beauty of the ancestors of the modern Vizsla. Over time, the Vizsla has become a versatile dog that works equally well in meadows, swamps, and forests. The dog became a descendant of several breeds of hunting dogs in England and Germany. Some historians are sure that Hounds (a breed of Saluki) from Arab countries took part in the selection of the breed.

As a result, the Vizsla combines excellent hunting dog flair, high intelligence, and endurance. In the Middle Ages, such a dog was especially valuable. Perhaps thanks to this, the breed has retained its external and working qualities for several centuries.

The history of the modern breed began in 1825. From this period, the breeders of the Vizsla began to record information about the offspring, keep records of dogs within the breed, and keep the pedigree of animals. It is this year that is considered the year of the origin of the breed in its native lands. The dogs received worldwide recognition much later when the laws of Hungary lifted the ban on the export of thoroughbred outside the country. 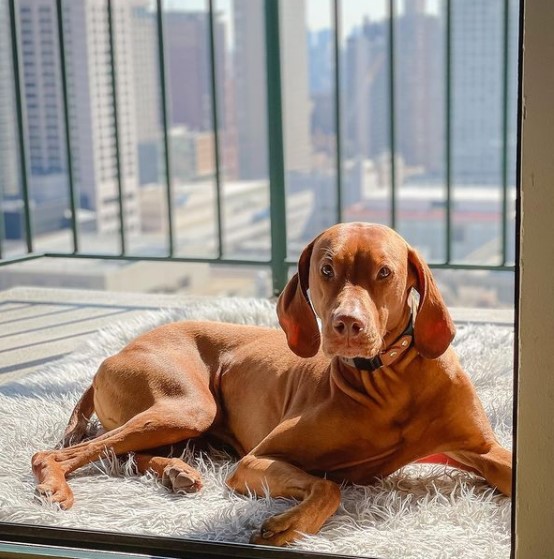 For several centuries in a row, the Vizsla has lived next to humans. Thanks to this, the representatives of the breed have learned to communicate with people, have become good companions. Now the need for breeding hunting dogs has decreased significantly, and the Vizsla has not lost its popularity. She became a family member, a loyal friend. Living alone indoors is not acceptable for this breed of dog. They are too attached to the owner and yearn from the first minutes of loneliness. Vizsla sincerely trusts and loves the owner. Not all hunting dogs are capable of such feelings.

The most amazing thing is that the dog is friendly not only to the owner but also to those people whom its owner trusts. She easily gets to know the guests, and from the very first minute, she shows sincere interest. This feature does not allow the use of the Vizsla as a guard. The dog is not aggressive and too trusting. The only way the animal can help the owner, as a guard, is to notify him with a voice about the arrival of strangers or an alarming situation.

The dog experiences incredible positive emotions at the moment when the owner returns home from work. Not all dogs are capable of such feelings. Moreover, the time a person is away from home does not really matter. The dog always jumps affably, wags its tail, and squeals. Vizsla can be an excellent nanny for a child of any age. The dog is patient and not embittered. Children quickly find a common language with representatives of this breed, involve them in their games. Dogs, in turn, are happy with this pastime. Due to the high level of tolerance and the absolute absence of aggression, Vizsla is used in a therapy program for sick children. Dogs do this role well. 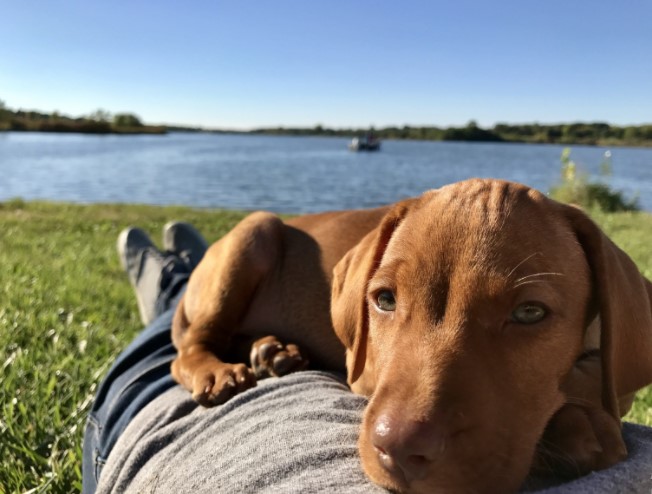 Vizsla is unpretentious in care. The short, dense coat does not need to be combed out for a long time. Only during the season of shedding is it necessary to clean the dog from old hair. To do this, use a brush with thick metal bristles or a special mitten. If there is no active molt, then you can comb the dog 3-4 times a month. It is necessary to bathe the dog as it gets dirty, but not more than twice a month. In the summertime, you need to give your pet a swim in open water. This is the natural need of the animal. After active walks, it is enough to wipe the dog’s body with a damp cloth to get rid of surface dirt.

By nature, the Vizsla is very clean. A dog can lick herself for hours. At the same time, the skin and coat of the dog do not have a characteristic odor. It is important to monitor the condition of your pet’s teeth. They should be cleaned to prevent plaque and tartar buildup. The procedure is performed once a week. At your veterinary store or drug store, you can find a special brush and dentifrice.

If the dog runs on the ground long enough, the nails will wear off naturally. In cases where they are not ground, they should be trimmed. Particular attention should be paid to the condition of the ears and eyes of the pet. They need to be kept clean and checked for infections. 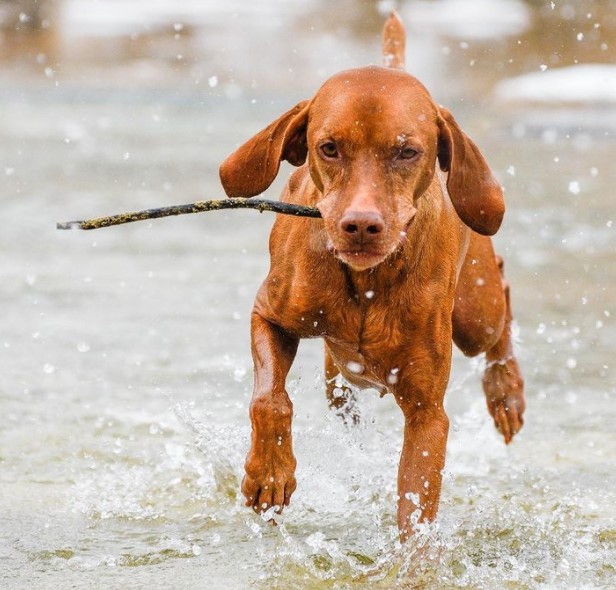 The Vizsla belongs to dogs with good health by nature. Her life expectancy can be 14 years. But even these dogs have a number of diseases, the likelihood of which is quite high:

The owner must protect the dog from possible injury and prevent the development of serious diseases. For this, it is important to periodically bring the animal for a preventive examination to the veterinarian, give antihelminthic drugs in time, and vaccinate the animal. 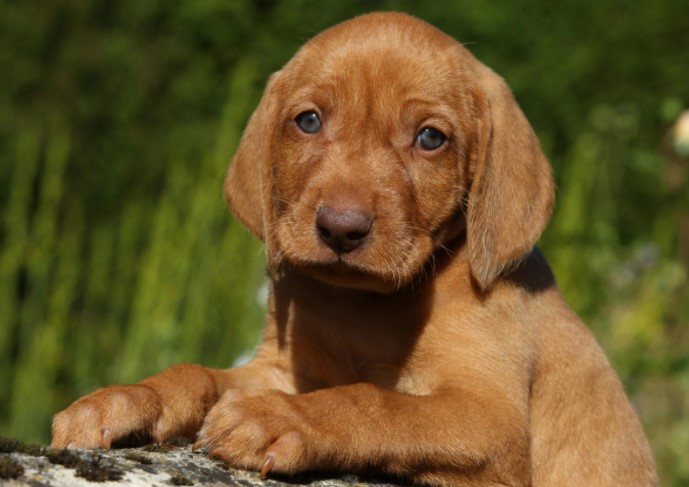 The Vizsla is not only a good hunter but also an excellent companion. The dog is famous for her docile nature and a complete lack of aggression. The dog can live without hunting, but the owner must provide him with sufficient physical activity and long walking in the air. Despite the docility of character, the Vizsla needs training.