The name of this shrimp is immortalized by the name of the famous Japanese designer and aquascaper Takashi Amano, who actively used this crustacean to fight algae in his masterpiece aquariums. A group of such shrimps is able to clear a large aquarium of unwanted lower plants in a matter of days. In our article, we will consider the issues of comfortable keeping of this “algae-eating shrimp”.

The Amano shrimp (Caridina multidentata) is a popular aquarium shrimp that is of great benefit to aquarists by killing various types of algae. The only exceptions are red ones (for example, “black beard”), but active shrimp prevents their appearance.

Shrimps are easy to care for, peaceful, and large enough to fit even in a large aquarium. The disadvantages of this species are difficulties with breeding, the need to keep in large flocks, and the ability to take food from fish.

Amano shrimps have a typical shrimp body shape. Body-color does not differ in brightness and mostly depends on the diet of the shrimp. If the basis of food is plant food, then the color will be light green, otherwise, the shrimp will be transparent or slightly reddish. A golden strip runs along the upper part of adults. Small spots or streaks are scattered over the body. They are an important trait to determine gender. If the drawing consists of dots, then we have a male in front of us, if from strokes – a female.

Females are almost twice as large as males and reach a size of 7 cm. 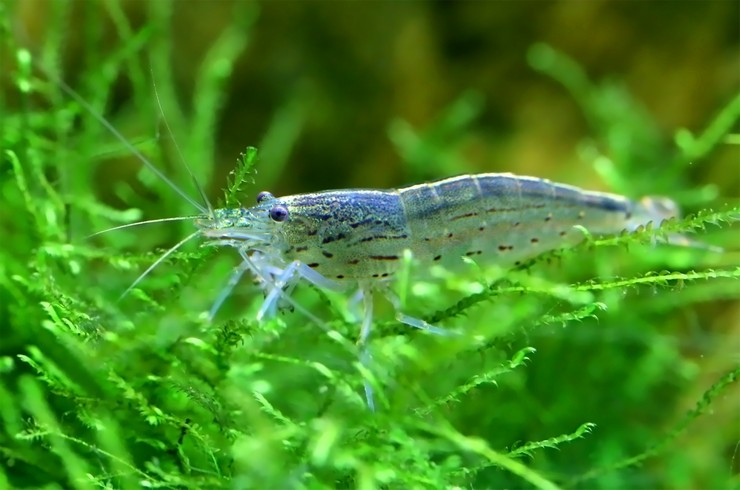 The natural range of Amano Shrimp includes the central regions of Japan. Crustaceans prefer cool mountain rivers with strong currents. Shrimp live in large flocks, some of which can number several hundred individuals. It was also found in Korea and on about. Taiwan.

Keeping Amano shrimp in a home aquarium is easy. These peaceful and unpretentious “crustaceans” will be a good choice for novice aquarists. Excessive fearfulness is not typical for Amano shrimps, they like to constantly actively swim and study the ground, scenery, and everything that surrounds them for food. 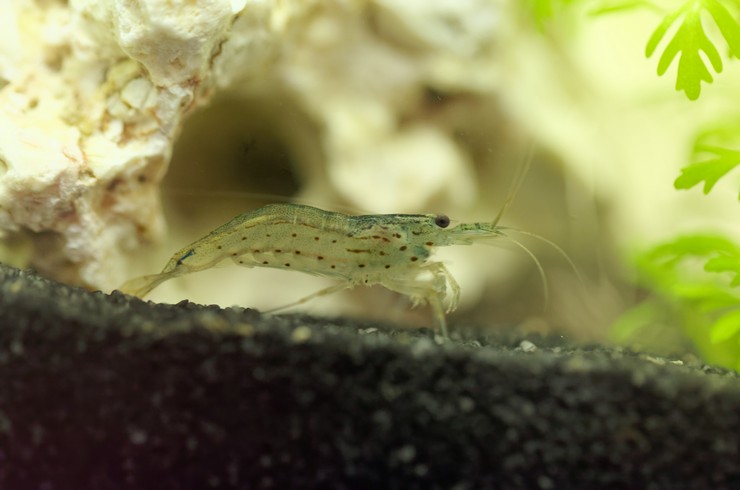 The volume of the Amano shrimp tank is selected depending on their quantity. It is recommended that there be at least 5 liters of water per animal. The aquarium should have a lid and all large technological openings closed to avoid accidental pets. It is worth noting that Amano shrimps are great at climbing hoses and pipes.

It is best to keep shrimp in groups of 10 or more. Any soil suitable for growing living plants can be used: sand, small pebbles, highly porous soil made of special clay Tetra ActiveSubstrate. Give your shrimp plenty of shelter from small-leaved plants, driftwood, plastic tubing. 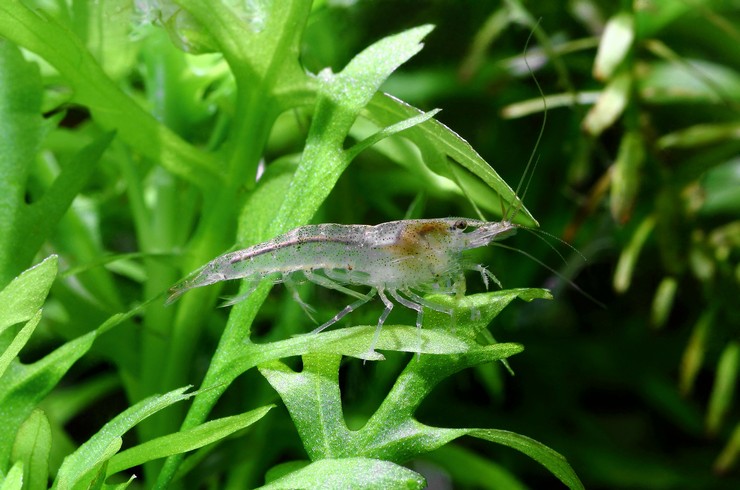 Amano shrimp are sensitive to nitrogenous compounds in water. Therefore, high-quality filtration and aeration is the first thing to take care of. As in their natural habitats, they like to swim against the current created by the filter.

Amano shrimp are quite unpretentious. They are not so shy, they get along well with all small peaceful fish. They instantly hide from especially active inhabitants. The crustaceans themselves are completely safe for other inhabitants, they do not touch either eggs or fish fry.

Up to 20% of the aquarium volume is changed weekly. Like other aquarium crustaceans, Amano shrimp do not tolerate high copper content.

Amano shrimp are completely peaceful creatures that are great for keeping in communal aquariums with peaceful fish species. As neighbors, you can choose cockerels, gourami, barbs, viviparous fish. They get along well with calm catfish: corridors and ancistrus.

Since shrimps are not large in size, keeping them with large fish or predators is strongly discouraged so that “crustaceans” do not become their prey. Even relatively calm scalars will not mind eating young shrimps.

When kept with peaceful fish, you can sometimes observe how funny the Amano shrimp take food from each other and from the fish. 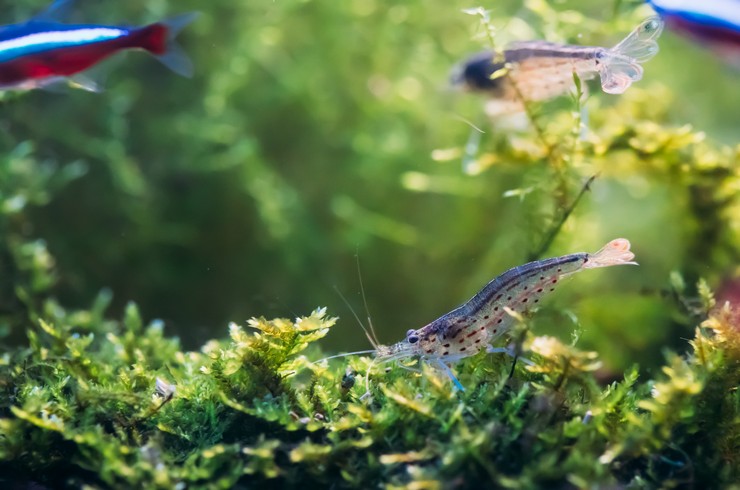 Like many relatives, the Amano shrimp is an omnivorous aquatic inhabitant. The basis of her diet is algae, detritus, fish food residues. Most crustaceans prefer soft algae and filamentous. 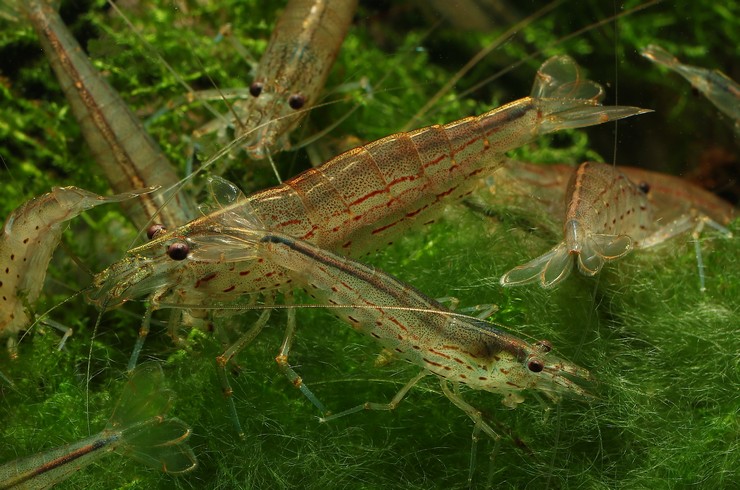 If there are little algae and organic debris in the aquarium, then the shrimp must be fed with specialized shrimp feed. The Tetra Crusta range is a good choice. These complete feeds contain selected proteins, as well as enriched with plant components and vitamins. You can choose the shape of sinking sticks or granules, the special structure of which does not pollute the water. You can also use the universal feed in the form of thin sinking plates – Tetra WaferMix. It contains the algae spirulina to increase the body’s resistance to disease.

It is not recommended to feed Amano shrimp with live or frozen food: they are not balanced and can become a source of infection in the aquarium.

Breeding Amano shrimp at home is not difficult, but it has its own nuances. The fact is that shrimp larvae develop not in fresh but in saltwater. Therefore, if you have set yourself the task of obtaining offspring, then prepare a separate spawning aquarium in advance. Breeding in a common aquarium is unlikely to be successful: you cannot increase the salinity of the water, since many fish cannot tolerate this, and the young can be eaten by neighbors in the aquarium.

When female Amano shrimps are ready for spawning, transparent egg sacs can be found under their tails, in which future eggs will be stored. Mature females release pheromones into the water, special chemicals that attract males. Under their influence, males begin to climb onto females and fertilize eggs. Several males are often involved in the fertilization of one female.

After two days, dark green caviar sinks into the egg sacs. The fecundity of a female can be up to 1000 eggs. Bearing lasts 4-5 weeks. At this time, the females’ behavior changes: they try to hide in the thickets of plants, are very shy and careful. And this is the best time to plant the female in a separate aquarium. 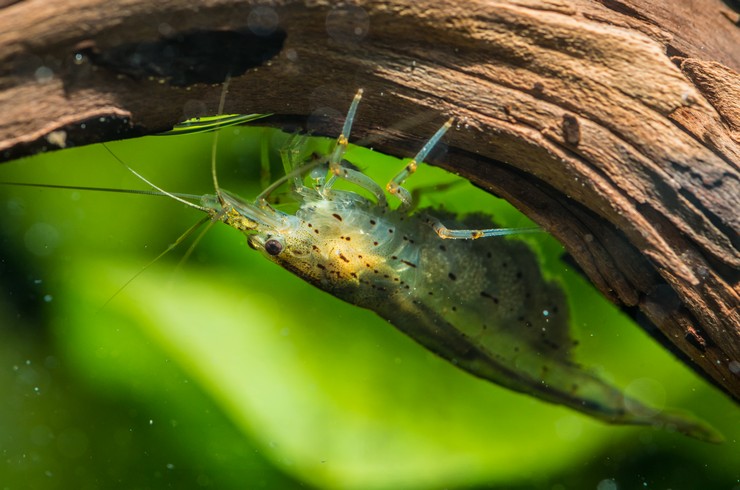 It is best to replant females at night. Shrimp have positive phototaxis, meaning they react to light and move towards it. For catching, a flashlight beam is directed to the aquarium, the shrimp is driven into a corner and caught with a fine-pored net.

Under suitable conditions, caviar develops for about a month. At the same time, the eggs change their color from dark green to lighter. Before the birth of the embryo, eyes can be seen in the eggs. After the larvae hatch, the female is deposited back into the general aquarium.

From this point on, the water in the spawning aquarium must be salted. To do this, you will need not table salt, but a special one intended for marine aquariums. It can be purchased at pet stores. The recommended water salinity is 35 g / l. To measure salinity, a special device is used – a hydrometer. It is better to keep the temperature for larvae at the level of 20-22 ° С.

The larvae grow rapidly, after about 2-3 weeks they begin to transform into adult shrimp. During this period, the salinity gradually decreases by 2 times, to 17 g / l. Once a week, you need to change 30% of the water to fresh.

Two months after hatching, the young shrimp are ready to be transplanted into a freshwater aquarium. For everything to go smoothly, an hour before the proposed operation, it is necessary to replace 50% of the saltwater in the spawning box with fresh water.