In difficult natural conditions, fish develop a variety of adaptations that increase the chances of survival. These can be changes in the structure of the body, the appearance of special organs, or special behavioral reactions. Creeper fish (climbing perch) is a prime example of this.

Anabas, or creeper fish (Anabas testudineus) – a representative of the creeper family, belongs to the group of labyrinth fish. A distinctive feature of the climbing perch is the presence of a labyrinth organ, thanks to which the fish are able to use atmospheric air for breathing. 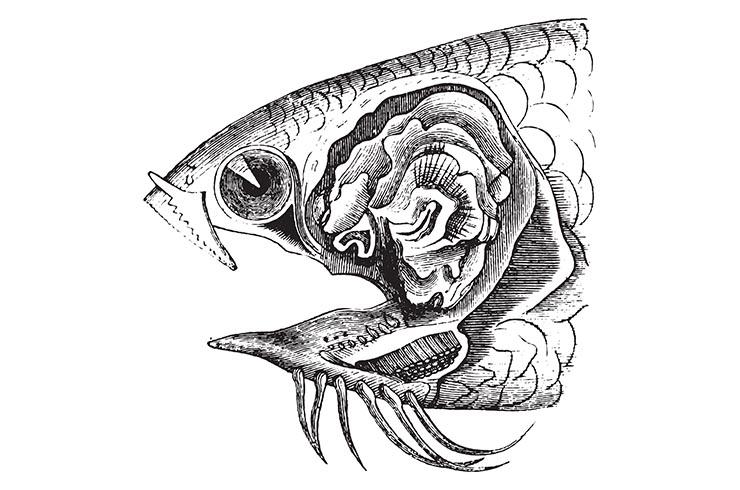 In the process of evolution, fish have acquired one amazing ability. Fleeing from drought, when the reservoir is shallowed, they can easily go on a journey across the land in search of a more humid territory. To do this, they use their pectoral fins, which raise the body above the ground, and their tail, which helps to push off, as well as special gill spines. Often, fish are able to climb even low trees. The very name of the genus “anabas” is translated from the Malay language as “dart frogfish”. 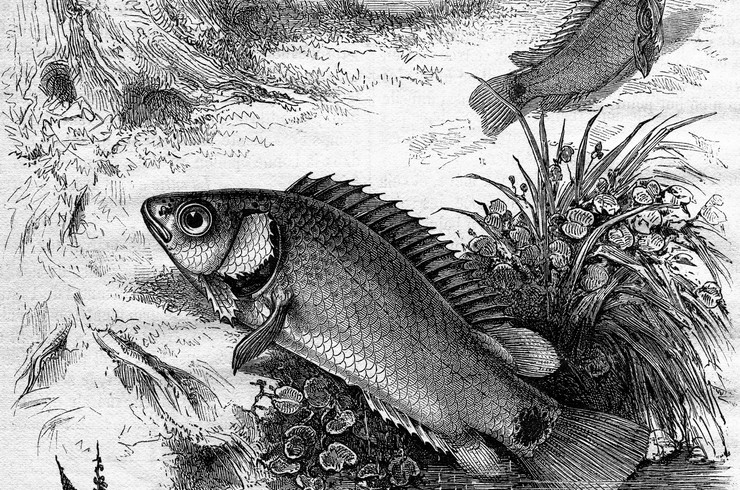 The massive movement of the climbing perches in search of more suitable conditions is an amazing sight. True, during this period they become vulnerable and become easy prey for natural enemies – birds, as well as local fishermen who catch fish with almost their bare hands. The climbing speed is low and reaches about 100 m / h. Fish move mainly at night. 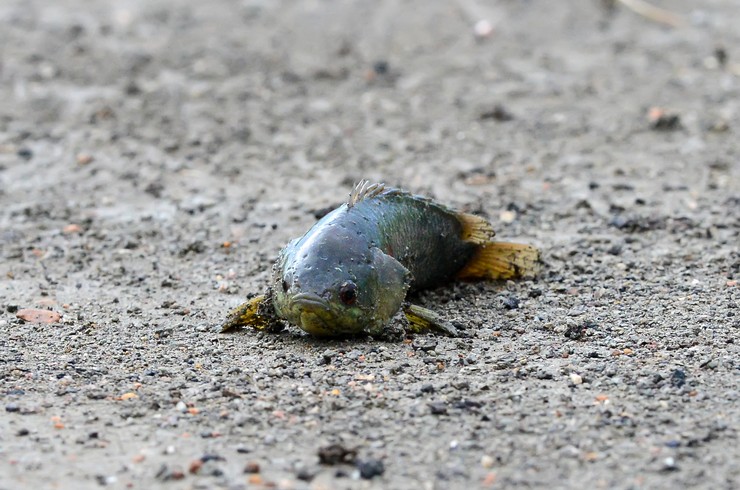 If it is impossible to migrate, the climbing perches dig holes with their snouts in wet silt, where they survive unfavorable conditions. The depth of such pits can be 50-100 cm. Locals often collect buried individuals, digging their holes and hook them. Therefore, it is not surprising to meet an Indian going fishing with a shovel and a hook.

In the absence of direct sunlight, climbers can live up to 8 hours without water at all, a labyrinth organ helps them in this. This is often used by magicians, “reviving the dead fish” and forcing it to crawl on the ground.

In the aquarium, the fish is poorly distributed, even despite its unpretentiousness. This is due to the large size of the pineapple, nondescript color, and quarrelsome character.

In appearance, the climbing perch is somewhat reminiscent of cichlids. The fish can grow up to 25 cm, but in aquariums, the size usually does not exceed 16 cm. Females are larger than males.

The body is elongated in length, the profile of the back and belly is almost straight. The fish has a large head and largemouth. Spines are located on the operculum, which serves as a protective organ (easily pierce the skin, break the nets, etc.) and as an organ of the movement. 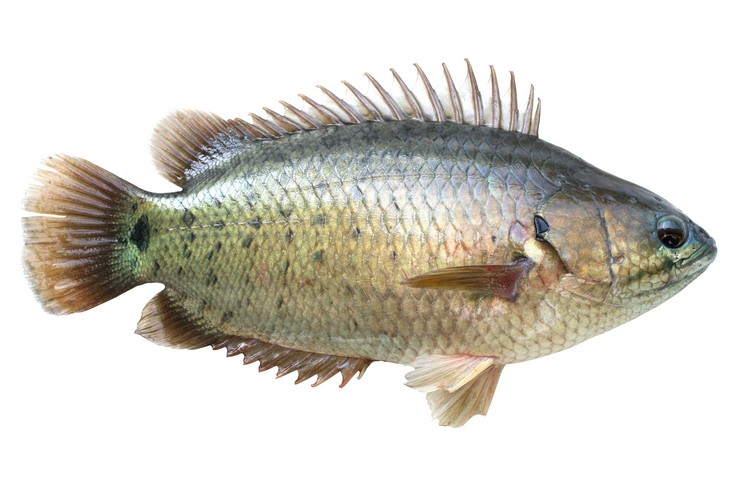 The color of the climbing perches does not differ in brightness. Typically, the body is gray or brown with subtle transverse speckled stripes and two black spots behind the gills or at the base of the caudal fin. The stripes become brighter during spawning.

Life expectancy in aquariums is up to 5 years.

Anabasis widespread in India, the island of Sri Lanka, and the countries of Southeast Asia: Malaysia, Indonesia, the Philippines. In some places (Australia, the Pacific Islands), they were brought artificially and adapted to live in new territories.

The main habitats are swamps, lakes, rice fields, irrigation canals, backwaters of large rivers. During the wet season, when rivers overflow their banks and flood vast areas, fish with a stream of water can move away from the main channel. Therefore, when the water recedes, the fish are often isolated in drying puddles. In such a situation, the ability to move on land or go into hibernation, burrowing into the silt, is used.

Anabases are widely used by the local population. The first copies came to our country in 1960. 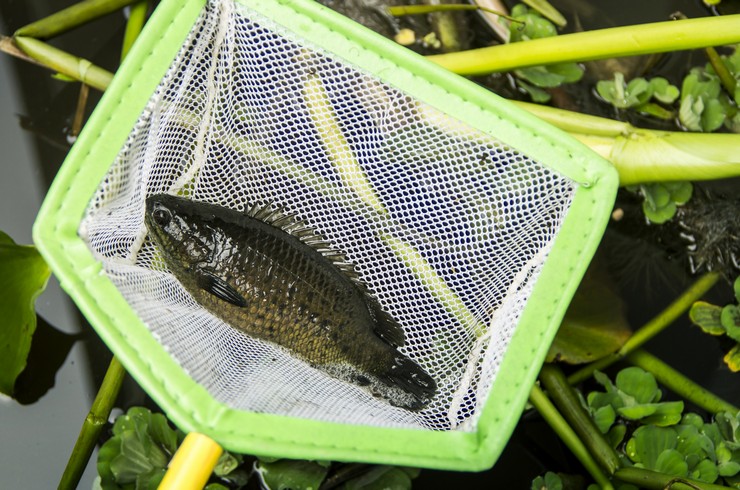 To keep the climbing perch, an aquarium with a volume of 100 liters or more is recommended. It is best to start with a group of young individuals who, unlike adults, are able to live together. The aquarium must be covered with a coverslip. In this case, the distance to the water should be at least 10 cm, otherwise, the fish may hit hard, periodically jumping out of the water for a portion of air.

Decorating the aquarium is not particularly difficult and depends only on the imagination of the aquarist. However, it is recommended to use a soft substrate as a substrate, install a large variety of shelters, and plant live plants along the walls of the aquarium. Don’t forget about the free swimming space.

Fish do not like bright light, so the lighting should be dimmed. A filter is required, but it must be done so that the outflow of water is not too strong. Anabases are active mainly in the evening and at night, so it would be useful to have a lamp with a special “night” illumination in the aquarium. It is better to keep the fish singly or in pairs.

It is necessary to change up to 20% of the water in the aquarium weekly.

Anabasis not a good choice for a community aquarium. This mobile and predatory fish will sooner or later eat any other fish that fit in its mouth. For large pets, for example, pacu, the climbing perch is not scary, but the ideal solution for keeping it is a species aquarium of a suitable size.

The nature of the fish is very diverse. There are both relatively peace-loving individuals that do not touch relatives and other fish, and super-aggressive ones, not attacking all living things. It has been noticed that aggression increases when the fish are kept in high-temperature aquarium water.

In nature, the pineapple behaves like a typical predator. Its diet is based on small fish, earthworms, insects, and other small invertebrates. However, during life in the aquarium, the fish quickly assimilate and eat dry, high-quality food.

Predatory cichlid foods (such as Tetra Cichlid Sticks or Tetra Cichlid Granules) are perfect for feeding climbing perches. These foods are rich in proteins and also contain the necessary complex of vitamins for fish. 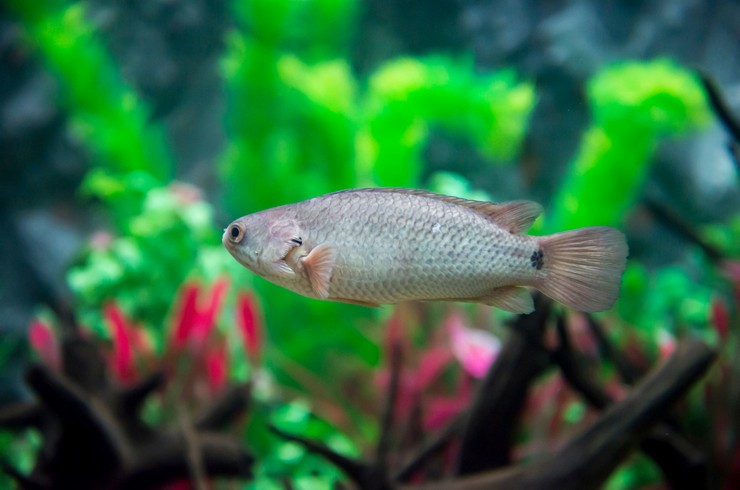 Do not forget that for periods the pineapples also require vegetable feeding, for which you can add floating Tetra Cichlid Algae pellets or modern highly nutritious TetraPro Algae chips to their menu. The high content of spirulina in them will fully satisfy the needs of the pineapple in the plant component.

You can also pamper your pet with tasty and nutritious Tetra FreshDelica treats. Fish will like bloodworms or brine shrimp in vitamin-rich jelly.

Anabasis very voracious fish, so it is necessary to strictly monitor their diet in order to prevent obesity. A weekly fasting day will also be useful.

Natural spawning of the climbing perch is practically not found in the aquarium. Reproduction becomes possible with the use of hormonal drugs. 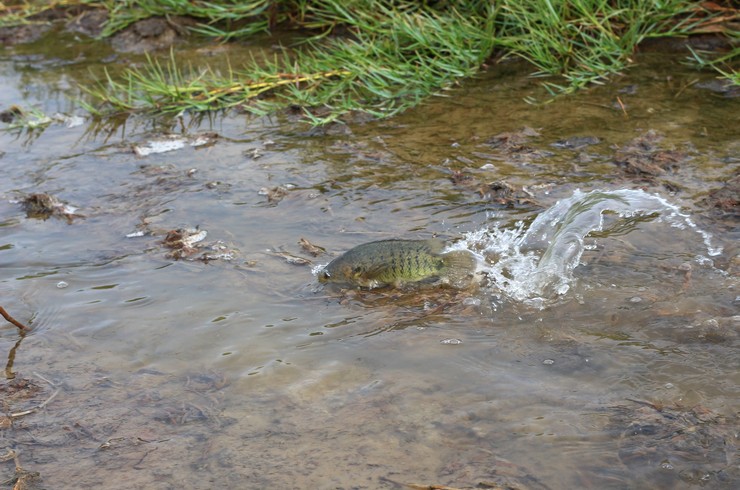 Distinguishing the female from the male is rather difficult, but during the spawning period, it becomes possible. Males acquire a bright, contrasting color: a reddish tint appears on the body and fins. Darker stripes become more expressive. At the same time, in females, the belly grows well as the eggs mature.

For breeding climbing perches, it is better to choose a separate spawning aquarium with a water level of about 30 cm. The water in it should be soft and slightly acidic. In addition to hormones, spawning is stimulated by frequent water changes.

Spawning itself takes place near the bottom or in the middle layers of the water. After a short courtship, the male “hugs” the female and squeezes the eggs out of her, after which she immediately fertilizes. Eggs are very light and float to the surface, where babies appear on average in a day.