France is home to many hunting dogs, including the Basset bleu de Gascogne. As the name suggests, this hunter hails from beautiful Gascony in southwest France. At the beginning of the 20th century, there were only a few representatives of the blue bassets. However, enthusiasts included the “blue dog” in breeding programs again, so this special hunting dog breed has survived to this day.

The Basset Bleu de Gascogne has a noble appearance, strong and athletically built, but not fat. It has the typical long basset hound body and also short legs. When fully grown, it is between 30 centimeters and 38 centimeters high and weighs around 16 kilograms to 20 kilograms. The most striking thing about him is the color of his fur. He has large black spots on a white background, which in turn is covered with black spots. This particular black and white combination makes his coat appear blue overall. 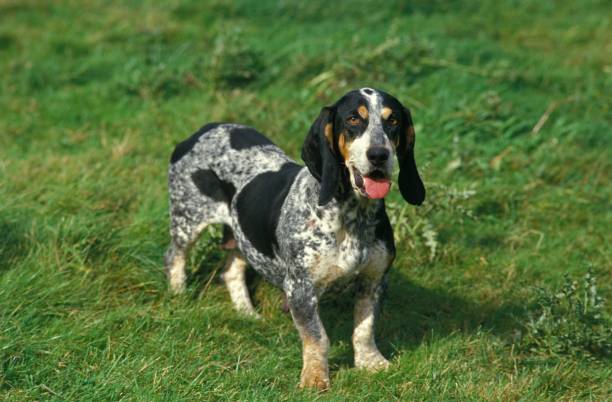 On his face, the typical hunting dog markings in tan create a striking contrast to the rest of the body.

The blue basset is an active lad who needs a lot of exercises to burn off his energy. In addition, his nose has to be challenged every day. Despite his fondness for hunting, he is loyal to his family and is initially reserved towards strangers.

The very typical and powerfully built basset hound is suitable for shotgun and hound hunting. He works alone but is also socially well-tolerated in the pack.

Its head is relatively narrow and slightly arched upwards, the occipital hump is emphasized in contrast to the stop. The Basset bleu de Gascogne has a black, broad nose with well opened nostrils. Its jaw is strong, the incisors are perpendicular to the jaw. The slightly hanging flews cover the lower jaw.

The basset hound’s oval, deep-set, brown eyes give it a gentle, sometimes sad expression. The long, thin ears are tapered and should reach over the tip of the nose.

The body of the Basset bleu de Gascogne is elongated and appears athletic. He wears his long tail proudly as a saber rod. Despite the powerfully built limbs, the Basset has a light-footed and even gait.

The coloring of the short and dense fur is remarkable. It is spotted entirely black and white with black patches of various sizes. The stippling ensures that the fur gets a slate blue shimmer. Hence the “bleu” in the name of the Gascon.

As a true hunter, the Basset Bleu de Gascogne is happiest when allowed to hunt. Once he has a lead, he will not lose it again so quickly. He pursues his prey calmly and purposefully. Since it cannot dash through the undergrowth as quickly due to its short legs, it is just right for the hunter who wants to follow the game on foot without rushing.

When hunting, the basset hound makes its own decisions, if necessary. In everyday life, this independence, as well as innate stubbornness, is often not desired. Therefore, obedience must be consistently trained with the Basset bleu de Gascogne from the puppy age.

The basset feels good in the family. He is loyal to his people. Even if he disappears into the undergrowth for a short time while walking to follow a trail, he will always come back to his master. He loves human company and is affectionate and gentle towards children. The intelligent housemate is always available for lively games. The Basset Bleu de Gascogne is a real bundle of energy that needs several hours of exercise every day. Long walks are no problem for the basset hound as a real long-distance runner. When he’s not hunting, tracking and spotting games are a must at home or in a club.

The blue basset has a relatively short and dense coat that does not require any special care. Brushing the dog thoroughly once a week to remove dead hair is quite sufficient. If larger dirt in the fur has to be removed, the basset hound can also be bathed. Here, however, a special shampoo that is tailored to the dog’s skin should be used. 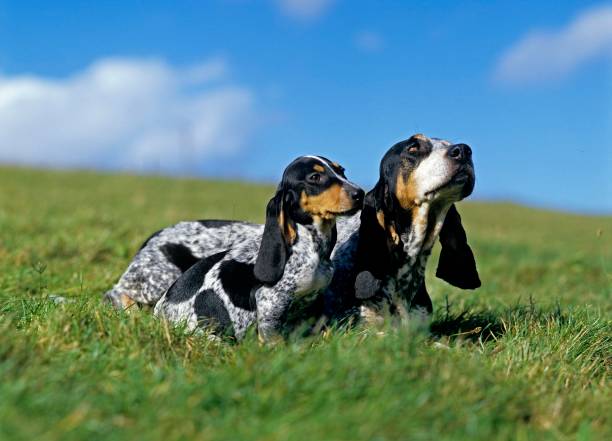 The long ears of the basset hound must be checked regularly. Because of their length, not enough air gets in and out of the ear, which can lead to ear infections. A veterinarian should always be consulted at the first signs, such as crusting, discharge, or a rash.

Hereditary diseases are rare in Basset bleu de Gascogne. However, due to its elongated back, it is susceptible to diseases of the spine and joint malformations also occur from time to time.

This basset hound is prone to bloating and stomach problems. Therefore, attention must be paid to good food and regular, not too large amounts of food. Two to three small meals a day are better than one large one. This can also reduce the risk of stomach torsion.