Bombay cat (Bombay) – a miniature copy of a black panther with the grace of a primordial predator. This animal has inherited the best features of the Burmese and the American Shorthair breed – it is smart, playful, friendly, and easily gets along with everyone, but at the same time, it is not as restless as the Burmese.

The Bombay cat, as the result of a dream come true of one of the breeders, was born in America in the middle of the 20th century. Nicky Horner worked hard on the appearance and character of the future breed, then Herb and Suzanne Zwecker took up her idea.

It took the inspired breeders over 20 years to reproduce the panther in miniature. The development of the Bombay cat breed was hampered by official recognition, which could not be achieved for 35 years.

Cats have a well-coordinated figure, graceful movements, and a slightly predatory look. For the mysterious black-haired beauty, CFA has approved a detailed standard. 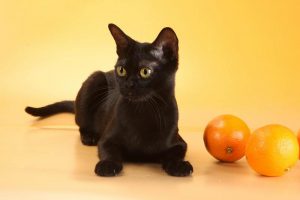 The body is elongated, of medium size. Muscles are very visible. The head is medium in size and with rounded outlines. The muzzle is wide, in profile, there is a moderate stop, but without a break. The tip of the nose is rounded at the transition to the bottom. Ears with rounded tips are set high and of medium size, the distance between them is wide.

Eyes – immediately attract the eye. They are very bright and large, usually amber-copper or golden in color. The distance between the eyes is wide. The limbs are slender, not too long. The legs are rounded. The front feet have five toes and the hind feet have four. The tail is in proportion to the body, strong and dense. Curvature and any kinks are considered disadvantages.

Color and coat – only black coat without stripes and spots is recognized. The pads of the nose and paws should also match the color of the coat. The length of wool is short and silky to the touch.

Bombay cats are not very large pets and do not grow more than 30 cm. The weight of a cat is from 3 to 5 kg, males are usually larger, but not more than 6 kg.

There are two variations of the Bombay cat breed – British and American. They have the same standard, the only difference is the color of the eyes, in addition to amber, a green shade of eyes is allowed for Bombay British women.

Caring for a Bombay cat is easy. During molting, it must be combed out in the same way as any other shorthaired. Outside of this period, satin wool can be brushed with a special rubber brush every few weeks and wiped with a piece of suede for shine. Cats of this breed have an excellent appetite, so it is necessary to control their diet in order to avoid obesity.

Exotic Bombay cats will decorate any home. A striking feature of their character is poise. They easily make friends with dogs and other mustachioed inhabitants. Fights and scratches are definitely not for them. Even parrots can freely walk in the same room with this black purr.

The owners of mini-panthers are treated with love and are attached to them for life. Likes to sit on someone’s lap or just watch the household, the main thing is not to be alone. At the same time, it will not meow annoyingly.

Little children can play with a black beauty without any problems. Aggression is not typical of these cats. In the event that the baby accidentally hurts an animal, then Bombay will simply leave. When guests come to the house, they come running to get to know. She does not need time to adapt – she will immediately start playing and draw attention to herself. Otherwise, this cat is not curious.

Her favorite pastime is to watch the owners and just be with them nearby, luxuriating in an embrace or a loving gaze.