Central Asian Shepherd Dog, Alabai, or Turkmen Wolfhound are the names of one aboriginal dog from Central Asia. For many centuries, these large dogs lived alongside nomads, performing the responsible work of shepherds and guards. In modern society, the attitude towards Central Asian Shepherd Dogs has developed very ambiguously, some admire them, others fear. This is largely due to the complex nature. Only in the hands of experienced dog breeders can an independent, proud and fearless dog become a reliable guard and a devoted friend.

Historians believe that dogs of this type have been used by the peoples of Central Asia for several millennia for herding and protective guard service. For centuries, the breed type has been formed under conditions of strict selection: nature left the strongest in physical strength and health, and a person – suitable in temperament.

For its strength and power, this dog is called the Turkmen Wolfhound. It is a national treasure, therefore, until recently, it was strictly forbidden to export it from the territory of the state. In Kazakhstan, dogs are traditionally used to guard sheep flocks. Representatives of the breed acquired excellent shepherd and watchdog qualities, thanks to the combination of the restraint of a shepherd dog, the strength of a fighting dog, and the wisdom of a black Tibetan wolf. In addition, their kinship with the Tibetan Mastiffs and Mongolian Shepherd Dogs is noted.

In the 30s of the XX century, factory work began on the breed. It was decided to use dogs to guard state-level facilities, but due to the complex nature of the dogs, the task of mass training turned out to be difficult and impractical.

In 1990, the Gosagroprom of the Turkmen Republic approved the standard for the Turkmen Wolfhound. In 1993, the FCI standard for this breed was approved, based on the national standard of 1989. In 2000, the breed standard was slightly changed – the requirements for bite and color were simplified. If we consider the position in the international classification, then the dog breed belongs to the group of Pinschers, Schnauzers, Molossians, Mountain, and Swiss cattle dogs, is included in the Molossian section, the subsection – Mountain Dogs. 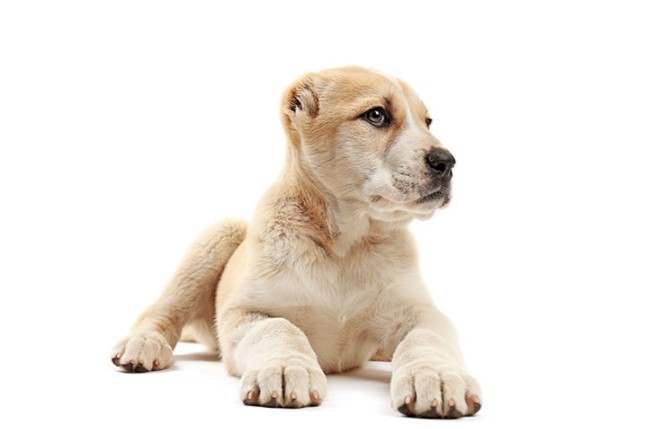 Central Asian Shepherd Dogs are harmoniously built, large dogs with a strong body, well-defined proportions, well-developed, but not prominent muscles. The average height at the withers in males is from 65 to 70 centimeters, in females – 62-65 centimeters. The weight of the animals is 40-80 kg. Central Asian Shepherd Dog is one of the ten largest dogs in the world, in which it takes an honorable eighth place.

The head of the Central Asian Shepherd Dog is proportional to the size of the body. The shape is closer to rectangular. The forehead is flat, the occipital protuberance is pronounced, but poorly visible due to the developed muscles. The muzzle is of moderate length, blunt, slightly tapering towards the nasal mirror. The length of the muzzle is less than 1/2 but more than 1/3 of the length of the head. The nose is large but does not protrude beyond the profile line, the color is black, light is allowed in white and fawn dogs. The bridge of the nose is wide and even. The chin is well developed. The lips are thick, preferably pigmented. The jaws are strong and wide. Scissor bite and straight bite are allowed, as well as “reverse scissors” without retreat. The eyes are of medium size, oval in shape. Brown color. The eyelids are tight, the lower eyelids may be slightly saggy. Regardless of the color, the outline around the eyes should be black. The ears are of medium size, triangular, set low, drooping.

The physique is proportional, which made it possible to highlight several important measurements: the body length slightly exceeds the height at the withers, and the length of the forelimb to the elbow is 50-52% of the height. A prominent dewlap is a characteristic feature. The topline is solid. The withers are well defined. The back is straight and wide. The loin is slightly arched. The croup is sloping and falls towards the tail. The height at the withers exceeds the height at the rump by 1–2 cm. The chest is wide and deep, widening towards the back. The abdomen is moderately tucked up. The tail is set high, in its natural state it is curled into a loose ring or sickle-shaped. The limbs are straight, in proportion to the body, with strong bones and well-developed muscles.

The skin is thick, elastic, relative to the muscles are free. The coat is double, formed by a straight coarse guard hair and a thick undercoat. Depending on the length of the awn, the coat can be short (3-5 cm throughout the body) or elongated (7-10 cm), forming a mane, feathering behind the ears, on the tail, and hind legs. 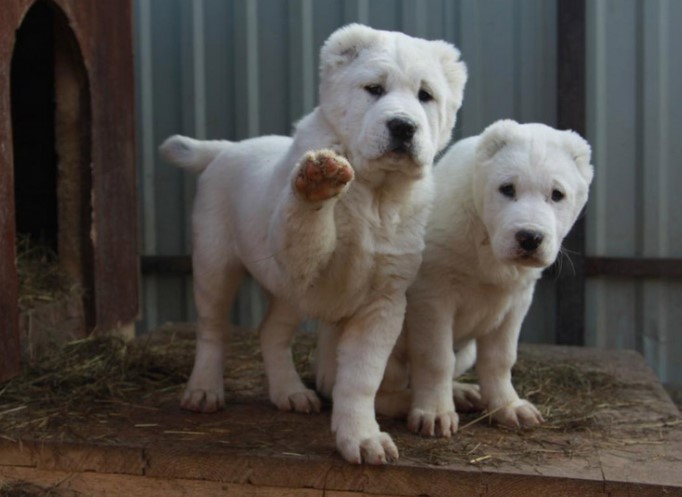 Central Asian Shepherd Dogs are confident, balanced and calm, proud and independent, they are smart and courageous, very hardy, have a high working capacity, and a strong innate instinct for territoriality. One of the characteristic features is fearlessness towards other animals, including large predators. In the family circle, they are kind and peaceful.

Central Asian Shepherd Dogs respect only the owner and his family members. With children, dogs usually get along well and are tolerant. But it is worthwhile to understand that the dog remains a potential threat to the child, since it may simply not calculate its own strength. Alertness or aggression is shown in response to an interest in a dog or owner.

As mentioned above, Central Asian Shepherd Dog is a dog with a very complex character, which is not always acceptable in the conditions of suburban and even more urban life. Some qualities have to be corrected. For example, stubbornness, independence, and self-confidence are often enhanced and sometimes hypertrophied due to the specifics of the breed’s use, namely the independent work of a guard and a shepherd. The dog must be aware that there is someone of a higher rank and must be obeyed, even if this is contrary to his own plans.

It is always necessary to remember about high territoriality. Puppies are very outgoing and friendly, but as they grow older they will try to occupy the highest rank in the pack and in no case allow a stranger to enter their territory. In urban conditions, this takes the form of increased aggressiveness and conflict with other dogs, and sometimes people. 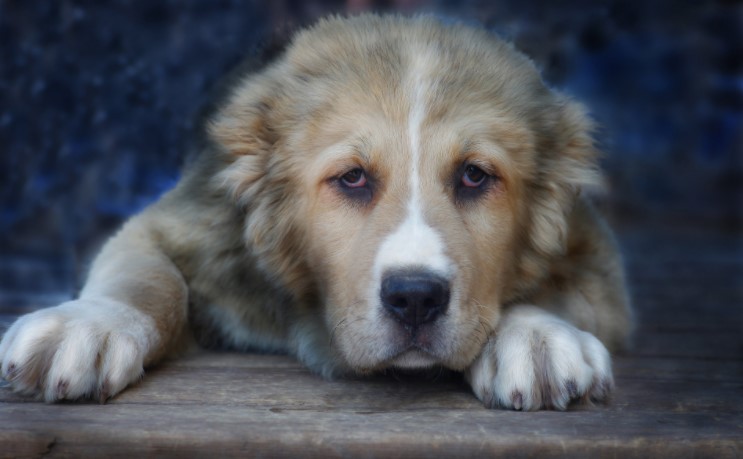 Unfortunately, there is a strong belief that a dog living in the yard does not need regular grooming. Of course, such an animal’s wool will not look the best, a characteristic dog smell will appear, and then skin diseases. The Central Asian Shepherd Dog will only look beautiful if the dog is regularly looked after.

Brushing the fur, cleaning the ears, rubbing the eyes is the minimum program that must be performed every week. The coat of the breed is self-cleaning, but it is still advisable to bathe them at least two to three times a year, usually after seasonal molting. If a Central Asian Shepherd Dog participates in exhibitions, he should look perfect. Naturally, this implies more complex grooming and the use of professional cosmetics. 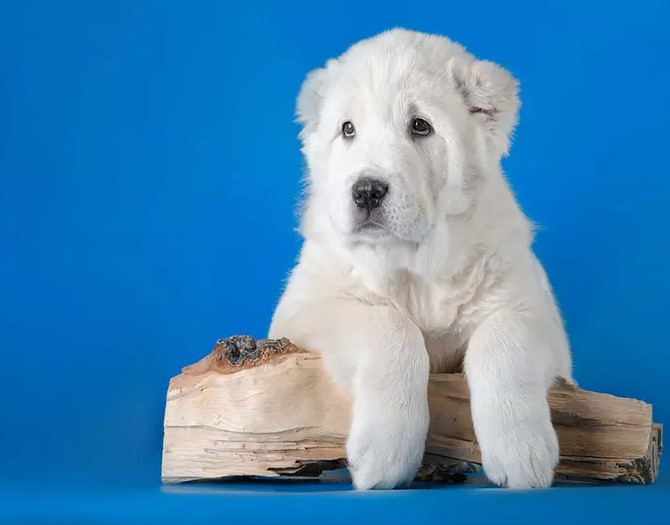 Central Asian Shepherd Dogs can boast of excellent health, they are strong and hardy, but are not devoid of hereditary diseases. Some defects are noticeable almost from birth, others are discovered as they grow up:

Like other giant breeds, these dogs are at risk for gastric and intestinal volvulus. The breed is prone to and sensitive to worm infestation. And of course, the development of diseases associated with poor care, maintenance, nutrition, or lack of vaccination cannot be ruled out. The average life expectancy is 10-12 years.