Cherry shrimp (Neocaridina heteropoda, or Red Cherry Shrimp) is the most popular representative of crustaceans, which is widely used in hobbyist aquariums.

Cherry shrimp are valued for their unpretentious maintenance, high reproduction rate, and the undoubted benefits that these small invertebrates bring, eating food residues and algal fouling. In addition, bright red cherry shrimps are able to revive any aquarium landscape, look beautiful against the background of the surrounding greenery of living plants, it is interesting to watch their constant fuss. They are a good choice for beginner aquarists, as they can exist in a wide range of water parameters, they are not as demanding on conditions as other types of shrimp, for example, crystals, in addition, they can be settled even in a small aquarium.

Cherry shrimp is a small crustacean, it grows in length up to 2.5-4 cm. The body is translucent, elongated, flattened from the sides, includes two sections – the cephalothorax and abdomen. The legs are located on the anterior abdominal segments. The cephalothorax is protected by a shell that covers the gill cavities. The back of the cherry shrimp is usually pinkish-red in color, the claws and legs are covered with small light spots that form a characteristic marble pattern. Mustaches are either white or pink. 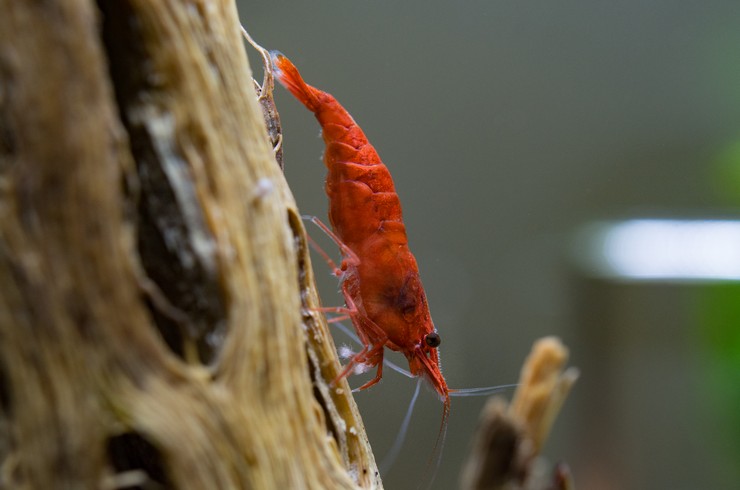 The general color of the body is often cherry of varying intensity, extremely changeable, pigment cells are able to instantly expand or contract, and the shrimp can instantly turn pale or, conversely, become very bright. This phenomenon depends on a complex of factors – nutrition, environmental parameters, surrounding vegetation, neighbors in the aquarium, and even age. On the dark ground, cherry shrimp usually also darken and acquire a richer color, in case of stress (for example, when starting a new aquarium) they can practically discolor. As a result of breeding work, there are many fixed options for the color of cherry shrimp, for example, “red fire” – a bright red color with an opaque shell.

Males and females differ in size; females are usually larger, thicker, and brighter. But the main distinguishing feature is the “saddle” on the back of females – a yellowish spot that represents the ovaries, in which eggs develop.

In the process of growth, cherry shrimp, like other crustaceans, molt and shed their old chitinous cover. Sometimes in the aquarium, you can see an empty shell of a shrimp, which does not have to be removed – it will serve as an additional source of food for the cherry tomatoes themselves. 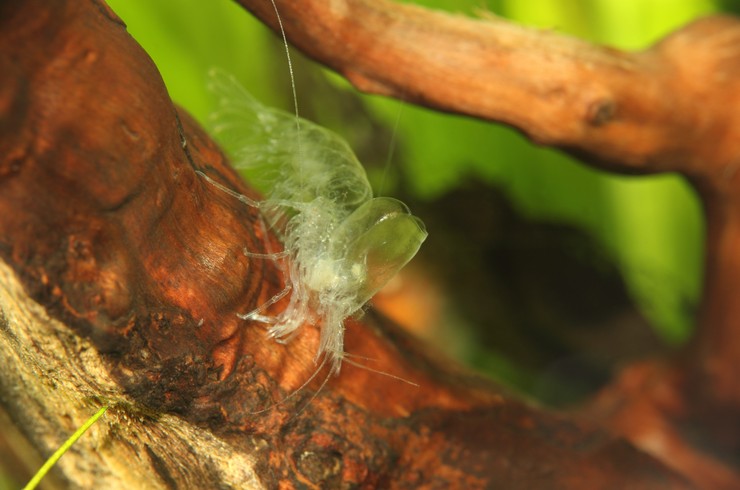 In nature, representatives of the species Neocaridina heteropoda, living in slow-flowing rivers, streams, and lakes, are usually discreet in color, which helps them hide from predators. After all, a bright color attracts attention and poses a threat to be eaten. The species includes several subspecies – two of them live in the Chinese provinces of Zhejiang, Anhui, Henan. The rest of the neocaridin species are found in freshwater bodies of Taiwan and Korea and have been known since 1938. The common transparent neocaridins were the first to gain popularity and spread among aquarists, later being replaced by the brighter cherry shrimp. Cherry shrimp is the result of neocaridin breeding in Germany, obtained by selecting individuals with the desired color.

As already noted, cherry shrimps are very unpretentious to water parameters and adapt well to them. Due to their small size, they are suitable for keeping even in miniature, nano-aquariums with a volume of 5 liters or more, and are common as inhabitants of aquascapes. 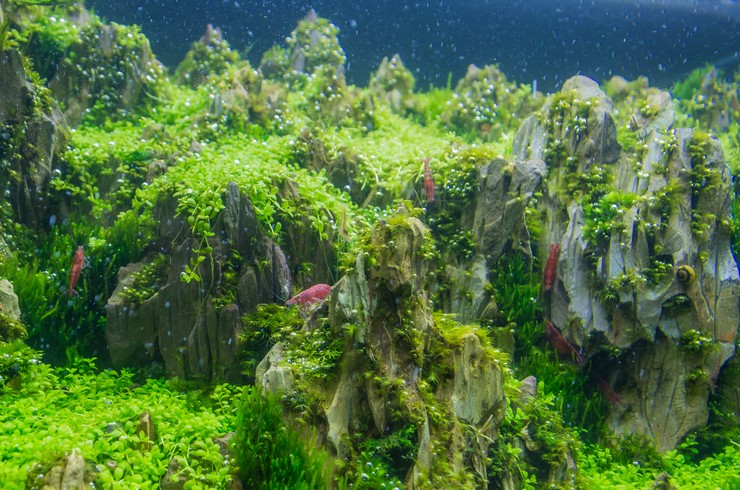 For example, in a volume of about 5-10 liters, up to 10 individuals can be settled, however, with a sharp change in the conditions of existence, shrimps are stressed, so it is better to choose an aquarium of 30-50 liters for them and put more of them there. Usually, it is not possible to calculate the exact number of cherry shrimps in an aquarium, since they reproduce quickly enough.

It is better to use the soil in the aquarium with a fine fraction of 0.5 – 1.5 mm. Filtration and aeration should be organized. It is advisable to place driftwood in the aquarium, overgrowing it with moss: wood serves as food for newly hatched shrimps, and moss is an additional shelter.

Despite their good adaptability, cherry shrimp are sensitive to the content of nitrates, ammonia, and copper compounds in the water; it is undesirable to plant them in a freshly started aquarium. Copper-based fish medications and anti-snails can harm these crustaceans. Another hazard to shrimp is the planaria. In an aquarium with shrimp cherries, it is imperative to plant live plants that will serve as a shelter and resting place for them, especially during molting, when cherries are most vulnerable. These animals can often be observed sitting in thickets of plants, they are especially fond of various types of mosses (Javanese moss, Christmas moss, etc.), Riccia, Cladophora, ferns. Among the small leaves of these plants, shrimp find additional food for themselves in the form of algae and feed suspension. 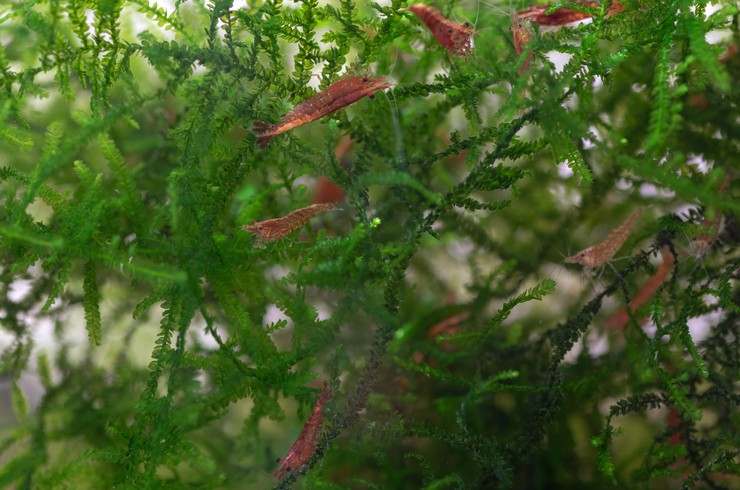 Cherry shrimps are absolutely peaceful creatures, they spend most of their time in search of food, “graze” on plants, soil, stones, and a glass of the aquarium, quickly touching their paws. They must be kept in a group. You can put shrimp in a species aquarium, where they will feel as comfortable as possible. However, these crustaceans get along well with small, calm, and non-aggressive fish, such as guppies, mollies, neons, zebrafish, ototsinkluses, and microscopic galaxies. But still, they are quite vulnerable, so even small fish can harm them, moreover, in the vicinity of active and mobile fish, cherry shrimps experience constant stress, often hide, and may turn pale. It is not recommended to keep them with any, even dwarf, cichlids, and predatory fish. For example, scalars or battles can quickly destroy all cherries. Helena’s predatory snails can also catch and eat small cherry trees. Young individuals are more likely to be eaten in the general aquarium, which is partly offset by the high fertility of the shrimp, as well as their ability to hide in the ground and plants. Therefore, for the comfortable life of these arthropods, dense vegetation is extremely necessary. Typically, the life span of cherry shrimp in an aquarium is a year and a half, but they multiply quickly and maintain their population. 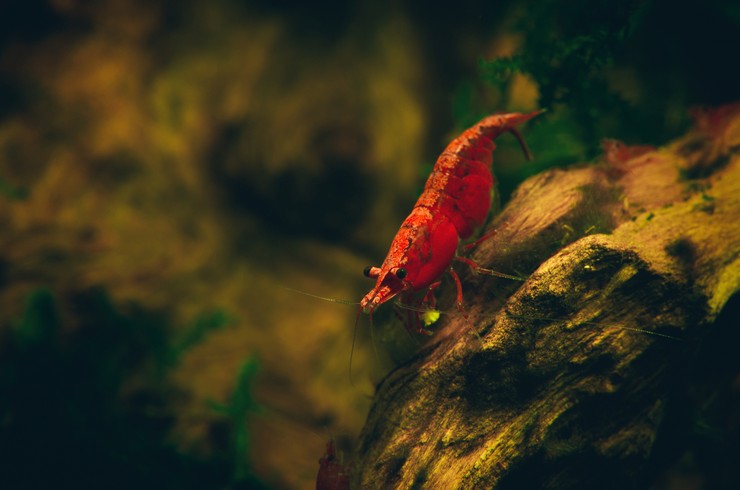