Previously, cats lived only in the wild, but once, having become human companions, they became helpers and companions, and so domestic cats appeared. These creatures are independent and clean, do not require careful care, and it is a pleasure to communicate with them.

Initially, such a pet was valued for its ability to catch various rodents, so cats were bred in Ancient Egypt and Rome as useful household helpers. In our time, the mustachioed purr is an immeasurable source of joy, which is simply admired and delighted with its co-presence.

The ancient civilization treated these four-legged with special trepidation – the cat was sacred to them. A bad attitude towards the mustachioed was severely punished.

Time passed, and domestic animals in the form of cats zealously “trampled” the entire globe – after Egypt, they appeared in Greece, Georgia, and then in Europe.

In nature, there are large individuals of the feline world, such as – cheetah, tiger, caracal, lynx, etc., as well as smaller ones that look like a domestic cat – this is Pallas’s cat, ocelot, forest cat, steppe cat, etc. It is the last subspecies – steppe and forest – that allowed a cat to appear, which was tamed and made a domestic animal. 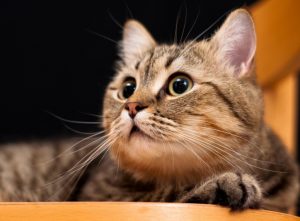 Once in Europe, the mustachioed creatures interbred with wild European cats, and this is how the domestic shorthair cat was born with a light chocolate shade of hair and longitudinal stripes. In the process of taming, such a wild trait of behavior as aggression practically disappeared into purring.

It became more comfortable for the animal to live next to people, as well as to facilitate hunting. Humans, in turn, have benefited from this relationship, and the domestic cat is now a favorite in most families.

Any four-legged from the feline world, including the domestic cat, is an ideal predator. Nature has endowed him with everything he needs to quickly adapt to any environment and become an excellent hunter.

The torso has unique proportions and structure. The average length is 50-70 cm. The average body weight is 3.5 kg, but in a cat, it can reach 8 kg. In some cases, for example, with obesity or some large breeds, the weight is even more than 10 kg.
Eyes – their pupils tend to expand, letting in more light, thanks to which cats see well;
The ears are incredibly sensitive, they hear very faint sounds and can clearly identify their origin.
Nose – the sense of smell at the whiskers is less developed than hearing, but at the same time, the still blind kittens can easily find the mother’s nipple, and the male will find the female by smell.
Whiskers and vibrissae – they work as antennas that allow the animal to navigate anywhere and in the dark.
The limbs are strong and flexible. When an animal is aggressive, it shows its sharp claws.
Tail – serves as whalebone to maintain balance. A domestic cat with the help of a tail will make it clear what his mood is. If the tail is a tube, it means that the pet is ready to play and caresses, and if it is down, then, most likely, the animal is worried about something.
Voice – purrs willingly use it to attract attention and during mating.

Almost all wild cats are dangerous to humans, they are characterized by aggression and cruelty. Unlike its free counterparts, the domestic cat, although it belongs to carnivorous mammals, has a softer character. The aggressive grin of a tamed purr can be seen in the presence of an enemy attacking the animal.

In turn, there is a certain duality in the character of a cat living next to people – friendliness and playfulness intersect with the love of freedom. In some breeds, aggression is also noticeable, but it does not go beyond the limits that would be dangerous to humans.

In general, the behavior of domestic cats is in many ways similar to the actions of their wild counterparts – they also mark territory and protect it from outsiders. This is done by those who have access to the street, if the pet lives exclusively in an apartment and from a young age is taught certain rules, he naturally will not mark all the corners.

When it comes to training, cats, as independent creatures, do not like forced training. You need to be able to establish contact with the animal and with a good attitude, the mustachioed creature will undergo some training and will try not to upset its owners. Of course, a lot depends on the breed and temperament.