Don Sphynx is a young breed, officially recognized and registered in 1996. Don Sphynx is affectionate, not aggressive, playful, has a few dog habits, but at the same time unobtrusive and tactful. 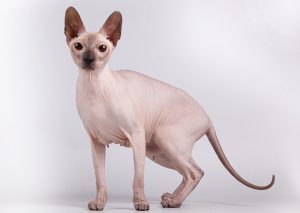 In 1990, a litter was obtained from an unusual cat. According to some reports, all kittens have inherited her unusual appearance from their mother. They were born with short hair that has been preserved for a while. During this period, they all managed to find owners.

It turned out to be easy to get new offspring from bald kittens. This sign turned out to be quite persistent. However, at first, hairless kittens were not in demand at all. To preserve the offspring, they were forced to hand them over to safe hands. There were no people willing to pay money for animals of an outlandish appearance.

However, the situation changed quite quickly. This was also facilitated by the growing popularity of the Canadian sphynxes, which were also deprived of their hair, and the perseverance of Irina Nemykina. In the early 90s of the last century, the first, so far preliminary, description of this breed was compiled.

In 1997, phenologists registered the breed standard, which is still relevant today. And already next year, the sphynxes were waiting for success in the international arena.

These are heat-loving cats, do not need special care, and practically do not cause allergies. They have very sensitive skin that needs to be wiped with a damp sponge.

Don Sphynxes love to sunbathe, so a slight color change is possible. But excessive sun exposure is harmful to the health of the sphinx.

The cat is distinguished by a muscular body devoid of hair, silky and hot to the touch skin, high thin paws with long and thin fingers, a long tail, an expressive muzzle, large ears, large almond-shaped or slightly slanted eyes.

They are distinguished by great affection for people with a complete absence of aggression. Affectionate, not vindictive, playful, but not intrusive, tactful, and restrained enough.

According to the type of wool, the Don Sphynxes are divided into 4 types:

Naked. These are cats with absolutely no hair. Their skin is similar to human skin but much hotter to the touch;

Folk. Kittens are born covered with soft down, almost indistinguishable to the eye. Their skin resembles the skin of a peach. However, after a while, usually, by their second birthday, they completely lose it;

Velours. Such sphinxes are born with more noticeable down, up to 2-3 mm in length. They are very pleasant to the touch, but with age, they can lose all their hair;

Brush. Covered with short, coarse, bristle-like hair. Such individuals can participate in inbreeding, but cannot count on prizes at exhibitions.

The behavior of the Don Sphynx is as unusual as its appearance. Fans of this breed note that their pets are more like dogs by nature. They are also owner-oriented, quick-witted, trainable. But at the same time, they retain truly feline self-esteem.

According to numerous reviews of the owners of the Don Sphynxes, the following characteristics of the breed are formed: affectionate, good-natured, loyal, unforgettable.