This noble Englishman is the most popular greyhound in the world: every year tens of thousands of Greyhound puppies are born on planet Earth: for example, in England, about 10 thousand Greyhound puppies are born annually in Ireland – about 25 thousand, and in the USA, Spain, and Australia – 50 Thousand English greyhounds! There are several versions of the origin of this noble breed. So, some researchers believe that these dogs came to Foggy Albion thanks to their ancestors – the Arab Sloughis brought to England in the 10th century. Other experts insist that English greyhounds existed in ancient Egypt, and as evidence, they cite images of dogs similar to Greyhound in the tombs of the pharaohs. Still others (and most of them) consider the British Isles to be the origin of the English greyhound and the ancestors of the fast and agile Celtic greyhounds. This version is most similar to the truth. 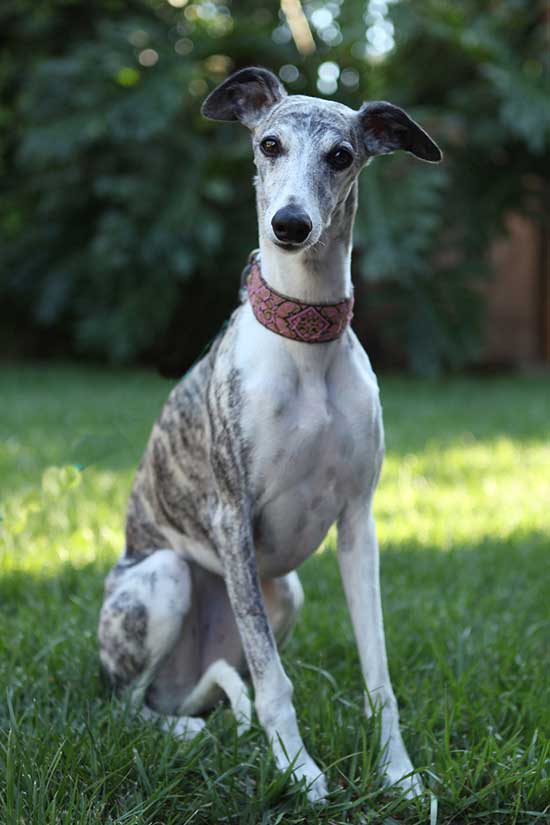 There is also a constant debate about the etymology of the name of this breed, but we will not indulge in this philological jungle and see what is so remarkable about this glorious dog. English greyhounds have been used for many years as excellent hunting companions for hares, foxes, deer, and wild boars. But with the fact that the number of hunting objects in the British Isles became less and less, Greyhounds began to be bred as sports dogs – to participate in hare-baiting or horse racing competitions, which since the 16th century were very popular in England. Among the regular visitors to the races were royals, for example, King Henry VIII, because of his excitement, lost a large amount of money at the races. In the 19th century, hunting with greyhounds was banned in England, and horse racing began to become even more popular. The number of fans of these competitions also grew exponentially, they began to unite in clubs and keep pedigree books of purebred greyhounds. At the end of the 19th century, with the advent of dog shows of the century, Greyhounds became their constant participants, from that time on the breeding of a new type of breed began. Modern Greyhounds are divided into a show, running, and hunting, but regardless of their “specialization”, these dogs are famous for their good health, obedient disposition, unpretentious character, and of course, for their excellent working qualities. The Greyhound is an incredibly fast dog: for example, running dogs can reach speeds of up to 72 km / h. By the way, in some countries, Greyhounds who are retiring from big sports are happy to move from nurseries to families and easily take root with their new owners. The appearance of a Greyhound is known even to a child: it is a tall dog with a chiseled elongated body, powerful muscles, slender and flexible legs, a long neck and head, a long tail set low, small thin ears, and surprisingly intelligent, obliquely set dark eyes. The coat of the Greyhound is dense, but not rough to the touch, the color of these dogs is white, black, brindle, deer, and blue, combinations of these colors with white are also allowed. The height at the withers of the English greyhound ranges from 69 to 76 cm, weight – from 27 to 32 kg. Many consider the Greyhound to be the ideal dog, and this is not just the flattery of his fans, but a truly popular truth. He is very friendly and thanks to his easy disposition he will get along with anyone, including his four-legged brothers – because he understands that living together is much more fun and interesting. It is important for owners of English greyhounds to ensure that the hunting instincts of the pet do not show up on walks. By the way, even an adult Greyhound lends itself easily to re-education: after all, he is a very flexible dog and is well versed in human intonations, besides, the master’s word for him is the law. Residents of Foggy Albion do not in vain call their favorites “fast-moving sloths”: in everyday life, the Greyhound often loves to relax and lie around. But the doggie will be just as happy to go for a long walk or play with the children. Make sure that while walking your pet runs properly: fitness must be present in the life of these dogs. Greyhounds, easier than many other dogs, tolerate loneliness and will not damage property in your absence. By the way, the fact that they are one of those rare breeds that have been allowed into the most important rooms in the house – the living room and bedroom – speaks about the integrity of the Greyhound.