The Exotic is sweet, docile, and quiet, but don’t get the idea that she is merely an adornment for the home. She loves to play when she’s not sitting in a lap or being petted. 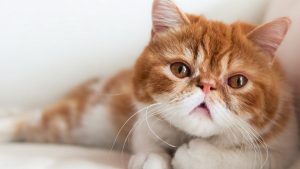 If the Persian is a cat in a glamourous evening gown, the Exotic is the Persian stripped down to its skivvies. The Exotic Shorthair, or Exotic for short, is a Persian of a different coat. The new breed first began to be developed in the 1950s by crossing Persians with American Shorthairs and, later, other shorthaired breeds such as the Burmese and the Russian Blue, then breeding back to Persians once the short coat was achieved. The eventual result was a cat with the same features and personality as the Persian but wrapped in a short, plush, easy-care coat.

The cross, which had originally been intended to bring the Persian’s striking silver color and green eyes to the American Shorthair, was controversial at first, but Persian breeders became intrigued by the new look and began to cooperate in the development of what became known as the Exotic.

The Cat Fanciers Association recognized the breed in 1967 and called it the Exotic. In some other associations, it’s known as the Exotic Shorthair to differentiate it from the Exotic Longhairs that sometimes appear in Exotic litters and are considered by some associations as a breed unto themselves. The International Cat Association recognized the breed as the Exotic Shorthair in 1979. Today Exotics are recognized by all cat registries. Exotics these days are outcrossed only to Persians and Himalayans, not to any shorthaired breeds.
This is a medium-size cat. Exotics usually have a weight range of 7 to 12 pounds. 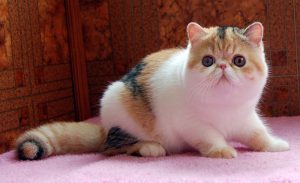 Like the Persian, the Exotic is sweet, docile, and quiet, but don’t get the idea that she is merely an adornment for the home. She loves to play when she’s not sitting in a lap or being petted. Exotics have a reputation for being more active and curious than their Persian siblings, and they are more suited to an active family. Males are said by some to be sweeter and more affectionate than females, who are sometimes described as aloof.

Exotics enjoy batting at toys for as long as you will play with them but are capable of entertaining themselves when their people are busy or away. They follow faithfully after family members and wait patiently for any attention to come their way. Exotics are little heard, but when they do speak it is in a soft, pleasant, and musical voice. An Exotic’s needs are simple: regular meals, a little playtime with a catnip mouse or feather teaser, and lots of love, which is returned many times over.

Both pedigreed cats and mixed-breed cats have varying incidences of health problems that may be genetic in nature. Although they are beautiful and sweet, Exotics are prone to a number of potential health problems, most commonly related to their facial structure:

The Exotic is often nicknamed “the lazy man’s Persian.” Comb the Exotic twice a week to remove dead hair and keep the coat shiny and healthy. A monthly bath is a good idea. Be sure to blowdry the cat thoroughly.

Excessive tearing can be a problem in this breed, so wipe the corners of the eyes clean daily to prevent under-eye stains from forming. Brush the teeth to prevent periodontal disease. Daily dental hygiene is best, but weekly brushing is better than nothing.

It’s a good idea to keep an Exotic as an indoor-only cat. He’s not a scrapper and would fare poorly against other cats, dogs, coyotes, and the other dangers that face cats who go outdoors. Exotics who go outdoors also run the risk of being stolen by someone who would like to have such a beautiful cat without paying for it.

In all respects but coat length, the Exotic shares the Persian’s sweet expression and soft round lines. It has a large, round head; large, round eyes; a short nose; full cheeks; and small ears with rounded tips. The head is supported by a short, thick neck and a deceptively sturdy, muscular body—a type known as “cobby.” An Exotic’s legs are short, thick, and strong with large, round, firm paws. The tail is short but proportional to the length of the cat’s body.

A medium-length soft, thick, plush coat with a rich, thick undercoat completes the Exotic’s look. It does not have the ruff or the plumelike tail of the Persian.

Exotics come in different “looks,” known as extreme and traditional. “Extreme” Exotics, those seen in the show ring, have a flatter face, which may come with breathing problems. Cats with the traditional look have a more old-fashioned appearance, with a face that is not as flat and a nose that is set lower on the face with more of a “break,” permitting easier breathing. They are registered by the Traditional Cat Association.

Exotics of all stripes stand out for their infinite variety of coat colors and patterns. Imagine, if you will, seven solid color divisions — white, blue, black, red, cream, chocolate, and lilac — plus silver and golden division colors of chinchilla and shaded silver or golden and blue chinchilla and blue shaded silver or golden; and then there are the shaded, smoke, tabby, calico, particolor and bicolor divisions. That’s not counting the various pointed patterns of the Himalayan. 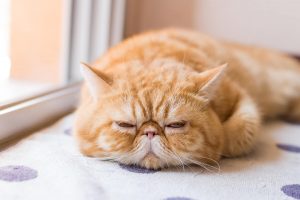 Exotics are adaptable and can do well in homes with children who treat them nicely. They also get along with cat-friendly dogs.