Among the cichlids of Lake Tanganyika, the Frontosa is especially prominent – a large species in a striped “vest”. This calm and sluggish fish mesmerizes with its unhurriedness and sometimes hangs in one place as if thinking about something. How to properly contain this guest from a distant African continent, read our article.

Frontosa, or Cyphotilapia Frontosa, is a ray-finned fish from the Tsikhlov family, until recently the only representative of the genus. You can meet this gorgeous fish only in the African lake Tanganyika. Despite its impressive size and the need for a large aquarium for maintenance, it is one of the most popular cichlids.

This majestic fish has an attractive striped color and a pronounced fat bump on its head. In the aquarium, it is slow and imposing, for which it received the name – Queen of Tanganyika. 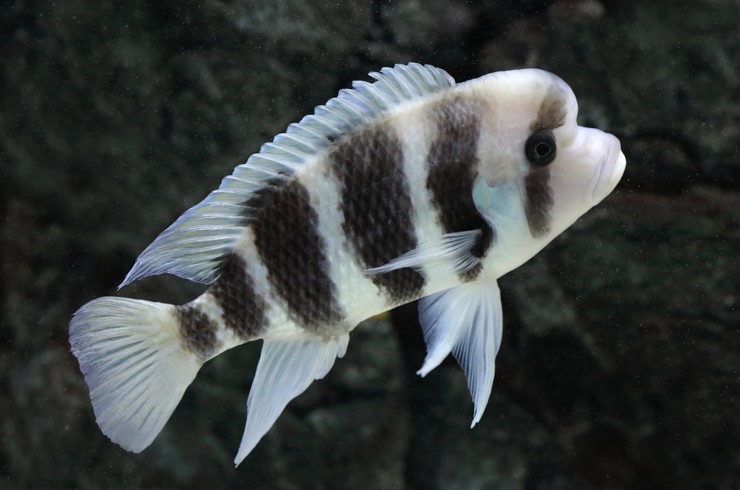 Frontoses are distinguished by high intelligence, when they are kept at home, they quickly remember the owner, allow themselves to be fed from their hands and let them a pet.

The scientific description of the species was given to the fish in the distant 1906 by the English ichthyologist George Albert Boulenger. Throughout its history, the fish several times passed from one taxonomic group to another, until it became the only representative of the genus Cyphotilapia.

However, in 2003, a group of ichthyologists from Japan described another species – Cyphotilapia gibberosa, which lives mainly in the southern part of Lake Tanganyika.

Frontoses have a massive and sturdy body. The size of adult males reaches 30 cm, females are slightly smaller. A characteristic external sign of prognosis is the presence of a fatty outgrowth above the head. It is present in both females and males, but the latter is much larger. Young individuals are deprived of the “wen”.

The eyes are small with a golden border, the mouth is large with fleshy lips. The lower jaw is capable of being strongly pulled back. 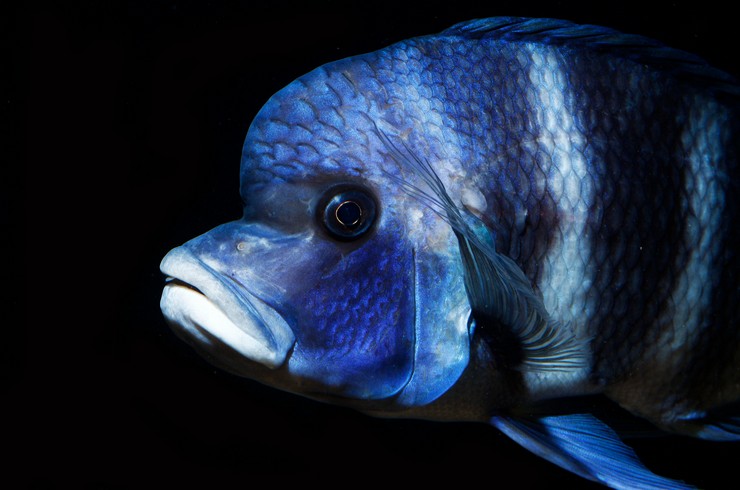 The body color is white or blue with wide dark stripes, the number of which varies from 5 to 6: the former usually passes through the eyes, and the latter borders the caudal peduncle. The color and saturation of the streaks are good indicators of the fish’s health. If they are pale and practically merge with the main body color, then the Frontosis is uncomfortable.

Currently, several color and geographical races are known, which differ in color intensity, number, and location of stripes.

Frontosa is endemic to Lake Tanganyika in Africa. It is the longest freshwater lake in the world, with a length of 676 km. It is of tectonic origin and belongs to the group of the African Great Lakes.

It is believed that the name of the lake comes from the phrase “Etanga Yanya” from the language of the Bemba tribe and translates as “a water reservoir full of fish.” This very accurately characterizes the lake, because more than 200 species of fish live here, most of which are not found anywhere else. This species diversity is explained by the fact that during its history the lake has never dried up, and for a long time it was brainless. 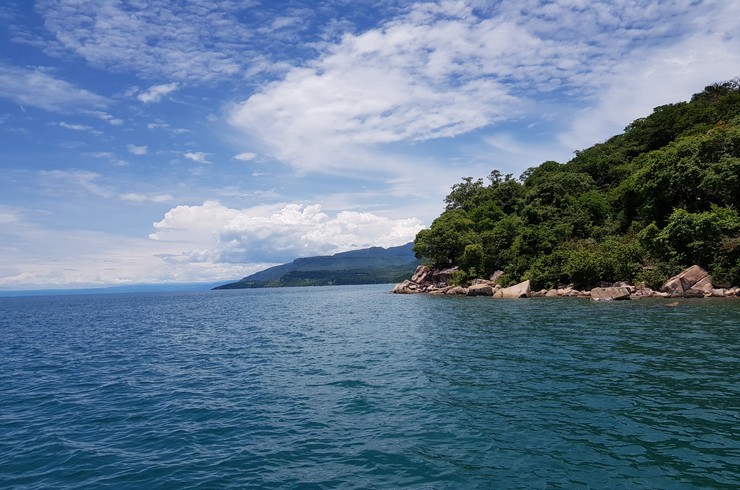 Frontoses is mostly crepuscular and nocturnal. This is due to the fact that the slowness of these fish does not allow catching up with prey, therefore they prefer to eat when their victims are sleeping.

Frontoses live in large flocks along the sandy shores of the lake. Juveniles are found at depths of up to 10 m, while adults prefer to stay at a depth of 50 m.

Frontoses are large cichlids that require a fairly large aquarium to keep. It is best to settle the fish with harems of one male and 3-4 females. For such a number of fish, you will need a container with a volume of at least 300 liters. Adult fish will look best in aquariums 50-60 cm high.

The sand of medium fraction is used as soil. Decorate the aquarium with several large stones and snags, from which it is desirable to create various shelters. In them, fish will be able to hide during the day, because the Frontoses prefer to be active at dusk. The decorations should be firmly fixed, as the fish often undermine them. Live plants in the company of Frontosis usually do not last long, so planting them (with the exception of hard-leaved plants, for example, anubias) is not advisable. 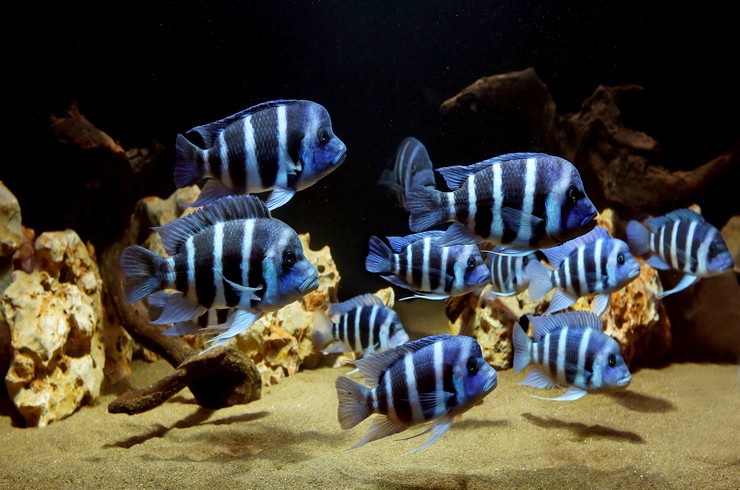 Like any large fish, Frontoses love clean water saturated with oxygen. Therefore, it is important to equip your aquarium with a powerful external filter and compressor. A thermostat will not be superfluous, because the comfortable temperature for Frontosis is about 25 ° C. Fish prefer hard water, so sometimes you need to use marble chips or natural corals in the aquarium. You should not put very bright lamps in an aquarium with Frontoses, fish like semi-darkness more.

To maintain high quality, weekly water changes are required – up to 20% of the tank volume.

The ideal option for placing Frontosis is a species aquarium. Keeping with small species is impossible due to the predatory lifestyle of these cichlids. Any fish that fits in your mouth will most likely be eaten.

As roommates, you can pay attention to Yulidochromis, Lamprologus, Princess of Burundi, and other Tanganyika cichlids, if their size matches the size of Frontosis.

They often get along well with relatives from Lake Malawi. However, for slow Frontosis, the eternally scurrying Malawians are real stress, besides, they must be quite large. 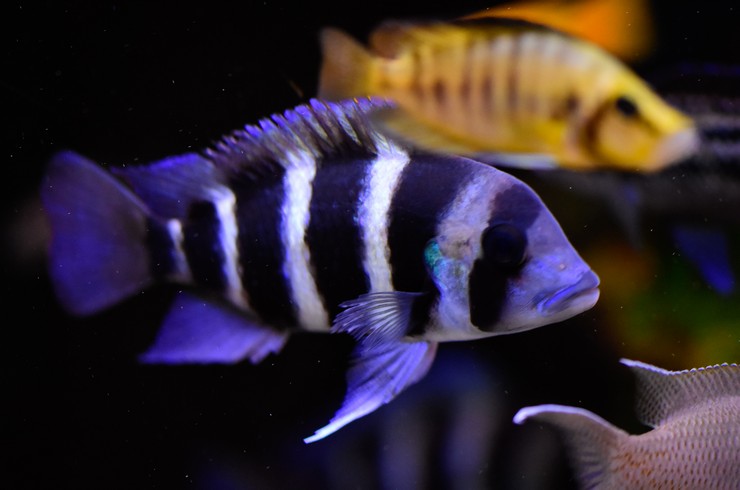 Often they get along well with large American cichlids, however, care must be taken that they do not offend Frontosis and do not eat all the food.

In general, Frontoses are not particularly aggressive. They can be kept with large iris, large barbs (for example, shark Balu), and catfish (cynodonts, pterygoplicht).

You should not plant ampullary and other aquarium snails, frontosa, obeying instinct, will quickly destroy them.

Reproduction of Frontosis at home is not difficult, but it will require some patience because fish become sexually mature at the age of 3 years. To get offspring from these cichlids, you do not need a separate spawning aquarium, the whole process can take place in general.

Identifying the male and female is not difficult: males have a well-developed fatty “cap”, elongated ends of fins, and are 5-7 cm larger than females. 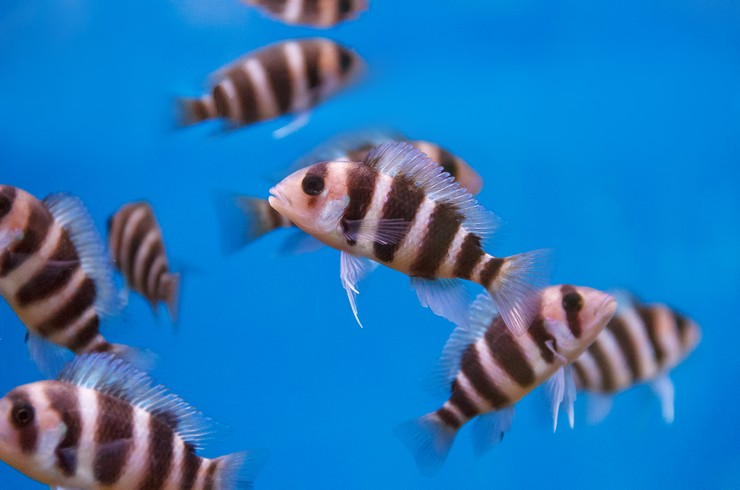 The male chooses the spawning place. Usually, he digs a hole in the ground and persistently invites the female to spawn. The fecundity of the female is low – 60-80 large eggs. After laying eggs, the female takes them into her mouth and swims up to the male, which releases his milk. Thus, fertilization takes place in the mouth of the mother. Incubation lasts about 30-40 days, fry is born quite large, without a fat “lump”. The male at this time protects the territory from encroachments. Unlike Malawians with a similar breeding pattern, frontosa feeds during gestation, but it does so very carefully.

Growth rates are fast. In suitable volumes, the fry can reach a size of 15-20 cm in a year.