Any owner of a cockerel fish sooner or later thinks: is it possible to get offspring from such a beautiful pet and how difficult it will be? We hasten to please right away – the process of breeding cockerels at home is quite simple (despite the fact that cockerels are spawning fish) and requires minimal effort, but here, of course, there are some subtleties. We will tell you how to create optimal conditions for breeding cockerels in our article.

Spawning is a very important process in the life of cockerels. After puberty, which occurs at the age of 3-4 months, practically regardless of the surrounding conditions, the female begins to develop eggs. To get rid of it, the help of the male is needed, who will squeeze the eggs out of the female’s body. Only some females are able to free themselves from eggs. Thus, if there is no regular expression of eggs, this in most cases will surely lead to the development of cysts in females and their subsequent death. Regular spawning is no less important in the life of the male, which at the same time increases the life expectancy. Therefore, in no case should you neglect the regular breeding of cockerels, even if you do not plan to raise fry. 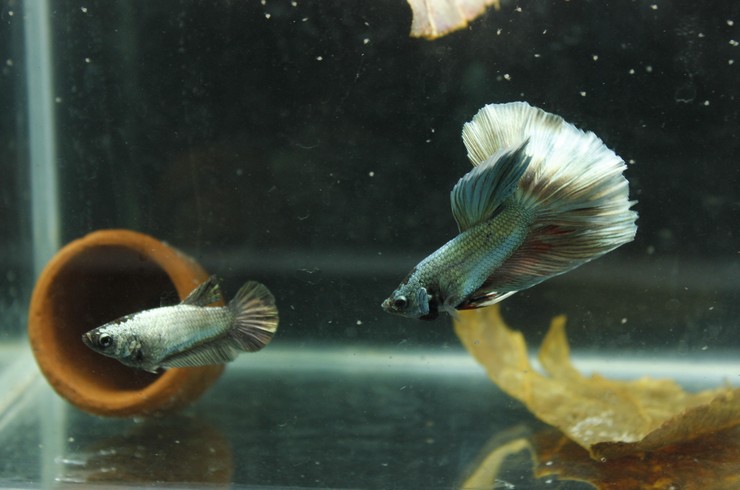 It is best to choose not the youngest individuals for the role of producers, but also not the oldest ones. They should be good-looking and free from diseases. It is worth clarifying right away that if you want to preserve the breed characteristics (color, tail shape, etc.), then you should select individuals that are similar in phenotype. For example, veiled cockerels should be bred only with veiled ones, crown-tailed with crown-tailed, red with red, etc. Of course, no one forbids you to experiment, but sometimes such experiments lead to the appearance of ugly offspring, some signs give splitting. It is known that the dominant color in males is red, which must also be taken into account when choosing mates.

Spawning in cockerels can easily occur even in a shared aquarium. But this method cannot be recommended, because most likely the nest will be quickly destroyed, and the eggs or fry are eaten. And the aggression of the newly-made father increases significantly. It is better to be puzzled by the creation of a separate spawning tank because its volume can be only 15-20 liters. The water level should be 10-15 cm. The soil should not be used, it will only complicate the collection of eggs by the male. Several shelters should be placed on the bottom for the female so that she can hide from the male’s intrusive courtship. It is recommended to put floating plants on the surface of the water, for example, Riccia, Pistia, or Hornwort, which will help the male to build a nest. Do not forget to install the lid, because the males can easily jump out of their home. 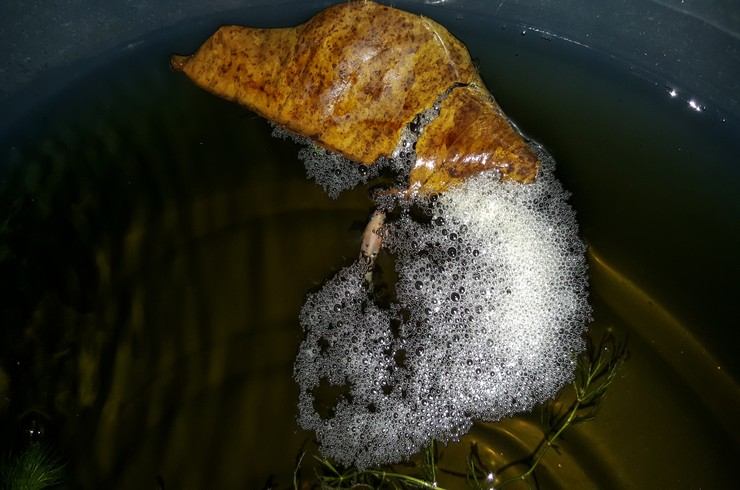 Of the equipment in a spawning aquarium, only a thermostat is needed, which is necessary to maintain a temperature of 26-28 ° C. It is not recommended to install aeration, the airflow can destroy the fragile nest built by the male. It is also worth leaving dim lighting.

Approximately two weeks before the expected spawning, the selected producers are seated in different aquariums and heavily fed with high-protein food. This will contribute to the maturation of eggs in females and a set of strengths for future spawning.

The male is first planted in the spawning grounds, a little later the female is released to him. The breeding process in males usually starts very quickly, but in some cases, it may take several days. It is necessary to monitor the planted fish, especially the male, who may be aggressive towards his partner. Additionally, you can stimulate the fish by increasing the frequency of water changes (it is best to use softer water), as well as adding Tetra ToruMin conditioner with natural peat extract. 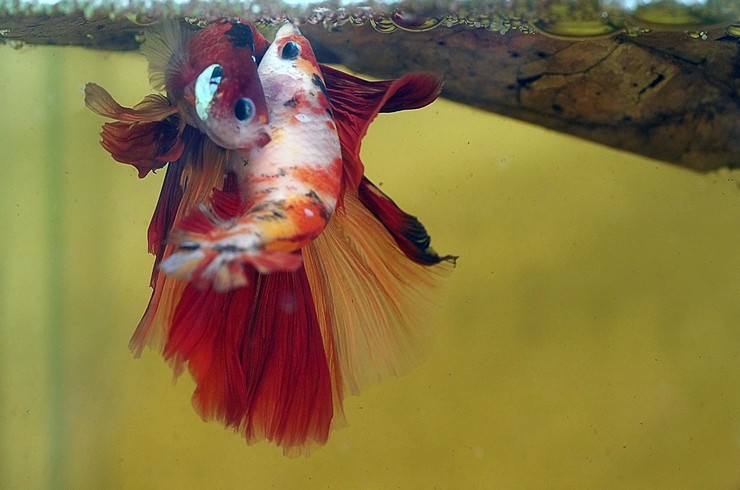 If the male and the female come up to each other, then an exciting spawning process begins. The male rises to the surface of the water and builds a characteristic nest with the help of air bubbles and his own saliva, where the future eggs will develop. The female, ready for spawning, swims up to the nest, the male hugs her and squeezes out a portion of eggs from her, which he immediately fertilizes with his milk. They are white and heavier than water, so they sink to the bottom. The male carefully collects them and puts them in the nest, while the female lies on the bottom at this time. Then the process is repeated until all the eggs from the female’s body are placed in the nest. The fecundity of the female is up to 200 eggs, but usually, no more than a third of them survive.

After the end of spawning, the female should be removed from the spawning grounds, since she can become the object of the male’s aggression. Further, all the care of the offspring falls entirely on the shoulders of the father. It maintains cleanliness in the nest, removes dead eggs, returns the fallen ones to their place. At this time, do not interfere with the male, he should not be fed either. The incubation of eggs takes about a day. 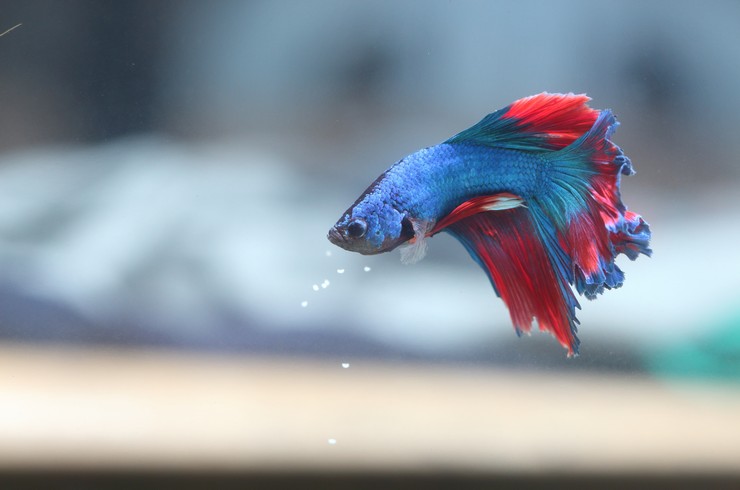 How to tell a female cock from a male

There are usually no problems with determining the sex of cockerels because they are characterized by well-pronounced sexual dimorphism.

In adult female cockerels, an ovipositor is found – a small “grain” near the anus. In light-colored cockerel breeds, if you look closely at the female’s abdomen, you can even see translucent eggs.

In addition, bettas often differ in behavioral characteristics – males are more likely to engage in fights and demonstrate “intimidating” behavior, assuming various poses and protruding gill covers. However, it should be noted that this behavior is often observed in females, therefore, this trait cannot serve as an exact criterion.

Upon completion of incubation, cockerel larvae are born from the eggs. At this time, it is recommended to remove the male from the aquarium and lower the water level to 5-6 cm. You can identify the larvae by a large organ – the yolk sac. It represents a supply of nutrients that the fish embryo needs for further development. At this time, the fry hangs motionless. Within 1-2 days, the supply of the yolk sac dries up, and the larvae become fry, which begins to actively swim in search of food. 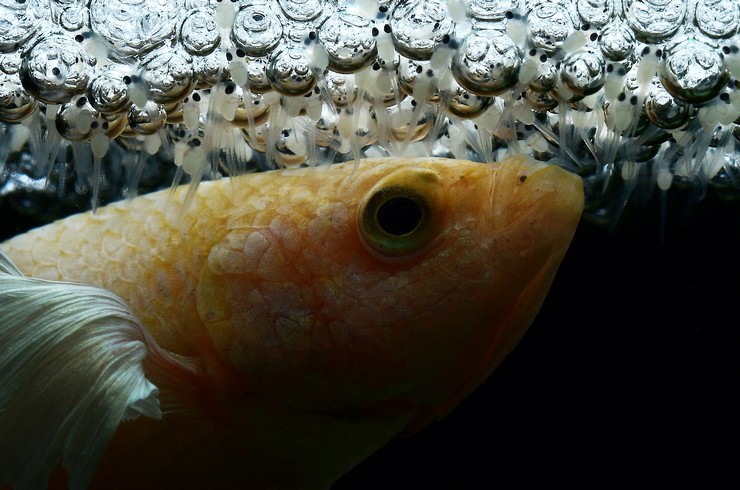 During this time, the fish should be abundantly fed. Starter feed is usually ciliates, followed by brine shrimp nauplii. The reared fry can be transferred to high-quality dry food, for example, TetraMin Baby.

Three weeks after hatching, it is recommended that the first sorting be carried out in the spawning aquarium and the individuals larger than others in size are separated. This will avoid cannibalism.

As the fry grow, the water level should be gradually increased, and aeration should also be organized because the labyrinth organ is formed in males only at the age of about a month. It is also necessary to increase the frequency of water changes (up to 50% of the volume). The temperature is gradually lowered to normal values. 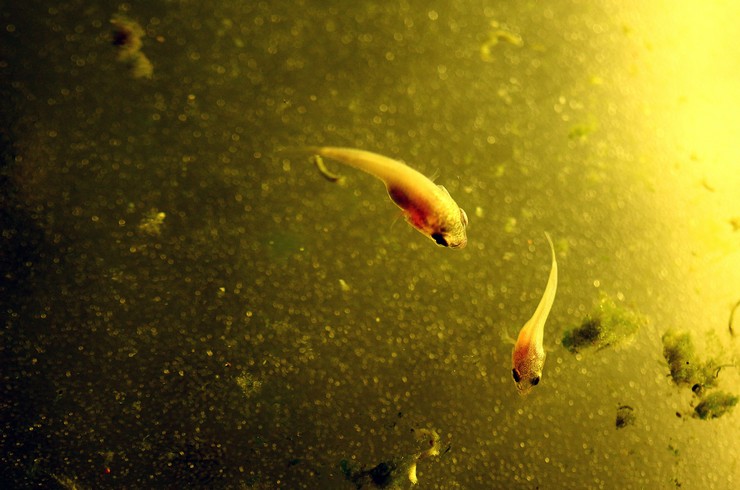 When young male cockerels begin to sort things out, they should be seated in separate containers. Body staining ends at about three months of age.