Gourami fish are very popular pets among a large number of aquarists. They are appreciated for their peaceful nature, attractive coloration, and relatively large size.

Translated from Javanese, “gourami” is literally “a fish sticking its nose out of the water.” And this name, like no other, emphasizes the main feature of these fish. The thing is that gourami have a special respiratory organ – the branchial labyrinth. Previously, it was believed that this organ allows gourami to store water and thus survive drought or move between dry bodies of water. But in fact, the labyrinth allows gourami fish to swallow and use the atmospheric air for breathing. Therefore, they often have to rise to the surface of the water and take a life-giving sip, while, if access to the surface of the water is blocked, the fish may die.

The second feature of gourami is the modified pelvic fins. In fish, they have turned into thin long threads and serve as the organ of touch. Such an adaptation arose in the course of evolution for orientation in the muddy water of typical natural habitats. But even when kept in crystal clear aquariums, gourami fish do not lose the habit of feeling everything with their fins.

It should be noted that the name “gourami” is a collective name. It is correct to call only representatives of the genus Trichogaster (Trichopodus) by this name, but historically it happened so that some species from similar genera also began to be called “gourami” by aquarists.

Most of the gourami species are small fish, they grow no more than 10 cm in an aquarium. However, there are also large species: for example, snake gourami (body length 20-25 cm) or commercial gourami (grows up to 100 cm, but in aquariums, the guest is very rare) …

The body of gourami fish is flattened from the sides and slightly elongated. The pelvic fin extends from the middle of the abdomen and ends with an extension near the tail. The pectoral fins are represented by long thin filaments equal to the length of the body and function as organs of touch. The Latin name of the genus Trichogaster is just derived from the word “trichomes” – thread and “gaster” – belly. In a more modern classification, “gaster” was replaced by “pods” – leg. A tactile whisker after loss is able to recover over time.

The dorsal fin is a clear indication of the sex of a gourami fish. In males, it is strongly elongated and pointed, and in females, it is rounded.

Body-color is quite varied and depends on the species. A fairly large number of gourami color morphs have been developed. Males are colored much brighter than females. Fading color of gourami fish can be a symptom of diseases. 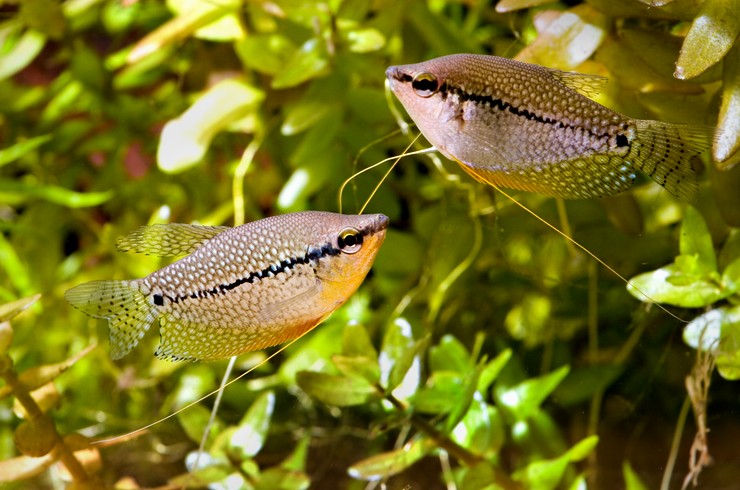 The distribution of gourami as an aquarium species is closely related to the name of the French scientist Pierre Carbonear. In the middle of the 19th century, he was engaged in the acclimatization of animals from the tropics in Europe, including gourami fish. But here he had to face certain difficulties.

In their homeland – in the tropical waters of Thailand, Vietnam, and Malaysia – gourami fish could be found in the most unsuitable places for life: in rain barrels, sewers, rice fields. The water here was often muddy and muddy. This suggested the incredible vitality of the gourami. But any attempts to deliver at least a few specimens to the Old World ended in disaster: all the fish died along the way. After numerous failures, the gourami was considered a problem fish and its distribution slowed down. And only twenty years later it was possible to find out the reason for the constant death of this unpretentious fish on the road.

Unfortunately, at that time people did not have knowledge about the peculiarities of labyrinth fish and the need for their access to atmospheric air. The captured settlers were put in barrels poured to the top and tightly sealed. In such conditions, gourami died en masse, often without even starting their sea voyage. And only after the barrels with fish began to fill only 2/3, it was possible to deliver the first specimens to Europe. It happened in 1896.

Gourami was first brought to Russia by A.S. Meshchersky, a well-known amateur aquarist, who purchased them directly from Pierre Carbonear. A great contribution to the distribution of these beautiful fish was also made by Paul Matte (who brought his collection from Germany) and V.M. Desnitsky, who received gourami fish directly from Singapore. 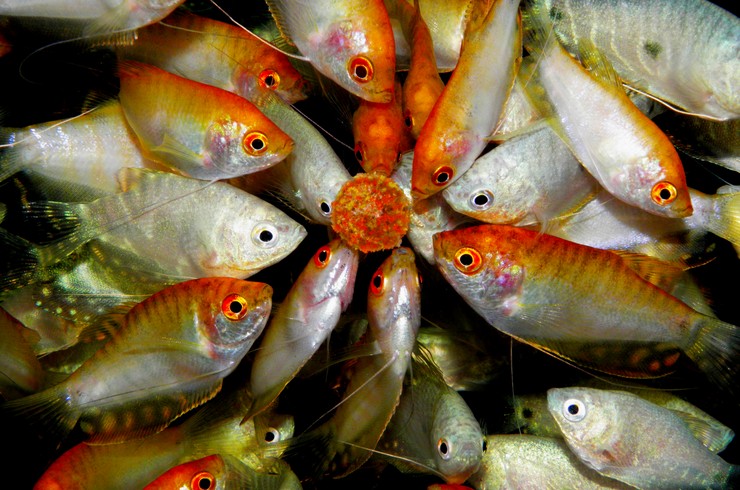 The main zone of distribution of gourami is Southeast Asia and the adjacent islands. The widest range is at Gourami spotted (Trichogaster trichopterus). It lives in vast areas from India to the Malay Archipelago and produces many local color variations. On the islands of Sumatra and Borneo, you can find pearl gourami (Trichogaster leer) everywhere. Thailand and Cambodia are the birthplaces of the Lunar Gourami (Trichogaster microlepis). Due to their unpretentiousness, gourami fish were introduced in places where they were not historically found: on the island of Java, in the waters of the Antilles in Central America. Often the appearance of these species is associated with aquarists who release aquarium fish into nature.

Gourami can be found both in the flowing waters of rivers and streams and in stagnant bodies of water bodies, which at first glance seem uninhabitable. Some species (spotted and brown gourami) can tolerate a slight increase in salinity and therefore are found in high tide zones and at the mouths of rivers flowing into the ocean.

Gourami is rightfully considered one of the most unpretentious fish. Excellent endurance and the presence of an additional respiratory organ allows them to adapt to various water parameters and calmly endure the absence of forced aeration.

When choosing an aquarium, it is necessary to take into account, first of all, the size of adult gourami fish. If an aquarium with a volume of 20 liters per pair is suitable for a dwarf or honey gourami, then for larger species it is best to provide at least 80-100 liters. It is best to keep several females for each male, this will reduce intraspecific aggression. It is advisable to put dark soil on the bottom, in this case, the color of the gourami fish will look more contrasting.

A very important point when keeping gourami is the presence of coverslips in the aquarium. This will solve two problems. Firstly, the layer of air above the surface of the water will not cool much, and gourami fish will not damage their rather sensitive labyrinth due to the temperature contrast. Secondly, the glass will protect especially jumping individuals from death. 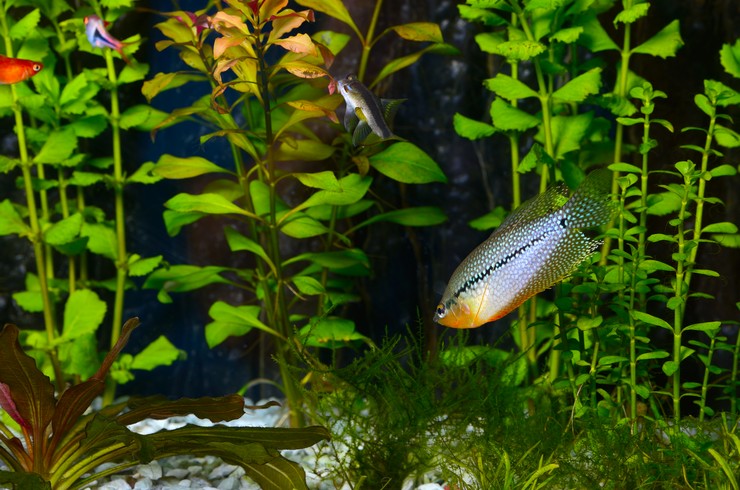 Due to their hardiness, gourami can easily exist in a wide range of hardness and acidity, but the most optimal parameters are slightly acidic water (pH = 6.0-6.8) and hardness up to 10 ° DH. A more significant parameter is the water temperature, it is recommended to maintain it at the level of 25-27 ° С, and even up to 28-30 ° С during spawning. The fish do not tolerate cold water, they begin to hurt. Therefore, it is necessary to install thermostats in aquariums with gourami.

For gourami, it is desirable to provide good filtration, but without a strong flow of water, since in nature, most species prefer reservoirs with stagnant water. The presence of aeration is necessary for the normal operation of the nitrogen cycle, the gourami fish themselves can safely do without it.

It is highly advisable to place live plants in the aquarium with gourami fish, which are best planted in groups so that there is both a place for swimming and dense plantings. Timid fish will be able to hide in dense vegetation if necessary. It is also useful to have floating plants on the surface of the water (riccia, pistia). They will dim bright lights and allow males to build bubble nests as needed. It must be remembered that plants should not completely cover the surface of the water, as gourami need to float periodically to swallow air.