In tropical aquariums, decorative catfish are difficult to do without. They not only revive the lower layers of the water with their presence, but they are also excellent “orderlies” of the bottom, eating the remains of food that fell down. Speckled corridors are in the top 10 most popular aquarium fish and are prized by aquarists for their unpretentiousness, interesting behavior, and help in keeping the aquarium clean.

Speckled catfish (Corydoras paleatus) is a freshwater fish from the Armored catfish family. One of the most common and well-known aquarium pets. It is difficult to find a tropical aquarium in which these fidgets do not live.

The species was first described in 1830 and quickly became popular with hobbyists at the time. It is one of the first fish, the offspring of which were obtained in captivity. It happened at the end of the 19th century in Paris.

As with many aquarium fish, in the beginning, only wild specimens caught in nature were supplied for sale. However, now they are massively bred both on special farms and at local breeders since the breeding process is quite simple.

Speckled catfish, due to their hardiness, can be recommended for the maintenance of novice aquarists. Like other members of the family, speckled corridors have intestinal respiration, that is, they are able to assimilate atmospheric oxygen in a special part of the intestine. To do this, the fish periodically rise sharply to the surface and take a “breath” of air, after which they return to the bottom. If the corridor began to do this very often, it is worth checking the operation of the compressor. 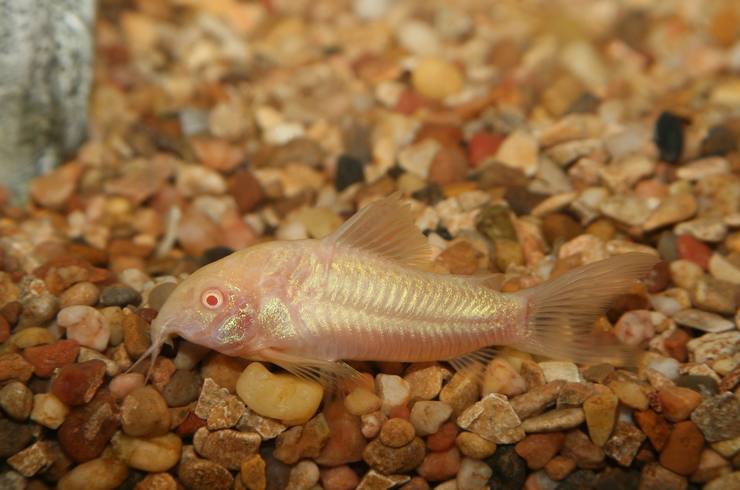 An interesting feature of the corridors is the ability to make sounds due to the movement of the pectoral fins. You can usually hear young individuals when frightened or a spawning pair.

This species is predominantly nocturnal, but with regular feeding at a certain time, the fish are able to swim out during the day.

The corridors have a body shape typical for armored catfish. It is dense, compressed in width, with a characteristic convex back. On the sides of the body are two rows of dense bony plates, which serve to protect against predators, but make the fish a little clumsy.

The mouth is lower, with three pairs of sensitive antennae that help the corridors to dig in the ground and navigate in troubled waters. The eyes are large and mobile. The dorsal fin is high, the adipose and pectoral fins have spines, so you need to be careful when catching catfish with a net. 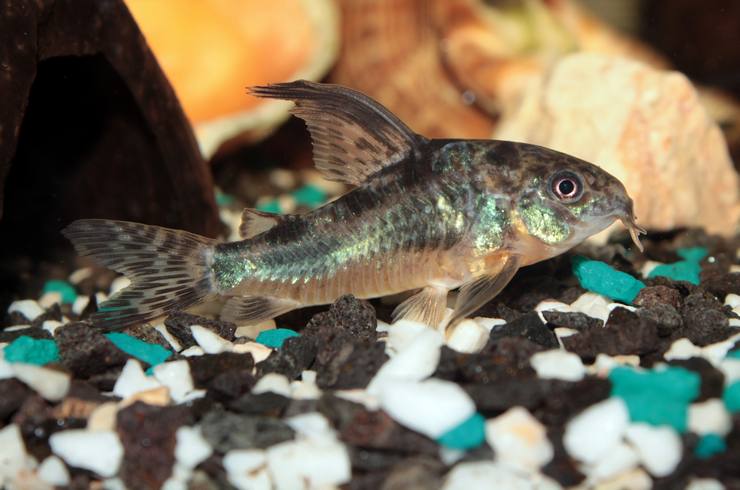 The main body color is greenish-gray and a large number of spots forming a speckled pattern, for which the fish received its specific epithet. The abdomen is light, with a golden tint. The fins are transparent, with specks. Albino (white body and red eyes) and veiled, with highly developed fins, forms were bred.

The homeland of speckled catfish in South America. It can be found in the basins of the Amazon, La Plata, Parana rivers in countries such as Argentina, Brazil, Paraguay, Uruguay.

The fish prefers stagnant or slow-flowing bodies of water: river tributaries, ponds, swamps. They live in flocks. During the day, the fish hide in dense thickets of aquatic vegetation, at night they go out in search of food: worms, crustaceans, insects. 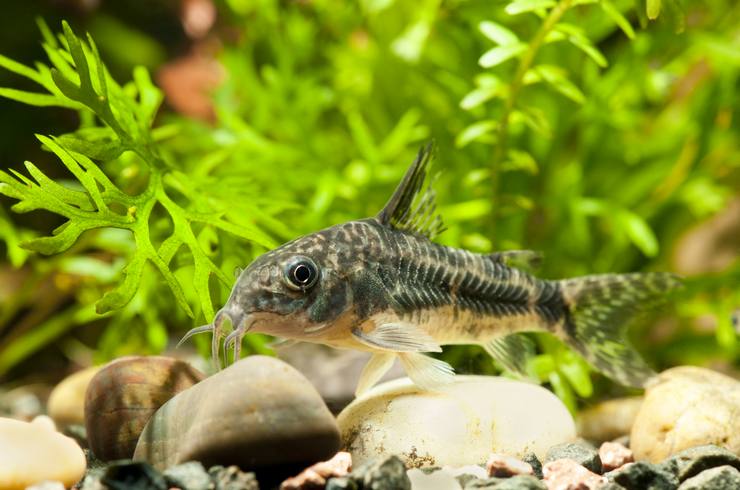 It is necessary to keep speckled catfish in small flocks of 5 or more individuals. The recommended volume of the aquarium is 60 liters. Coarse sand or rounded pebbles are ideal as rocks with sharp edges can injure the delicate tendrils of catfish. Provide the fish with a large number of shelters made of driftwood, rocks, grottoes. In their free time, speckled catfish like to hide in such shelters. 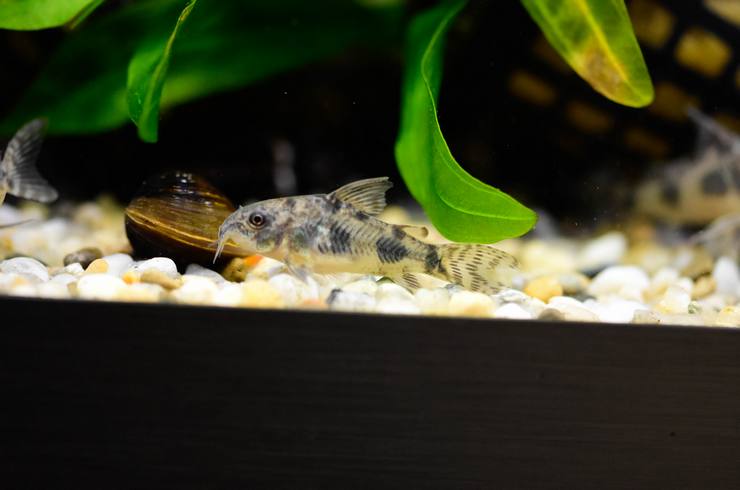 Live plants in aquariums with speckled corridors will come in handy. They not only serve as habitual hiding places for catfish but also contribute to creating a comfortable environment in the aquarium. Since catfish do not bite the leaves of plants, you can dwell on any popular species: Vallisneria, Cabomba, Cryptocoryne, Echinodorus, etc.

Corridors are lovers of clean water, so take care of high-quality filtration and aeration. The current should be low to moderate and the lighting should be muted.

Speckled catfish are very sensitive to water quality: high concentrations of nitrogenous compounds lead to the death of the antennae. Therefore, it is necessary to monitor the water parameters and make weekly changes in the amount of up to 20% of the volume of the aquarium. 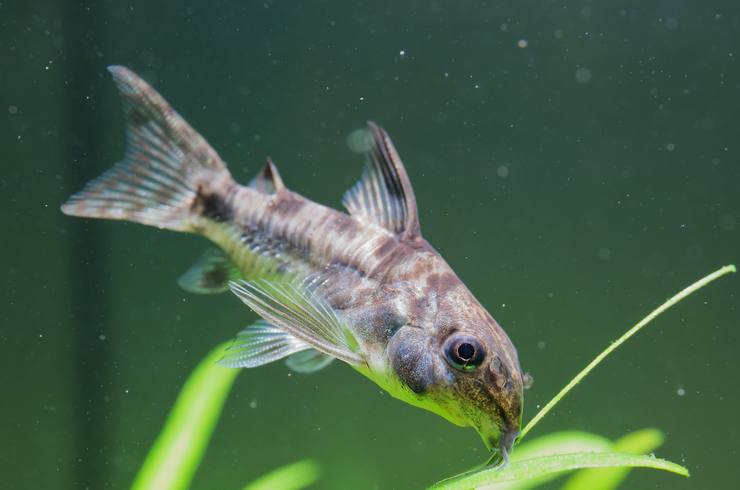 Speckled catfish are compatible with almost all peace-loving fish. It is best to keep the corridors in flocks. Peaceful barbs, danios, viviparous, killifish, neons, tetras will become excellent neighbors. They get along well with other types of corridors, dwarf cichlids.

It is worth avoiding neighborhoods with large predatory fish, which, despite the powerful shell of corridors, can swallow small catfish. It is also worth noting that speckled catfish do not like high temperatures in the aquarium, so it is also better to refuse content, for example, with discus.

Speckled catfish are completely picky about food and eat everything that falls to the bottom of the aquarium. Although they are able to float to the surface to eat floating food, it is more comfortable for the fish to feed near the bottom. It is best to use special sinking tablets for catfish for feeding. They quickly sink to the bottom and retain their shape for a long time. In order not to accidentally introduce an infection into the aquarium, it is better to refuse to use live and frozen food.

Tetra Cory ShrimpWafers, specially designed for all types of corridors, are a good choice for feeding speckled catfish. A diet high in shrimp is rich in essential omega-3 fatty acids to promote healthy growth. Due to their special consistency, the plates do not pollute the water.

It is better to feed the corridors in the evening, after turning off the lights.

In addition to the general unpretentiousness in content, speckled corridors are also distinguished by ease of reproduction. Often spawning occurs spontaneously, right in the general aquarium. But to get the maximum offspring, it is best to organize a separate spawning tank with a volume of 30 liters or more. At the bottom of the spawning box, you need to put flat stones, driftwood, or plants with wide leaves.

Sexual dimorphism is weakly expressed: females are usually larger and have a more saturated body color, the dorsal fin is short and rounded.

It is best to plant and feed abundantly a week before spawning. 1 female and 2-3 males are usually planted in the spawning ground. The stimulus for spawning is the addition of fresh cold water. The fish are placed in the aquarium in the evening, and the process itself begins with the first rays of the sun.

The fertilization process is rather unusual. First, the males chase the female, after which she picks up milk in her mouth, and lays the eggs in the folded pelvic fins. After that, the female finds a suitable place, lubricates it with milk, and glues the eggs. This will increase the percentage of fertilized eggs. The fecundity of females can reach 200 eggs.

After spawning, the producers must be transplanted. The development of eggs takes about 5 days. At this time, it is best to raise the temperature in the spawning grounds to 27-28 ° C, which will accelerate the maturation of the eggs and reduce the risk of fungal attack. The fry of the speckled corridors are quite large, and feeding problems usually do not arise. Small catfish calmly eat tablets for bottom fish. By the age of one month, the size of the fry is about 1 cm. Sexual maturity occurs at the age of 8 months.