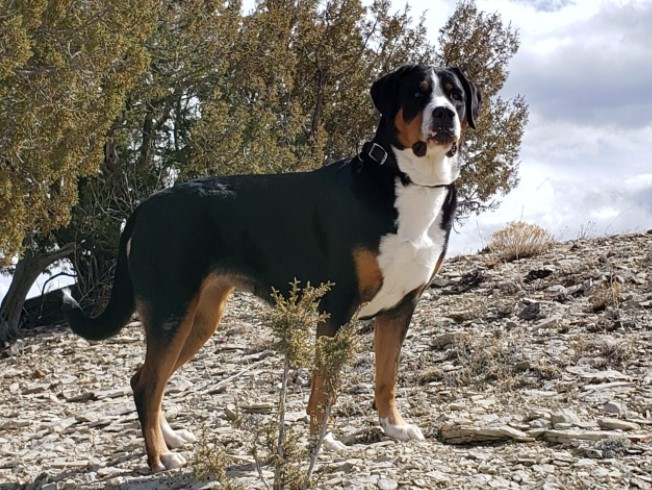 In modern cynology, the correct version of the origin of dogs is considered to be the path from the Tibetan Mastiff through the ancient Roman Molossians to the Central European Mastiffs and then to the Mountain Dogs. In Switzerland, dogs did the same job as in other countries. Large dogs were guards and shepherds, and small dogs were watchmen. For centuries, local breeds were formed spontaneously, without human participation, but this did not prevent them from acquiring a certain type and characteristic color.

After the monks began to use dogs (today’s St. Bernards) as rescuers, the two-tone dogs from Bern became very popular. Two-colored fluffy dogs began to be sold for a lot of money, as a result, they practically disappeared in Switzerland. But tricolor dogs, which were considered outbred, survived. It was they who became the basis for the creation of all types of Mountain Dogs. In total, the group includes four breeds:

As for the Greater Swiss Mountain Dog, it owes its appearance to the Bernese Mountain Dog breeder Franz Schertenleib. It was he who decided that large tricolor dogs also deserve attention, and for the first time brought the Short-Haired Mountain Dog to an exhibition in Langenthal in 1908. He managed to prove that these are representatives of Large Mountain Dogs, which have almost disappeared. In 1909 the breed was recognized by the Swiss Kennel Club. And already in 1939, the first standard was published and the breed was registered in the VFC. By the way, it is the Great Mountain Dogs that are considered the ancestors of the butcher dogs, from which the Rottweilers descended. Although the Greater Swiss Mountain Dog was originally bred in Switzerland, today the main livestock is concentrated in Austria and Germany. 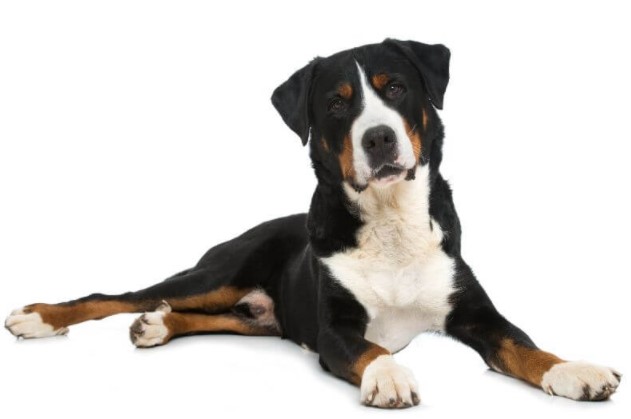 The head is strong, but not heavy, in males, it is more massive. The forehead is wide, flat, the frontal groove narrows towards the apex of the nose, the tubercle on the back of the head is poorly visible. The nose should be black. The muzzle is strong, not pointed, longer than wide. The nasal bridge is straight. Fleshy lips fit well to the jaw. Scissor bite, missing teeth allowed. The eyes are almond-shaped, medium-sized, light brown to dark brown in color. The eyelids are fully pigmented and close-fitting. The ears are triangular in shape, of medium size, set high. In a calm state, they hang down, pressing against the cheekbones, and when the dog is excited, they are raised on the cartilage and turned forward. The inside and outside of the ears are covered with wool.

Neck with a powerful nape. The body is slightly elongated. The back is strong and straight. The croup is wide. The ribcage is wide, slightly sloping, oval in section. The dog’s belly is slightly pulled in. The tail harmoniously continues the topline. It is heavy and reaches the hocks. In a calm state, it is lowered, held by a weak bend, and in motion it is slightly raised and curved. Legs are strong, powerful straight. Paws are round, closed, with strong nails.

The coat is double and consists of a dense topcoat of short to medium length and a softer dense undercoat that can be dark gray or black in color. The color is the only tricolor. The main color is black, with symmetrical reddish-brown markings that are located on the cheeks, above the eyes, on the inside of the auricle, on the sides of the sternum, on all four legs, and at the base of the tail. A pure white mark is found on the head, throat, chest, and legs (forming “toes”) and also on the tip of the tail. It is important that there is a black stripe between the white forehead stripe and the brown markings above the eyes. The white color can cover the entire neck, forming a collar. 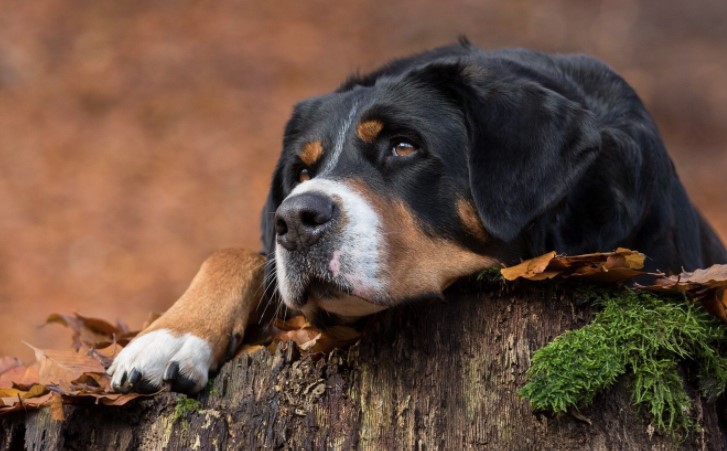 The Swiss Mountain Dog has a good character. Pronounced features are nobility, fearlessness, equanimity, and poise. Greater Swiss Mountain Dogs are calm, but by no means slow. Neither shyness nor aggression is inherent in them. The menacing appearance of a large dog makes you treat it with apprehension, but it will never bark unnecessarily. By the way, their aggression usually starts and ends only with barking. Especially diligently these dogs will protect women and children.

They are excellent guard dogs that pay attention to every little detail.

It will be very easy for a person to become a leader for this dog because he needs a just patron and does not seek to dominate. Dogs get along well with other animals, especially if they are familiar with puppyhood. 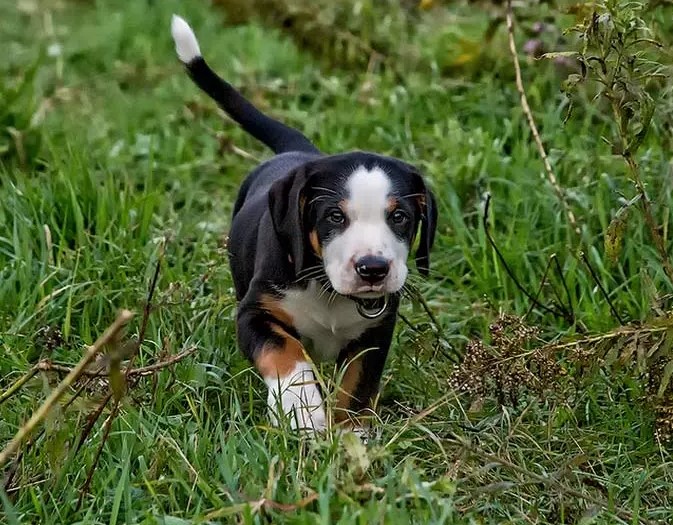 The Greater Swiss Mountain Dog is not suitable for keeping in an apartment. He will be comfortable in a private house with a large yard or on a farm, where he will be happy to do the work of a guard dog and a security guard. Greater Swiss Mountain Dogs need regular communication with the owner and family members, do not tolerate loneliness, and are completely unsuitable for keeping on a leash or in an aviary, which should only serve as a shelter from rain and sun. Even if the dog lives in a large yard, he needs regular long walks. Bicycle jogging, swimming will be excellent activities. When walking the Mountain Dog, it is worth remembering his bad habits. He can find something very foul-smelling and fall out in it, or he will suck in his mouth everything that comes his way. From all this, it is better to wean the dog from childhood.

The Greater Swiss Mountain Dog is absolutely undemanding in terms of grooming. It is enough to comb the dog once a week to remove old hair. A little more often, the procedure will have to be carried out during the seasonal molt. It is undesirable to completely bathe the dog; this is done only when absolutely necessary. It is advisable to teach you how to brush your teeth from early childhood, then it is done regularly using a special brush and veterinary toothpaste. If the dog does not grind its nails on its own, they should be trimmed, the ears are cleaned as needed. 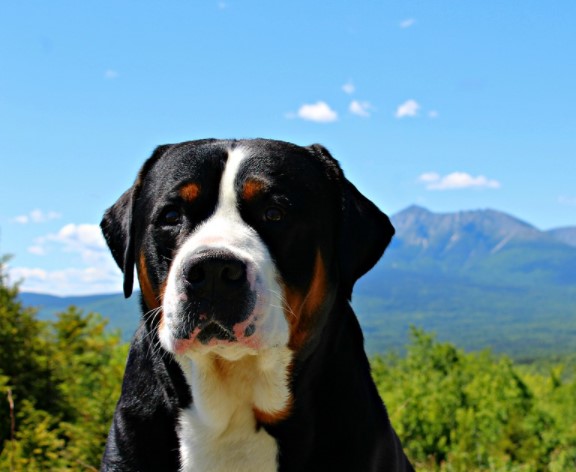 In general, Swiss Mountain Dogs are very strong and hardy, have good immunity, are resistant to stress, and easily adapt to new conditions. But the breeding work left its mark on the breed in the form of a number of hereditary diseases:

This does not mean that all these diseases will be in one dog. They may not exist at all. It’s just that all these pathologies and diseases are most often found in representatives of the breed. Routine vaccination and regular treatment against external and internal parasites should be part of proper dog care. Life expectancy is usually 10-12 years.