Old English Sheepdog’s country of origin is Great Britain. Initially, the British bred a dog that would be a versatile farmer’s assistant, a reliable shepherd, and a formidable watchman. Modern representatives of the breed are rarely used for their intended purpose, and, as a rule, are just companions, but they have not lost the skill of a reliable guard. 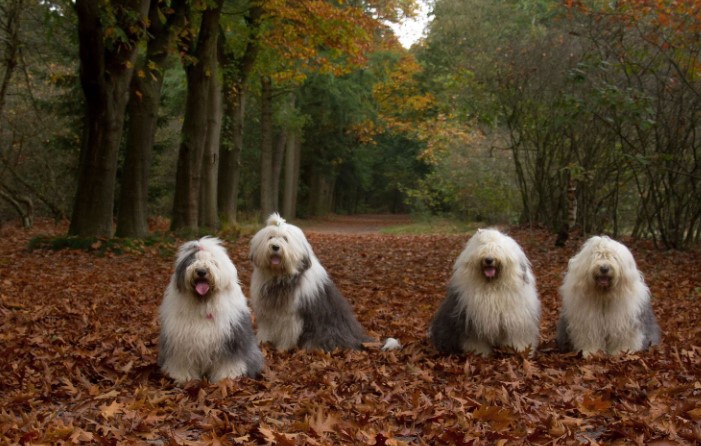 Several centuries ago, when Old English Sheepdogs were just being bred, their temper was much more severe, which was demanded by the status of a universal farmer’s dog. Presumably, her ancestors are the Briard and the South Russian Shepherd Dog. The ancestors of the modern Old English Sheepdog were distinguished by their rude habits and a somewhat loose physique. They were used mainly as guards and beaters, and more mobile Collies were often used to help.

For the first time, the distinctive beauty of the Old English Sheepdog attracted public attention at an exhibition in 1873, when the dogs were already exhibited as a separate breed. 15 years later, the first breed club was organized, and the former village dogs began to flicker on the lawns of the living rooms of the English elite. The breeders, in turn, continued to test the working qualities of the breed, but at the same time, they tried to soften its appearance and character. The resulting Old English Sheepdog turned into a charming family dog. 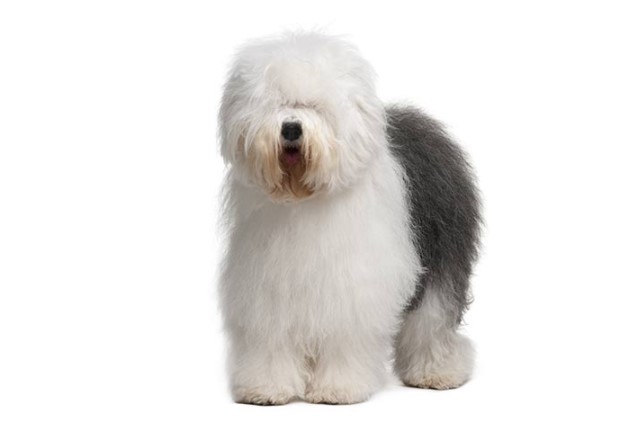 Outwardly, large and somewhat square dogs seem heavy and clumsy, but their appearance is deceiving. The movements of the Old English Sheepdog are quite light, while running, they are slightly springy. The head is massive with a square skull. The coat is thick, long, and slightly wavy, slightly shorter on the muzzle than on the body. The eyes and nose are small and always dark in color. The ears are tiny and almost completely hidden under the fur. The limbs are long and straight. The tail was previously docked by standards, but today dogs with uncut tails are also allowed. Old English Sheepdogs come in any of the shades of gray and white. 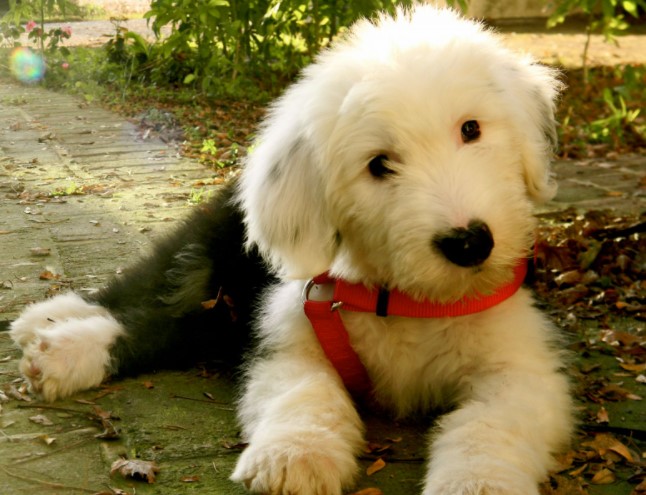 Old English Sheepdogs are strong and resilient dogs that are quite easy to train, love to work, and take on new tasks with pleasure. It is important for owners to take into account that representatives of the breed can be very strong-willed and independent, so they need to be instilled in any desirable habits from early childhood. Each dog needs an individual approach, in education, it is better to try several methods and determine which one is more suitable for the pet. But, as a rule, it is motivational that is the best option. With a goal in mind, dogs become interested and more attentive.

Physical activity should be intense enough. Old English Sheepdogs need an active and long walk in the fresh air, preferably without a leash. Only outwardly they seem measured and clumsy, but in fact, they are very energetic and always ready to support the game. 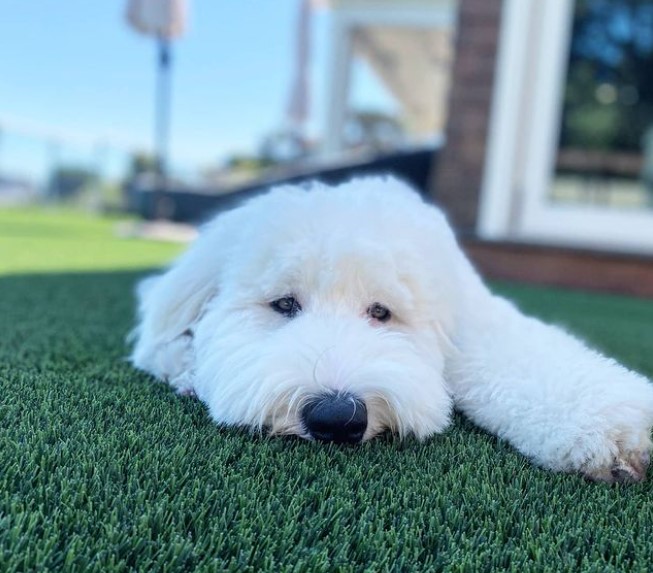 Old English Sheepdogs are quite calm and friendly, but by no means phlegmatic. They are not prone to fighting, but the innate instinct of the shepherd tells the dog to selflessly defend the territory and the owner, to whom it is selflessly devoted. Old English Sheepdogs know how to listen to the owner and understand his intonation. They love to play and communicate, but they always know when to stop, if the pet sees that the owner is not disposed to play, then he will not annoy.

Old English Sheepdogs are very sensible and calm dogs. They always behave somewhat restrained and pranks are allowed only with the permission of the owner. Natural shepherds can work tirelessly for hours. Often they try to apply their instinct as a pastoralist to family members, so it is important from early childhood to teach Old English Sheepdogs to respect others. Representatives of the breed prefer to be close to home, so they rarely get lost. With the right approach and education, the pet will be obedient and submissive, but if not given proper attention, it can become rude and independent. 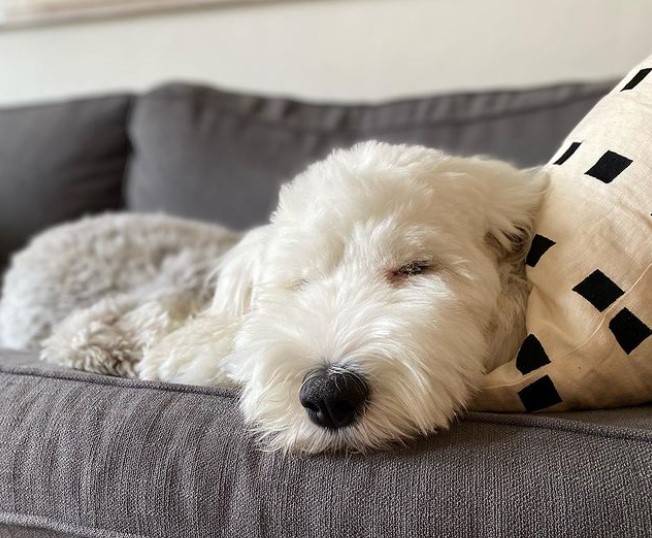 Dogs of the Old English Sheepdog breed are best kept in a private house, in an apartment, it is possible only if it is spacious enough. After all, they need regular walking and bypassing the territory. Old English Sheepdogs are very peaceful, they get along well with other pets.

Looking at the Old English Sheepdog, you can immediately imagine how difficult it will be to care for the coat, which, by the way, despite its length, does not have a pungent odor. There are two types of grooming: home and exhibition. Puppies are born short-haired and up to 2.5 years old have time to change their coat three times.

Bathe dogs as they become dirty. If the animals are preparing for the show, they take water procedures two weeks before the show. Dry the wool exclusively with a hairdryer in the cold blowing mode. Particular attention is paid to the ears, they are periodically cleaned and cut, the wool growing inside. It is also recommended to trim the hair between the toes and pads. In the warm season, the dog is given a short haircut all over the body, otherwise, there is a high risk of heatstroke. The nails are trimmed as they grow. Monitor your dog’s teeth closely. 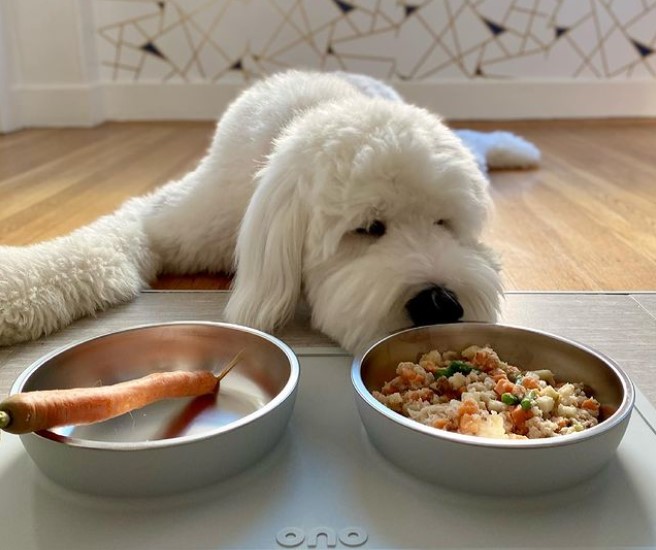 Feeding the Old English Sheepdog must be thoughtful and nutritious. It is important that it contains all the nutrients the dog needs and is consistent with physical activity. It is better to give preference to natural food. Bowls of food and fresh water should be placed on a stand so that the dog does not have to lower his head too low. If you prefer to feed your dog with ready-made food, then, of course, in this case, you should use high-quality holistic or at least super premium food.

Throughout the pet’s life, special attention is paid to the ears, which are the weak point of the breed and are prone to inflammation. Among hereditary diseases, there is a certain predisposition to problems with vision and hearing. Dysplasia of the hip joints is possible. Life expectancy is up to 13 years.